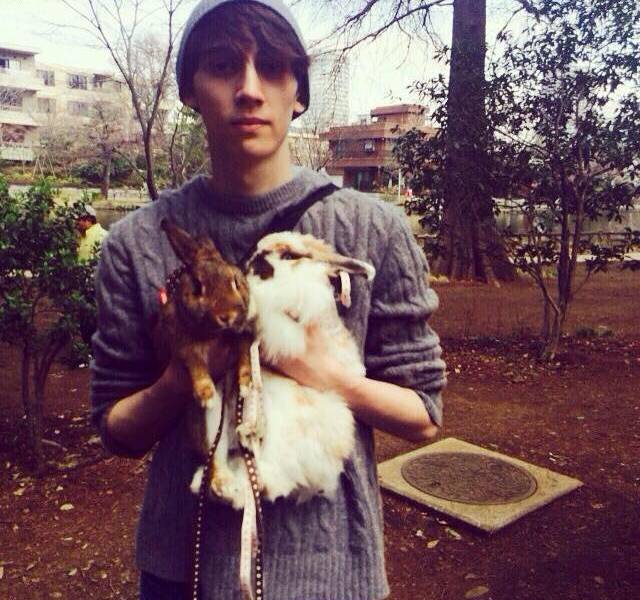 Everyone, say hello to Aaron: a full-time animal-loving, movie-quoting penny-wise wiseguy from Arkansas. Oh, and sometimes he writes for us here at Tokyo Cheapo. When he does, he likes to ponder “What are the top neighborhoods to live in?”, “Can a 100 yen shop really save my life?” and “Are you too sexy for your shirt?”.

I’ve been in Tokyo for almost four years now, and I still can’t speak Japanese. Laziness at its finest.

When I was a kid I grew up watching Samurai, Godzilla and Kurosawa films on AMC. I was also obsessed with Dragonball Z and Tenchi Muyo. I never really thought about going to Japan though. Then while looking for schools, I just randomly Googled “schools in Japan” and found Temple University Japan Campus.

I basically just winged it and decided to come on a whim. Then I just never left.

My first job in Japan was working at Butler’s Cafe in Shibuya. It was basically like an Akihabara maid cafe, but with foreign men working as butlers for women.

After that I mostly job-hopped as an English teacher. It too was awful. A lot of schools just want a foreign face, and I was basically a mascot. It was terrible pay and terrible hours. I finally found a legit company with legit hours and legit pay.

Now I get paid to have fun and be silly with kids.

Aside from teaching English, I’ve modeled for tons of magazines and fashion shows in Japan. I’m usually just freelance, but I’ve worked with agencies too. I only do that kind of stuff now if editors or stylist call me directly because I hate going to auditions.

Of the writing jobs I do, apart from Tokyo Cheapo, I help with a subscription company called Candy Japan. They send candy and snacks to people outside of Japan, and I write up their bi-weekly newsletters for subscribers, and sometimes help out with the PR part of things.

4) Briefly describe a typical day in your life

A typical day for me is waking up, drinking black coffee, eating whatever I can for 108 yen, and catching the latest train possible that will still allow me to get to work on time.  Then just having fun and teaching kids English.

I used to do a lot of blogging, but have since moved on to “vlogging.” I’m more into making and editing videos now, but I still like to write. If Tokyo Cheapo wants me to write something up, I’m always down. While Candy Japan just has me write up newsletters, I still like to make them as informative, fun and entertaining as possible. It always makes me smile when I read a review and someone has mentioned the newsletter as a positive.

A couple of times stylist and editors have asked me to copy edit the English for their projects, but I’m always paid under the table and never mentioned in them.

I really like trains. I kind of hate driving, and come from a small town. I never rode on a train until I came to Tokyo, and now I’ll never live anywhere again that doesn’t use them. I also really like not having to tip.

Some things I really dislike about living in Tokyo are pet shops, key money and the Immigration Office. I also really dislike that if you don’t drink, there isn’t much to do at night after nine.

Besides food and rabbits, it goes towards video games and day trips. Sometimes a pricey love hotel can be just as nice as a day spa. 😉

If you have pets, stay out of pet shops. I get all my pet food and supplies from Amazon and large department stores like Seiyu. It’s always cheaper. And if you have a cat or rabbits, use cardboard boxes for toys. They’re free!

If you like video games, always buy used and stay out of Akihabara. I never go to Akihabara for videogames. Going for computer parts, accessories and electronics is another story, but you’re wasting your time and train money by going for video games. Also, if you have any income made in US dollars instead of yen, go digital or use it on Amazon.jp.

Living next to a 100 yen store will save your life. If I’m on a tight budget, I’ll do all my shopping at my local Lawson 100. That includes stuff like toothpaste, laundry detergent, shampoo, etc. If that’s not your style, get a Costco card, and every two or three months go load up. I’ve had a box of heavy duty trash bags from Costco that I bought for 1,600 yen have lasted over a year. But don’t buy food there unless it’s the Kirkland’s brand.

Bonus: Find a girlfriend that likes to cook.

10) Where can people/stalkers find out more about you?

My is my most active account. I’m also pretty active on Instagram. I also have a that I’m trying to get going, and a long since abandoned blog that I plan on rebooting called Gaijin Edge.

Written by: Adriana Paradiso
Adriana's Tokyo favorites are: Mizumoto Park, Gokokuji Temple Tokyo
Filed under: Editorial
Sharing
Questions or comments about this article?
Start a thread on our community forum
Ask our local experts about Tokyo