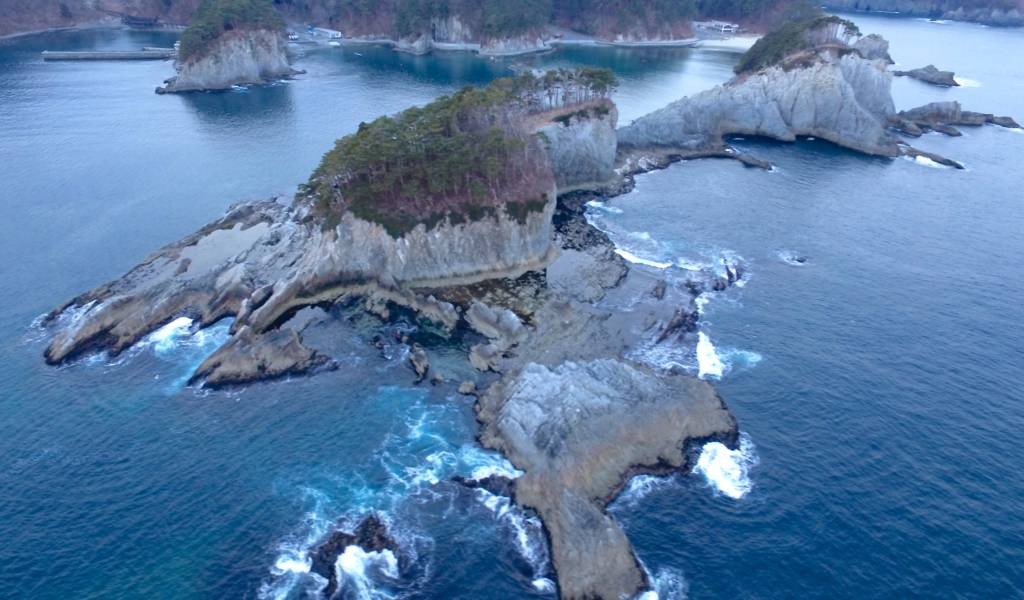 Tohoku, the northern part of Japan’s main island Honshu, is well known for beautiful onsen, some of Japan’s best sake and traditional parades and festivals. Four of Tokoku’s six prefectures make up its impressive Pacific coastline—Fukushima, Miyagi, Iwate and Aomori. Sadly, Tohoku’s North Pacific coastline also became the unfortunate poster child of a disaster-struck region having to rebuild itself from ruins after the 3/11 earthquake, tsunami and nuclear accident.

Yet, Tohoku’s people have shown to be as rugged and resilient as the area itself. Those that travel along the almost-1,000 kilometers of stunning coastline with breathtaking rock formations crowned by the characteristic Japanese pine will find that visitors are very welcome in these more remote parts of Japan. Walk, hike, and cycle through some of Japan’s most iconic nature and enjoy some of the freshest and tastiest seafood, beef and sake the country has to offer.

With a direct 90-minute Shinkansen connection from Tokyo, the city of Sendai is the ideal starting point for adventures in Tohoku. Sendai is a bustling metropolis; and with just over one million inhabitants, it’s one of the largest cities in Japan. Sendai is the ultimate symbol of Tohoku’s recovery from the Great East Japan Earthquake, which is memorialized in the Sendai 3/11 Memorial Community Center and the Arahama Elementary School. It is further home to the Kirin Beer Sendai Brewery, the Sendai Castle ruins, a vibrant nightlife district and the home of grilled beef tongue.

Things to do in Sendai

Date Masamune, the 16th- and 17th-century samurai warrior, is indelibly inked into the consciousness of the Tohoku people. Date ruled from the top of a hill overlooking the city of Sendai. Only the ruins of Aoba Castle remain today, but it is a peaceful spot with a great view. In addition to the castle, a mausoleum, a shrine, and the statue of Data Masamune on horseback draw visitors up to the fortress. There is also a tour guide program with guides in cosplay from the Edo era on offer. Get off at the Loople bus stop 6 to get here.

At the Sendai 3/11 Memorial Community Center, visitors can learn about the tragedy that happened through pictures and object, but the most moving are the stories of survivors of the disaster. The center is designed as a communication and exchange platform that connects peoples’ memories and experiences to future generations. There is nothing else quite like it in Tohoku. To get here, take a train from Sendai Station to Arai Station for about 13 minutes. The center is open from 10 am to 5 pm on all weekdays apart from Monday. It is best to check its website beforehand for random holidays.

Another tsunami memorial is the Arahama Elementary School where several hundred children and teachers escaped the flood on the roof of the building; they were later rescued to safety. The ruins are open to the public from 10 am to 4 pm. Check the website for closed days. The closest station is also Arai Station so you can easily visit both sites in one tour.

Kokubuncho is the largest nightlife district in Tohoku. It is located just outside Sendai Station, extending north to south between Jozenji-dori and Hirose-dori streets. With 3,000 restaurants and bars, many people flock to this area from dinnertime until the wee morning hours. This is the place to get your grilled gyutan (cow tongue) fix—a must for anyone visiting Sendai.

How to get to and around Sendai

Tohoku Shinkansen trains leave Tokyo Station several times a day for Sendai. It is a 90-minute direct ride. Sendai has a good local train network and additionally, the Loople sightseeing bus loops around the city’s most famous sights. The bus runs from 9 am to 4 pm every 15 to 20 minutes. It is just ¥260 for a single ride but you might want to get the ¥620 day pass which is great value.

Matsushima Bay is dotted with more than 250 islands—rocky, uninhabited, and covered in pine trees. The bay offers the quintessential Japanese sight that will transport you straight into a Hokusai hanging scroll. Celebrated as one of the “Nihon Sankei” (Three Views of Japan), Matsushima Bay is impressive on its own, but is also an excellent way to get a glimpse into what happened on 3/11 while appreciating natural beauty at the same time.

Things to do in Matsushima Bay

Take a cruise of the bay to hear stories about how high the tsunami reached on the fateful day and how the landscape has changed. There are several cruise companies to choose from in Matsushima Bay. Generally, cruises last between 25 to 50 minutes, cost between 1000 and 1500 yen and depart frequently.

From Matsushima Kaigan Station, it is a brief walk to some other famous sites of the area, including Zuiganji Shrine, Godaido Temple, Entsuin Temple, and the Kanrantei Tea House. Those sites are relicts of Buddhist history dating back to the 8th century and display the power and character that Daimyo Lord Date Masamune possessed in the area. Besides wandering around, you can also enjoy a tea ceremony and experience making a Buddhist bead bracelet.

How to get to Matsushima Bay

Iwate Prefecture lies north of Miyagi. It faces the Pacific Ocean to the east with sheer, rocky cliffs along its the shoreline interrupted by a few sandy beaches. After Hokkaido, it is Japan’s least-populated prefecture whose small fishing towns dominate its coast.

Things to do in Iwate

The Sanriku Railway runs along the dramatic coast of Iwate, offering breathtaking views from the windows of the retro train cars that operate there. It currently has two lines, a south (minami) and north (kita) portion, as much of the line was damaged by the 2011 Tohoku earthquake and tsunami. A section to finally re-connect the two lines is scheduled to be completed sometime in 2019.

The northern part runs from JR Miyako Station to Kuji Station, and the southern portion from JR Kamaishi Station south to Sakari Station. The northern railway takes around 90 minutes one-way and is the more popular route as on summer weekends and public holidays a Japanese-style carriage with tatami mats serves the line. While on board, try the special edition “sea urchin bento box” and seasonal sweets on offer. Trains depart every hour to every two hours, and the northern track costs ¥1,850 from start to finish.

How to get to Iwate

Take the Tohoku Shinkansen to Morioka Station. It is a direct connection from both Tokyo and Sendai. From here, take either JR Yamada Line or Express Bus 106 to Miyako Station, the starting point of the Sanriku Railway. The train will take you there in 2 hours, while the bus is a tiny bit slower.

Aomori Prefecture is the northernmost point of Honshu, Japan’s main island. Famous for its seafood and as the bridge to Hokkaido, it forms the last stretch of Tohoku’s impressive shoreline.

Hachinohe is a city in southern Aomori, bordering Iwate Prefecture and the second-largest city in Aomori. It is famous for one of Japan’s largest morning markets, great yatai (street food stalls), Tanesashi Beach, and the shrine island of Kabushima where couples pray for eternal love.

Things to do in Hachinohe

Tanesashi Beach is designated as a place of national scenic beauty. It is known for its sandy and rocky beaches. Grassy meadows with shore flowers grow to the beach’s edge and frame breathtaking scenic views. The spot is also famous for its nakisuna (singing sands), as the fine-grained sand will sound while you walk on it. Get off at Tanesashikaigan Station on the Hachinohe Line.

Kabushima Island lays just offshore Hachinohe and is a national natural monument. The island is also known as the “seagull island”, as it is home to some 4,000 black-tailed gulls, called umineko in Japanese. The island is dominated by a Shinto shrine that has an air of Studio Ghibli magic to it. Couples come here to pray for their relationships, as the sea gulls that live here are known to be monogamous for life. Get off at Same Station on the Hachinohe Line.

If you are staying in Hachinohe over the weekend, start your day at the Asaichi morning market. It is held every Sunday at Tatehana Wharf starting at 5 am and often advertised as the largest morning market in Japan. People queue up for a variety of food, including local vegetables and fresh and ready-to-eat seafood, and all at prices more reasonable than in Tokyo. Get off at Mutsu-Minato Station on the Hachinohe Line.

At night, take a stroll through Miroku Yokocho, a small maze of food stalls. It’s a dense system alleys, with around 25 shops, featuring a variety of local and regional cuisines, and very popular among tourists and locals. It’s a short walk from Hon-Hachinohe Station on the Hachinohe Line.

How to get to Hachinohe

Hachinohe is a stop on the Tohoku Shinkansen Line, about 1 hour 20 minutes from Sendai and 2 hours 45 minutes from Tokyo. The town is served by one train line, the Hachinohe Line, which connects to all of the most famous sights.

Located at the southern edge of Fukushima Prefecture, toward Tokyo, is Iwaki Town, which surprisingly has become a sightseeing favorite for travelers from Asia. Why? The port boasts an aquarium, seafood market and mall that are well worth a visit.

Things to do in Iwaki

Aquamarine Fukushima is surprisingly large for its rural location. The aquarium takes you on a tour of the history of the seas, from the age of the dinosaurs till today. The exhibits include tropical Asia as well as an outdoor wave tank of Japanese waters. Open every day from 9 am to 5 pm.

Right next door you find the entertainment complex Iwaki Lalamew which includes a fish market, a seafood barbeque area and a small mall. Here you can see the local fishermen’s catch and grill the seafood yourself right at your table. The mall is perfect for shopping for souvenirs such as regional sake, dried seafood products and local arts and crafts. Most zones of the complex are open from 9 am to 6 pm, while some only open at 10 am and others already shut their doors at 5 pm. Open every day, but check the website for details on the odd holiday and times for the zones you want to visit.

After, many visitors also head to the large Aeon Shopping Mall located right across the road that offers anything from electronics to fashion. The mall is open every day from 10 am to 9 pm.

How to get to Iwaki

All three attractions are located at Onahama Station. You can either stop here on your way back to Tohoku by taking the Shinkansen to Koriyama Station and taking a bus for 2 hours to Shishoiriguchi Station. Or take a two-hour JR Hitachi Tokiwa express train from Ueno Station in Tokyo to Izumi Station. From here, Aeon Mall operates a free shuttle bus service.

Written by: Mareike Dornhege
Mareike's Tokyo favorites are: The Ultimate Hachijojima Itinerary: A Tropical Weekend Just 1 Hour from Tokyo, Hachijojima: Tokyo’s Tropical Getaway, Top Diving Day Trips from Tokyo
Filed under: Things to do
Tags:
Sharing
Questions or comments about this article?
Start a thread on our community forum
Ask our local experts about Tokyo