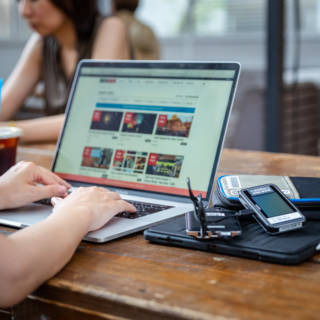 If you’re wondering how best to stay connected while you’re traveling around Japan, a pocket wifi router might be the solution. Often easier to set up than tourist SIM cards, especially useful if you are traveling in a group or have multiple devices (e.g. two phones, a tablet, laptop and so on), and super simple to collect and drop off, these mobile wifi routers are a clever choice. Here, we explain how you can rent a portable wifi router in Japan, as well as what we think the top options are in terms of value, data usage and length of stay.

Renting a pocket wifi router in Japan: How it works

It’s actually fairly simple to rent a pocket wifi router for your trip to Japan. All you need to do is fill out an online application (most providers have English web pages), and the portable router will be ready for collection at the airport when you arrive, or delivered to your accommodation shortly after (or even before) you get there. Both options are often free, but if not, you’re looking at a small levy of between ¥500 and ¥1,100. In most cases, booking two to three days in advance is sufficient.

Once you’ve got the pocket wifi router in your cheapo paws, you just switch it on, connect to it from your devices (you’ll have been given the password) and boom—you have the interwebs at your disposal. Just before you leave Japan, you either return the router in the prepaid envelope provided (just pop it into a postbox), or drop it off at the airport—different providers have different requests.

There are more than 30 companies that provide wifi router rental in Japan, with variations in data allowances, connectivity speeds, coverage, customer service and rental periods. Most of Japan’s pocket wifi routers use 4G or 4G LTE and can be rented for the number of days you’ll need one for, e.g. 3, 7, 14 or 30+ days. You can often combine the router with another device, e.g. a power bank—which is handy if you’re doing a lot of sightseeing.

Our general advice is to get the fastest speed possible and opt for unlimited data (note, though, that many plans have daily data caps after which speeds are temporarily reduced). After all, you’re going to be uploading loads of pics and footage of your fabulous adventures in Japanland to make your friends jealous—and you don’t want to get throttled in these noble endeavors. We may be cheapskates, but we believe in decent internet.

To make the choice easier for you, we’ve compared the different providers (we made a spreadsheet and everything, but we’ll spare you the gory details) and present what we reckon are the top choices below. It’s by no means an exhaustive list, but we hope it’s helpful.

To work out the router plans that have the best value, we looked at pricing for five days, plus speed and data allowances, as well as English-language customer support. We used similar criteria across the categories below.

At the top of our rankings is the Ninja Wifi router, a pocket device that provides download speeds of up to 187.5 Mbps and upload speeds of up to 37.5 Mbps—more than fast enough for doing most things. The router runs on the SoftBank network, using 4G and 4G LTE technology. Data is unlimited (but using over 10GB in one day could see speeds temporarily slow).

Winter promo: If you order a Ninja Wifi router between December 2019 and February 2020, you’ll get a power bank for free. Simply click on “Stand-alone Insurance options” and add a power bank.

The base rental rate for a Ninja Wifi router, with tax, is ¥990 per day, but cheapo readers get a 30% discount, meaning that a five-day rental will cost you just ¥3,465. (Note: The discount is applied automatically when you order through our special link.) You can pick up and drop off your device for free at the airport—both Narita, Haneda and other major Japanese airports are covered. Also, you can get medical insurance and translation devices as an add-on, which is neat.

For travelers who don’t need much data: There is also a 1GB/day plan, which is a bit cheaper. It costs ¥616 per day, working out to ¥1,848 for three days or ¥3,080 for five, without any add-ons. You’ll find the 1GB/day rental option next to the Unlimited Plan on the Ninja Wifi order form.

Same-day order and pick-up: If you are unsure of your travel plans, you can order your router and collect it on the same day. If you use the QR code in the advert above, you will still qualify for the 30% discount, but the cost will be between ¥900–¥1,200, plus tax, per day, and only the Unlimited Plan will be available. This service is offered at Haneda Airport (but not Narita), Kansai International Airport, Chubu Centrair International Airport, Fukuoka Airport, New Chitose Airport, and for Shinjuku pick-ups, too.

Well-known global brand Fon also offer a decent package when it comes to portable wifi hotspots. Their key differentiator is the speeds they advertise: download speeds of up to 758 Mbps on their Speed Wi-Fi NEXT W05 device, with what we are told is unlimited data (though exceeding 10GB three days in a row could see speeds slow).

We cannot confirm the speeds, but even if they’re a quarter of the maximum, you’re more than sorted. Price wise, you’re looking at ¥5,000 for five days, with a shipping fee of ¥1,500, which can be waived if you collect at an airport/other pick-up counter in Tokyo, Fukuoka or Sapporo. There is a slightly slower, slightly cheaper router available too. What’s cool about the Fon folks is that you get a power bank with your order, and you can rent a second router for half the price—handy for pairs and groups.

Another contender—thanks to its speeds—is CD Japan, where you can get, among other options, a CloudAir pocket wifi router that gives you download speeds of up to 150Mbps and upload speeds of up to 50Mbps. Data is unlimited, but should you use more than 150GB in a month, speeds will be reduced for a period. Rates start at ¥3,650 for five days (the minimum rental period), going up to ¥11,100 for 30. Thereafter, rates drop. Note that insurance, as with most other rental wifi routers in Japan, is extra, and there is a delivery fee of ¥540.

In this category, we looked at which companies offer the most gigabytes for your buck.

If you’re planning to burn through a ton of data, you might consider a router from Japan Wireless. Their Business Wifi plan gives you download speeds of up to 95Mbps and unlimited data on the SoftBank network. Rates start at ¥2,728 for two days and climb to ¥14,047 for a month-long rental. There is also a Premium Wifi option that has download speeds of up to 187 Mbps, but is a few hundred yen more. Delivery is ¥550 and you get an extra mobile battery for free. It’s perhaps worth noting that one of our Cheapo team members wasn’t very happy with the service they received when renting through Japan Wireless. Many other people seem to have a better experience, though.

Another good option for heavy data users is actually the previously mentioned Ninja Wifi. Although their website states that there is a “fair usage” policy for high data use, in practice this is not really enforced (sssshhh, Cheapo secret!).

Here, we considered the needs of travelers coming to Japan for upwards of 30 days.

If you’re going to be in Japan for more than a month, the High Speed Wifi router from Japan Mobile and Wifi Router Rentals is probably one of the most affordable options. Running on WiMAX 2 and various networks, these routers come with unlimited data and download speeds of up to 110Mbps. However, if you use 10GB+ in a month, you get throttled to 200kbps, so consider your data needs before committing. Rental for 30 days is about ¥9,700, with a delivery fee of ¥1,100.

The SoftBank Pocket WiFi 501HW from Kyushu Wifi Rental (despite the name, they operate countrywide) is another viable option, giving you 100 GB of data on the SoftBank LTE network at download speeds of up to 187.5Mbps and uploads of up to 37.5Mbps. Basic fees are capped at ¥7,920 for a month. Round-trip postage costs ¥1,100. If you rent for 4-6 months, rates drop. The website, however, does require some Japanese-language skills.

For this category, we looked at plans that are good value for stays of just a few days.

If you’re making a super short trip, the Ninja Wifi router is a great choice—you’re looking at ¥2,079 for three days, thanks to our specially negotiated cheapo discount.

Getting one of the Kyushu Wifi Rental routers might be another economical option. Their SoftBank Pocket WiFi 501HW costs about ¥520 per day (but don’t forget to add in the postage fees of ¥1,100). There are also slower and capped packages, which could work out a bit cheaper.

Note: This is a round-up of the router rentals mentioned in the article; a number of different wifi packages are available through each provider, with different prices, speeds and conditions. Prices tend to decrease with the length of the trip; longer rentals generally get better rates.

Do I need wifi router insurance in Japan?

Insurance is optional when you rent a wifi router in Japan, but be sensible and go for at least a basic plan—it will set you back maybe ¥500–¥3,000 in total, but will save you potentially zillions in stress reduction. The last thing you want is a router return nightmare just before you board your flight!

Is free wifi available in Japan?

The short answer? Um, yes—sort of. While there are an increasing number of free wifi hotspots in Japan, there are still (we think, anyway) nowhere near as many as there should be, and sometimes connecting can be tricky. It’s not advisable to rely exclusively on free wifi while traveling around Tokyo and the rest of the country—unless you’re cool with an enforced digital detox. Read more about connecting to the internet in Japan.

While we do our best to ensure the information here is correct, it is subject to change. Note that exceeding data limits could, in addition to seeing speeds slow, result in a temporary suspension of service. Check all prices and terms and conditions carefully with the provider before ordering your pocket wifi router. Post regularly updated. Last update: November 14, 2019.