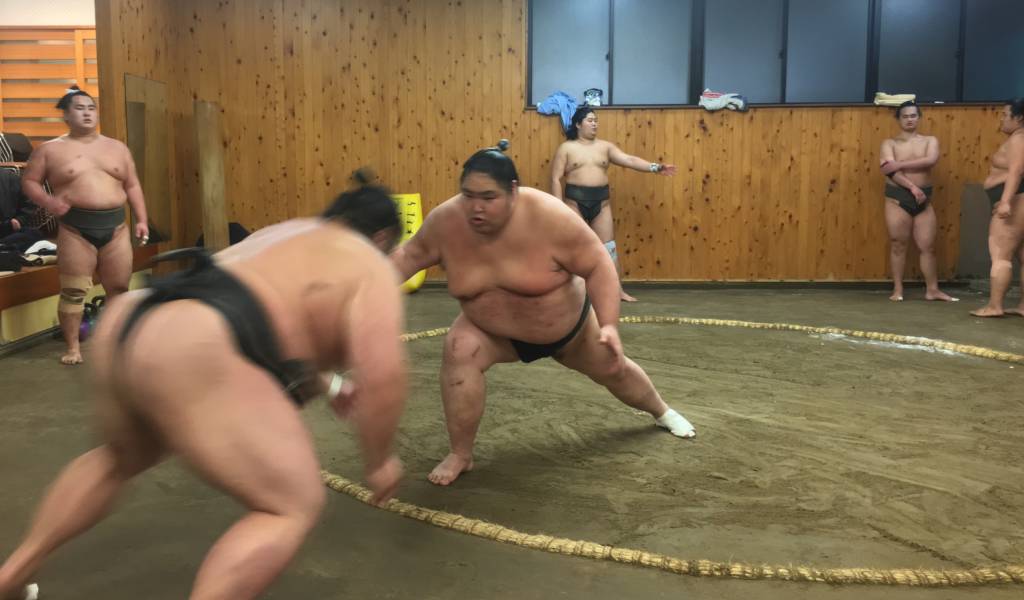 How to Get the Morning Sumo Practice Experience

Grand sumo tournaments are held six times a year, and three of those tournaments take place in Tokyo. Maybe you planned your visit around one of these tournaments…or maybe you didn’t. Fortunately, there are still a few ways you can see sumo wrestlers in action — like visiting a morning sumo practice session at one of Tokyo’s “sumo stables” (the facilities where wrestlers live and train).

Update: Arashio-beya (the free option) may be restricting access due to the pandemic. Please check their website for further details.

When does sumo training take place?

Practice starts early. Not quite tuna auction-early. But still pretty early, like 7 or 8 a.m. And this is important: training doesn’t take place when tournaments are on (including the three tournaments held outside Tokyo). It is also often suspended for a week or so after the tournaments, and on other random days when the wrestlers have some kind of engagement.

For the true Cheapos out there (who don’t mind potentially being left out in the rain, literally), there’s Arashio-beya, the sumo stable that lets you watch practice for free — from outside. The outside wall of the beya (that’s Japanese for sumo stable) has large, street-facing windows. There is a bicycle rack in front of the window, and you’re not allowed to step in between the bikes, so the experience will be at arm’s length. But otherwise it’s a pretty decent view, so long as not too many people are gathered. If you’re lucky, the rikishi (sumo wrestlers) will step outside after the session and may be willing to pose for photos with you. However, there’s no guarantee.

How to watch practice at Arashio-beya

Practice at Arashio-beya takes place between 7:30 a.m. and 10 a.m. on most mornings outside of tournament periods. Still, it is best to call the sumo stable between 4 p.m. and 8 p.m. the day before to make sure the practice is actually taking place — and to ask for exact starting and ending times. For non-Japanese speakers, the stable’s website has a dialogue in romaji (romanized Japanese) to help you through the conversation. Rest days and changes to the timetable are often announced on the website, too.

Arashio-beya doesn’t require reservations to watch through the windows, but the courtesies expected in return for the privilege of watching sumo practice are outlined on the website. For example, no flash photography is allowed.

The closest subway station is Hamachō on the Toei Shinjuku line; use exit A2. You can also walk there in 10 minutes from exit A1 of Ningyochō Station, which is on the Hibiya line and just a few stops from the old Tsukiji Fish Market.

To get a closer look, tour operators take you inside a sumo stable to watch morning practice. You can reserve a spot on a guided sumo stable tour through booking sites like Klook and Magical Trip.

Considering booking but wondering what it’s really like? You can read about what to expect on a morning sumo stable visit, as we sent a writer to experience it for herself.

Keen to explore other types of throwdowns? You might find our guide to Japanese Pro Wrestling interesting.

When you arrive at the stable, it’s polite to bow to the stable’s usher and anyone you encounter on your way in. You can also say “o-jama shimasu” — which roughly means “I am sorry to disturb you” — in a soft voice after you have taken off your shoes and stepped up from the genkan (entrance). When you enter the room where the training takes place, also bow toward the rikishi without uttering any words and silently make your way over to the cushions laid out for you to sit on.

You don’t need to sit in seiza (formal kneeling position), but make sure the soles of your feet never point towards the fighters or the dohyō. You can’t eat, drink, or talk during the training, so as not to disturb the wrestlers’ concentration. If you turn up late, you might not be admitted, so make sure to be on time. Also, you can’t leave early.

While this may sound like a lot of rules to follow, it’s still a far cry from the highly regulated lifestyle that the rikishi follow for the duration of their careers, which dictates everything from training to eating and sleeping times.

Before you leave, some of the fighters will probably be happy to pose for a picture with you. Remember: don’t touch them without asking if it’s okay, and be sure to smile and say “arigatou gozaimashita” while bowing slightly before you leave.

While we do our best to ensure it’s correct, information is subject to change. This article was originally published in September 2014. Last update: January 2023.