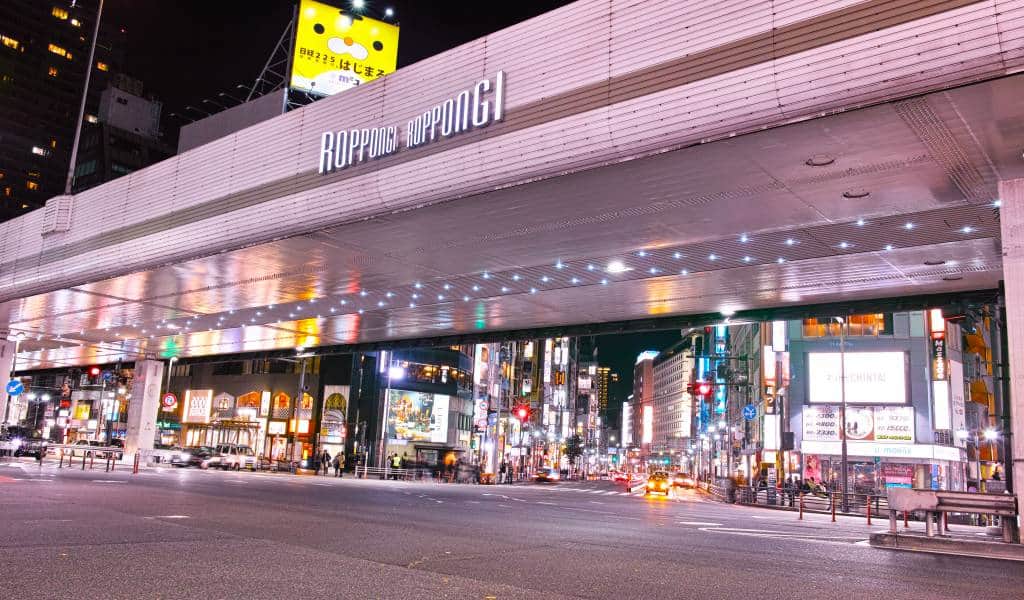 Roppongi is simultaneously one of the most loved and hated neighborhoods in Tokyo. While home to the Japanese head offices of foreign companies like Google, Credit Suisse and Goldman Sachs and some of the best restaurants around, it also has a seedy reputation with a profusion of hostess bars, strip clubs and nightclubs. We still recommend a visit though, the sheer volume of entertainment and eating establishments means there are plenty of cheapo options.

Common Cafe and Music Bar Lounge opened this year and is already proving very popular. Located on the first floor of a co-working space by the name of Kant, Common has delicious food and drinks, as well as DJs Thursday – Saturday every week. The open and relaxed space makes it a great place to stop in after a long day at the office and unwind.

Roppongi is a neighborhood in Minato Ward in central Tokyo. In fact, it’s so centrally located that it has quite good connections to a good number of Tokyo’s main attractions, with Asakua’s Sensoji Temple only 35 minutes away in one direction and Harajuku’s Takeshita Street only 17 minutes in the other direction.

During the day, the streets of Roppongi feel very much like a modern, multicultural metropolis. Walking through the streets you’ll encounter a healthy mixture of business people and shoppers going about their business. There’s also a steady stream of traffic on the roads crisscrossing the neighborhood so it’s not always the most pedestrian friendly place. You can walk between attractions easily enough, but pedestrian crossings are quite spaced out compared to other areas of Tokyo so if you cross too late you might find yourself having to backtrack.

At night, things get seedier as the nightclubs and bars throw open their doors. It can get pretty crowded, especially on weekends and it’s definitely rowdy. But hey, Roppongi is one of the most popular nightlife districts in Tokyo so expect nothing less.

Roppongi is generally quite a safe area. It is crowded and well-lit at night, with good public transport options. That being said, because of its nature as a nightlife district we do advise you exercise all the usual precautions if you go out, especially if you’re alone.

Roppongi is well known for its international atmosphere. Due to the high number of international companies and foreign embassies in the area, it has a high population of foreigners living there. This means it’s possibly the best place in Tokyo to find international cuisine, along with a number of imported goods shops.

It’s also a popular destination for the shopping. Hit up Roppongi Hills or Tokyo Midtown shopping malls for some (mainly upscale) shopping. The various museums and art galleries are also a major daytime attraction.

And of course, when the sun goes down, Roppongi becomes party central. Bars and clubs open their doors for foreigners and Japanese people alike to come and enjoy.

What to see and do in Roppongi

Visitors to Roppongi have their fair share of things to do, including shopping, movie-watching, checking out art, and a whole lot more.

One of the area’s biggest claim to fame is the Roppongi Art Triangle: The National Art Center Tokyo, the Suntory Museum at Tokyo Midtown and Mori Art Museum at Roppongi Hills are all located within easy walking distance.

While in the Roppongi Hills area, you can take in a movie at TOHO cinema (some of the screens are MX4D), catch a view from the Mori Museum Observatory, or visit some of the lesser known art galleries, like Hiromiyoshii and Gallery Side 2, both of which appear on our Top 10 Free Things to Do in Roppongi list.

Tokyo Midtown is home to tons of shops and restaurants, as well as several art museums—including the (free) Fujifilm Square, which features photographic and hands-on exhibitions.

And once the sun has dipped for the day, Roppongi becomes party central. See our guide to clubbing on the cheap.

Where to eat and drink in Roppongi

If your belly is jonesing for some international chow, you’re in the right location. Roppongi has a vast selection of international food to indulge in, with restaurants and cafes ranging wildly in price, quality and authenticity.

We recommend Asian Kebab, earning a place in our hearts with its delicious taste and relatively cheap price. Just take Exit 5 from Roppongi Station and walk along Gaien Higashi Street — look for the vertical rotating spit outside the restaurant. Or if you’re just looking to fill your belly, stop by Pizzania where you can get a pie for only 500 yen.

Nightlife and entertainment in Roppongi

If we were to name each and every bar or club in the Roppongi area we’d run out of space very quickly. To get your night started though, consider one of these Cheapo friendly bars, three on this list can be found in Roppongi. Two Dogs Taproom also gets a shout out for being especially foreigner friendly with a great mix of foreign and Japanese clientele.

Once you’ve warmed up head over to V2 for great beats and a stunning night-time view over Roppongi. Alternatively, you could go for a pub crawl instead and take the pressure off yourself to choose somewhere.

Where to stay in Roppongi

In Roppongi, accommodation options range from capsule hotels to the Ritz-Carlton (but it’s forbidden to stay there by Cheapo Law). One interesting point to note is that Airbnb rentals in the Roppongi area are not very cheap, with prices sometimes listed higher than a regular hotel room.

How to get to and from Roppongi

How to get to and from Roppongi
There are two main stations in the Roppongi area. Roppongi Station is a stop on both the Tokyo Metro Hibiya Line and the Toei Oedo Line, with the Oedo Line in particular offering good connections to the rest of central Tokyo thanks to its loop route.

Roppongi-Itchome Station is a short walk from the main drag, but gives access via the Namboku Line.

All Articles about Roppongi

Things To Do in Roppongi

Getting Around in Roppongi