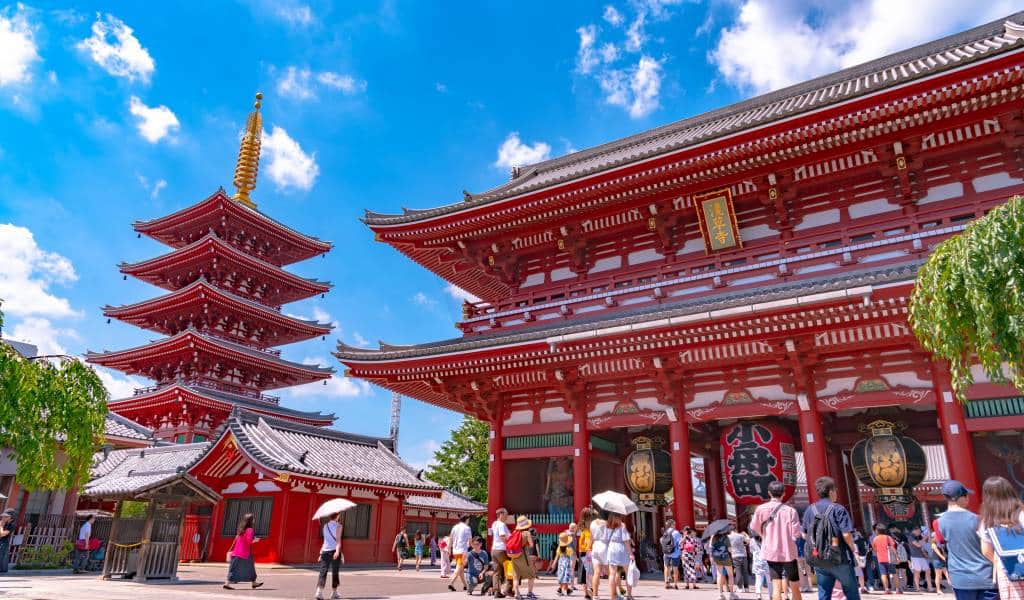 Sensoji: The Ins and Outs of Tokyo’s Oldest Temple

In a city full of temples, Sensoji is the oldest, boasting almost one and a half millennia of history. It features Tokyo’s biggest souvenir market, as well as perhaps the gaudiest rendezvous point—its Kaminarimon Gate with the huge red chochin lantern. Sensoji Temple in Asakusa is just a 15-minute train ride from Tokyo Station (20 from Shinjuku, 30 from Shibuya or just 5 from Akihabara)—here’s what to know and how to explore the place.

Sensoji Temple: It all started in the river

Sensoji Temple was the reason the insignificant village of Asakusa became a town. Ieyasu, the Tokugawa shogun who created the great city of Edo and made it Japan’s de facto capital in the early 1600s, saw in Sensoji a very convenient symbolism. Being the toughest warlord of his time, he needed all the help he could get from the gods and Buddhas. According to ancient geomancy, potential invaders come either from the northeast or the southwest, the front and rear “demon gates”. Sensoji Temple was the guardian of the northeast gate and Zojoji Temple in Shiba, near Tokyo Tower took care of the southwest; Ieyasu made them both his family temples.

When this happened, Sensoji Temple was already 1,000 years old. Its chronicles put its founding at 628 AD through one of these stories that legends and religions are made of: While fishing in the Sumida River on the morning of March 18, the brothers Hinokuma Hamanari and Takenari caught in their nets a small golden statue of the Buddhist deity Kannon. They tried to get rid of it, but it kept coming up so they decided to keep it. When they returned to the village, they showed it to one of the chieftains Haji no Nakatomo who being a devout Buddhist understood what it was and built a temple to house it. The temple was, of course, Sensoji. “Senso” is another reading of the characters for “Asakusa” and “ji” is “temple”.

The miraculous statue became a local legend and soon pilgrims from all over Japan started flocking in; some of them being distinguished Buddhist leaders and advertising their visits to their followers didn’t hurt either. The only thing missing was the support of the samurai and this came later during the 10th and 11th centuries when noble warlords from the powerful Taira and Minamoto families came to visit and help build/rebuild various parts of the temple complex. One of them, Taira no Kinmasa is responsible for both the Kaminarimon Gate and the second largest gate the Hozomon.

Sensoji Temple (and Asakusa—their stories always go together) really boomed during the Edo period, first when Ieyasu made it his family temple and even more so when he “decommissioned” it in 1625. With its status as “shogun’s temple” gone, the townspeople of the new city felt closer to it. When the authorities decided to move to its vicinity Edo’s already famous red-light district, Yoshiwara (this happened in 1657 because a fire had destroyed the original Yoshiwara near Nihonbashi), the crowds multiplied. Consequently, Asakusa became the city’s hub and Sensoji Temple became even bigger and wealthier. It was then that the temple as we know it today was first built, by Ieyasu’s grandson, Iemitsu, the third Tokugawa shogun.

Standing at the gate of Sensoji Temple

There are many ways to visit Sensoji and appreciate the temple and its surrounds, but the standard is to start from the Kaminarimon Gate and move up. The two statues guarding it are of the two rather obscure deities Fujin-sama and Raijin-sama, “god of wind” and “god of thunder and lightning” respectively. The latter (i.e. the left one) has given his name to the gate since another reading of “rai” is “kaminari”. Incidentally, this is what the characters on the big red lantern say: “Kaminarimon” or “thundergate”. When passing through the gate, check under the base of the lantern—you’ll find a dragon hiding there! This is because the official name of Sensoji Temple is “Kinryuzan” or “Golden Dragon Mountain”; the same thing is written on the green plate above the lantern.

The street lined with shops (mostly souvenir but also regular shops, some of them over 100 years old) is Nakamise Dori, meaning “inside street”, i.e. inside the temple grounds. They might seem like a recent invention to help relieve you of your tourist dollars, but actually the Nakamise goes way back: you can find it in pilgrim guides from the times of Edo. Apparently, 18th-century Edoites were as entrepreneurial as 21st-century Tokyoites and 18th century pilgrims were as consumeristic as we are today! You can buy your souvenirs here—pretty much everyone does—but (a) there are some better alternatives and (b) let’s see Sensoji first, OK?

Somewhere in the middle of Nakamise you’ll see on your left a yard filled with “no photographs allowed” signs—reason being there is a kindergarten there that belongs to Denpoin Temple (which is part of Sensoji and residency of its abbot). Denpoin is almost always closed but if you happen to be here in the spring, check for the possibility it is open to visitors: once a year there is an exhibition of artworks from Sensoji’s collection in one of Denpoin’s buildings and by visiting this you also get to see its garden (it’s beautiful!).

At the second gate of Sensoji Temple

After you’ve passed Denpoin, you have almost reached the real thing: the Hozomon, Sensoji Temple’s actual main gate (originally from the early 10th century like the Kaminarimon, but of course rebuilt) and to the left the Goju no To five-storied pagoda (there are very few of them in Tokyo so take lots of pictures!) The pagoda, also from the 10th century is always closed to visitors because, well, it’s a graveyard. It contains memorial tablets of thousands of families and individuals, so you can only see its insides if you can prove that you have family there, so to speak, and even then only during very specific times of the year.

Next to the pagoda is the Hozomon with its two Nio statues/protectors. The story goes that the models for them were 1960s sumo wrestlers Kitanoumi (on the left) and Myobudani Kiyoshi (on the right). The sculptor who made the right statue comes from a city called Murayama in Yamagata Prefecture. To honor him and the fact that Sensoji was kind enough to offer him the opportunity to showcase his work (in such a grandiose way!), 800 citizens of Maruyama get together every few years and create a pair of enormous waraji straw sandals—you will see them at the back side of the gate but don’t get too close: they weigh about 2.5 tons each!

Having passed the Hozomon Gate, you’ve reached Sensoji proper, the main temple (Hondo or Kannon-do) still houses the statue of Kannon the fishermen found 1400 years ago (or so they say: the statue was allegedly so radiant that they buried it in the ground inside Sensoji Temple and no one has actually seen it since). The shops at both sides of the last stretch sell the official Sensoji merchandise: omamori amulets, scrolls, incense to burn at the huge burner in front of the temple’s stairs, books about the temple, (in Japanese) and omikuji fortunes. If you aren’t set on some particular souvenir, something from there will be cheaper and more worthy as a conversation piece. Personally I’d go for the goshuin calligraphy with the temple’s red stamp and the date of your visit: it goes for ¥500 and it’s written just for you by the temple’s priests.

Sensoji: The thing itself

Hondo’s (the main temple) visiting hours are 06:00-17:00 and it’s really worth going up the stairs and wandering around. If you do, don’t neglect to look up: some of the greatest artworks from Sensoji’s collection are painted directly on the ceiling or are hanging on the upper part of the walls. The room where the services take place is also open and you can watch, but usually you aren’t allowed inside. If you want to try though, the entrance is on the right side and there’s always a guard to provide you with information.

Leaving Hondo there are two ways to go: If you go right, there’s Asakusa Jinja, the Shinto shrine were the three men responsible for the founding of Sensoji are venerated. (Remember the two fishermen and their village elder? They are the ones, hence Asakusa Jinja’s crest is three nets symbolizing the ones they used to catch the statue.) Here, by the way you have Japan’s unique mix of religions: the statue is worshipped in Sensoji and the people who found it are enshrined in the Jinja and the two aren’t related—they don’t even belong to the same faith!

If you go left, you come to what is left of Sensoji’s once huge compound. Most of it has disappeared but there are still a few halls like the Yogodo with a beautiful little garden featuring Tokyo’s oldest stone bridge (made in 1618), the Yakushido and the Awashimado, all built in the Edo period to house various Buddhist saints and to help various highbrows, (shoguns included) atone for their sins.

Don’t leave Sensoji Temple without exploring the left side though. Besides Asakusa Jinja, there’s also Bentendo on a small hill with a huge bell, one of Edo’s six-hour bells (now it’s only stricken once at 06:00) and the garden with the statues—the most impressive are two “Buddhas” (well, Boddhisatvas, sort of like saints), from 1687. The one on the left is Seishi and the one on the right, Kannon; yes the same Kannon that Sensoji is dedicated to (so even if you don’t get to see the actual statue, you get to see how Kannon supposedly looks like). Also before entering Nakamise Dori again, check the ablution fountain with the wonderfully detailed dragon king bronze statue. Why not rub some of the smoke from the huge incense burner to any part of your body that might ache? It’s supposed to make it feel better. I won’t comment on the fact that most Japanese rub it on their heads!

So there you have it: the basics of Sensoji, Tokyo’s oldest temple and the reason Asakusa exists. It looks like a tourist trap but it’s still the heart of a very lively community that has been living with visitors for over 500 years. The locals are generally friendly (sometimes they do get fed up with thousands of people photographing them every day) and they’ll happily offer information about the temple and its facilities if you ask. There are also hundreds of shops, restaurants and cafés around to satisfy almost any need and the best way to get its feel, i.e. by wandering around and watching people, is free! Even if other aspects of Tokyo are more to your taste, it would be a shame to miss it.

All that exploration ot you hungry? Try these sweet treats found in Asakusa.

This post was originally published in April, 2015. Last updated in October, 2018.