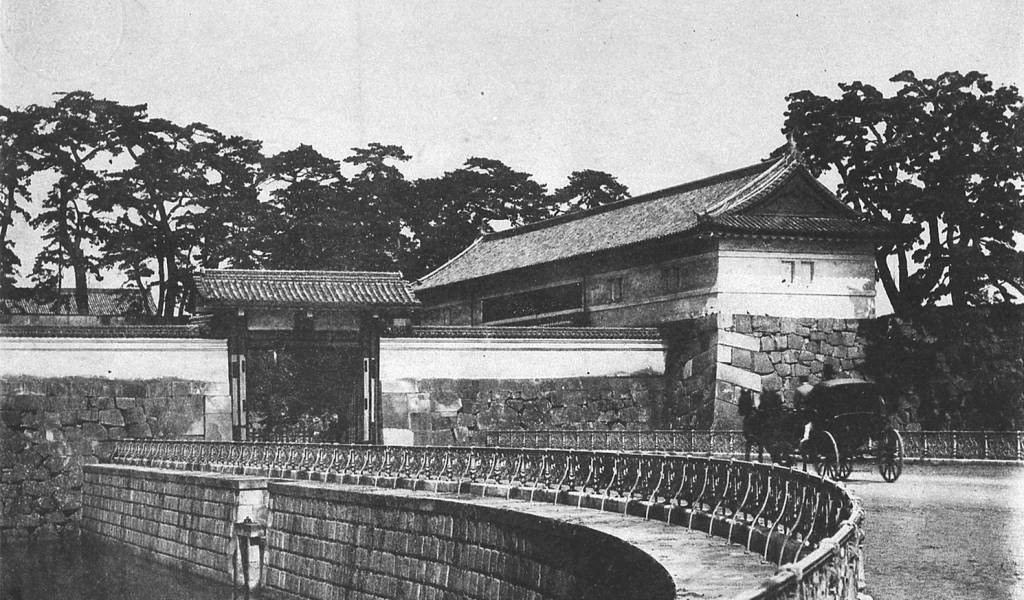 Why This Isn't Kyoto Cheapo (Or, a Free History of Edo, Part 1)

Ever wondered what Tokyo was like back in the day? You know, like waaaayyy back in the day? Here’s the first installment in a special two-part series on Tokyo history—looking at how the capital came to be the crazy city it is today.

Sixteenth-century Japan wasn’t a place for weaklings. The land of haiku, tea ceremonies and elegant avenues of cherry trees spent much of the early 1600s soaked in blood, backstabbing and battle as rival daimyō (great lords) battled for dominance. The Imperial Court was in Kyoto, the Ashikaga Shoguns held sway, and the unified Japan of today was everyone’s goal but nobody’s reality. The tumultuous Sengoku Period began with the Ōnin War in 1467 and ended only when Tokugawa Ieyasu became the first Tokugawa Shogun in 1603.

Tokyo history 101: Toyotomi Hideyoshi and the making of Edo

Before Tokugawa Ieyasu, the prime A1 hard man of Japan was Toyotomi Hideyoshi. Starting as a general in the army of the daimyō Oda Nobunaga, Hideyoshi took over Nobunaga’s daimyō coalition after the latter’s murder in 1582. Having secured control of central Japan this way, he set about climbing right to the top of the greasy pole, conquering the island of Shikoku in 1585, invading Kyushu with 280,000 troops in 1586, and overthrowing the Hōjō clan of the Kanto region and the Date clan of Sendai by 1590.

The northern daimyō saw the southerner pushing north and, understandably wishing to avoid destruction, knuckled under. Control of unified Japan was not enough for Hideyoshi, though. He had foreign ambitions. He finally hit the wall with unsuccessful attempts to invade China, via Korea, in 1592 and again in 1597.

Hideyoshi never took the title of Shogun, but had the tacit approval of the Emperor Michihito and the Imperial Court. He started construction of a great castle at Osaka in 1583, on the site of Ishiyama Hongan-ji Temple, which had been captured by Oda Nobunaga in 1580 and mysteriously burned down soon after.

In the new Osaka Castle, Hideyoshi kept the wives and heirs of his vassal daimyō on the sound grounds that nobody would kick up while he had their wife and children under his thumb. He also liked to move vassal daimyō away from their original lands and place them in new locations, where the local population wouldn’t necessarily want to co-operate with them. Machiavelli and Hideyoshi would have had a lot to talk about.

And this, in a roundabout way, is how Edo—what we know as Tokyo today—got its start. Tokugawa Ieyasu, a young vassal daimyō from the Mikawa region, was moved to Edo in the Kanto region, which Hideyoshi had recently confiscated from the Hōjō clan. Edo itself was only small town, but the domain attached to it was enormous, and richer than the one Hideyoshi himself directly controlled.

The rise of the Tokugawa shogunate

Giving the young, brilliant Tokugawa Ieyasu control of this prime real estate might have been a mistake as far as starting a Toyotomi dynasty was concerned. When Hideyoshi died in 1598, shortly after the second unsuccessful attempt to invade China, the council of ruling elders that he left behind couldn’t rein in the young Ieyasu’s ambitions.

Hideyoshi’s heir, Hideyori, was only a baby when his father died, and Ieyasu was the most powerful of the five daimyō appointed as regents. He soon became very much the top dog. Some daimyō of western Japan tried to resist this, but they were crushed at the Battle of Sekigahara in 1600, and in 1603, the Emperor Kazuhito declared Tokugawa Ieyasu Shogun.

The odds were not in young Hideyori’s favor. The Shogun declared war against him in 1614, starting the Siege of Osaka, and although he didn’t defeat the young Hideyori outright, it was pretty much the end of the Toyotomi as a major force in Japanese politics. After an attempt to fend off a second assault by the Tokugawa forces failed in winter 1615, Hideyori committed seppuku. Probably. Nobody, it seems, is entirely sure.

But the Tokugawa boat had sailed. Edo, their headquarters, was the center of political power in Japan. Kyoto still functioned as the country’s formal capital, but everything was happening in the vibrant, up-and-coming eastern capital. Tokugawa Ieyasu had abdicated the title of Shogun in favor of his son Hidetada in 1605. This made for a smoother takeover for Hidetada, and having two—and later three—living Tokugawa rulers made it difficult for anyone to topple the new dynasty.

Ieyasu remained the de facto ruler of Japan until his death in 1616. Hidetada abdicated in favor of his own son Iemitsu in 1613.  Iemitsu ruled as Shogun until 1651, by which time the Tokugawa Shogunate was properly entrenched and nearly unassailable.

The Tokugawa Shogunate was different from its predecessors in several significant ways, but the one that made all the difference to Edo was their source of income: agricultural taxes. Previous shogunates had relied on commerce and, to some degree, international trade. The early Tokugawa shoguns wanted none of that: wide-scale trading outside Japan, as far as they were concerned, brought nothing but trouble.

Nobody out, almost nobody in: Sakoku and the growth of Edo Japan

Europeans had arrived in Japan as early as 1543, when a Portuguese ship docked at Tanegashima. They brought what Europeans usually brought to new places: guns, gadgets and religion. Guns, the Japanese liked; in fact, the introduction of firearms into Japanese warfare kicked the development of castles in Japan into high gear.

Daimyō responded to new artillery and arquebuses by abandoning the old systems of isolated small castles and stockades, and investing in castles surrounded by heavily fortified moats and bastions instead. Eager not to get shot either, merchants and retainers settled inside the moats. The result: castle towns like Edo, Osaka and Kyoto. Whoever had guns—like the Tokugawa family—had the upper hand.

The Japanese also liked gadgets—who doesn’t?—and for a while, fashionable Japanese families favored foreign novelties like spectacles, clocks and bread. So far, so good: in the early days, trade with the exotic West was a groovy thing.

What caused the problem was Christianity. Tokugawa Ieyasu was, at first, fine with international trade, and if he had to put up with a small number of Jesuits and other missionaries along with it, so be it. The Spanish Franciscans set up a small mission in Edo in 1609, around the same time as Dutch and English traders were establishing posts on the island of Hirado, off Kyushu.

But there was a problem: Christians were supposed to be loyal only to God and the Pope—and the Pope was an alien figure. The Tokugawa shogunate decided they could do without the risk of split loyalties among their subjects, and in 1612 Tokugawa Hidetada banned all missionary activities and forced all inhabitants of the Shogun’s domain to renounce Christianity. This caused problems for European traders, who already felt that trade with Japan was too tightly regulated.

In 1623, the English traders quit Japan after deciding the output was not worth the income. In 1624, Spain was kicked out for assisting underground missionaries. Foreign trade meant foreign influence, and it was not to be trusted. In 1635, Tokugawa Iemitsu decreed that no Japanese were allowed to travel abroad. Those already abroad were forbidden to come home. The size of new ships was capped, which basically restricted all seagoing vessels to coastal routes. In 1639, Japan expelled the Portuguese (also for undercover Christian proselytizing) and in 1641 removed the Dutch trading post from Hirado to Dejima, a small island in Nagasaki Bay.

Sakoku, the isolationist foreign policy that resulted from this “nobody in, nobody out” practice, cut Japan off from all but a small amount of tightly-regulated trade with China and Korea. Technological, political and social change in Japan declined. Cultural creativity flowered.

Edo became the seat of governmental and political power: while the Imperial Court stayed safely over west in the historical capital of Kyoto, the Shogun gathered the great, the good and the useful over to his headquarters on the east coast. Tokugawa Ieyasu carried on Hideyoshi’s practice of sankin-kōtai, requiring his daimyō to spend alternate years in Edo and in their domain. Everyone—the daimyō, Ieyasu’s samurai, their wives, children and servants—came to Edo to attend at the court of the Shogun.

The expense of maintaining not one, not two, but three homes (their primary home in the city, their summer home outside the city, and another house for heirs and spares) in the Tokugawa capital as well as estates back home kept the daimyō from becoming too powerful. It also fueled major commercial, mercantile and physical growth in Edo.

Supplying the daimyō and samurai households with everything they needed meant that Edo artisans and merchants made money hand over fist. More money meant more luxury goods, more recreational facilities, and the growth of a flourishing urban middle- and upper-class. Temples, shrines, bridges, parks and gardens were established.

Today, Tokyo snugly fills 850 square miles, and its population is somewhere in the region of 10 million souls—most of them, it often seems, trying to catch a train at Shinjuku Station. Not bad for an old fishing village.

Head over to Why This Isn’t Kyoto Cheapo (Or, a Free History of Edo, Part 2) to read the rest of our guide to Tokyo history.

Written by: Kylie Van Zyl
Filed under: Editorial
Tags:
Sharing
Questions or comments about this article?
Start a thread on our community forum
Ask our local experts about Tokyo