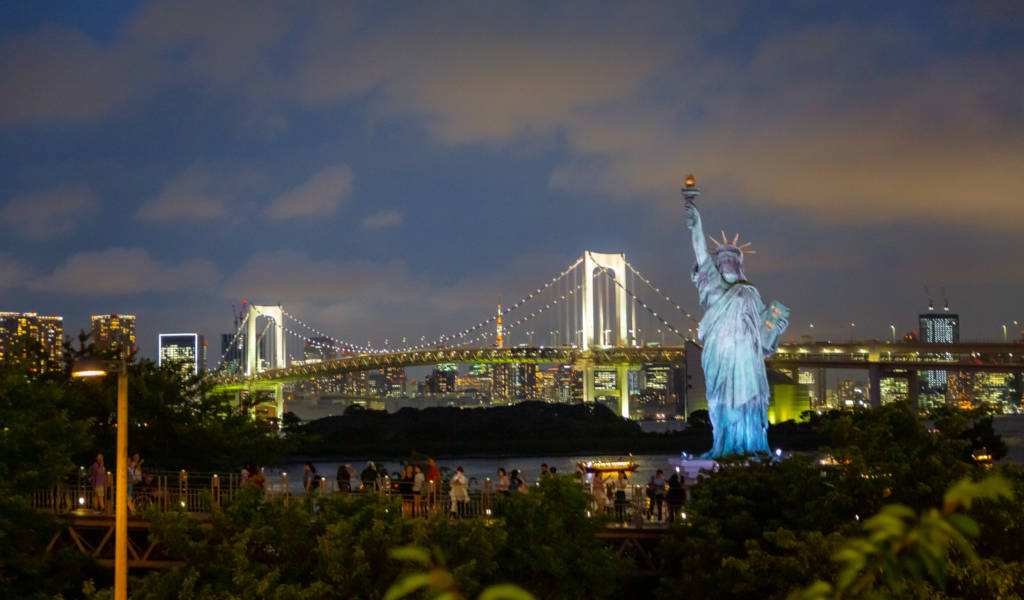 Odaiba is equally fun and, well, strange. The artificial island has gone from defensive fortress to seaport, to what is now a futuristic-looking entertainment/residential area. You have great only-in-Japan things like the life-sized Unicorn Gundam statue just down the road from a somewhat tacky mini Statue of Liberty. It’s also home to Tokyo’s only urban beach (just don’t swim there after it’s been raining!).

This year saw the opening of a new branch of Don Quijote, called Kirakira Donki in the Diver City mall. Don’t be fooled though, it’s much smaller than a regular Don Quijote! This single story shop specializes in items that are popular on social media like cosmetics and candy. Expect lines out the door if you go on a weekend, these products are really popular.

Unfortunately there have also been a number of closures in Odaiba, most notable of which is Palette Town home to teamLab Borderless, the Daikanransha Ferris wheel and Venus Fort shopping mall. The complex is undergoing redevelopment so we can look forward to some exciting new developments in the future.

Another notable closure is Odaiba Odeo Onsen Monogatari, which closed its doors for the last time in September 2021.

Odaiba is located in the southern part of central Tokyo and is part of Koto Ward. The island is linked to the rest of Tokyo via the Rainbow Bridge, a key landmark in the area. If you take the Yurikamome line that starts at Shimbashi Station to get to Odaiba, you can get a great view of the Tokyo skyline as you go over it.

You aren’t going to find famous shrines or old traditional buildings in Odaiba, despite the fact that it was built in the late 1800s. Instead you’ll find a heady mix of pop culture references, entertainment venues, and shop-til-you-drop malls. It’s particularly popular with families and young people, making it a particularly versatile place.

Surprisingly, the nature around Odaiba is quite nice too. There is plenty of greenery around the island and some nice views of Tokyo Bay to be had at Odaiba Marine Park. It’s actually a surprisingly pleasant area to just go for a walk and enjoy some nature in the city.

What is Odaiba known for?

In short, shopping and entertainment. The three big shopping malls, Aqua City, Decks and Diver City pull in shoppers from all over Tokyo on the weekends. Each of these malls have their own entertainment options too, catering for people of all ages. There are also a number of events, concerts and festivals throughout the year.

Odaiba also has quite a few well known landmarks, including the Statue of Liberty, Rainbow Bridger and Unicorn Gundam. The first two are especially popular icons for the area, and are featured on lots of Odaiba souvenirs.

What to see and do in Odaiba?

Odaiba is a place that was designed to keep you there, meaning that there is always something to do. Check out our list of top things to do in Odaiba to get you started.

The three big malls draw in big crowds on the weekends, with cues snaking out of the most popular shops. Each mall is filled with a variety of shops, ranging from brand name clothing to licensed goods. They all also have their own entertainment options too, including cinemas, game centers and one even has a haunted house!

Odaiba is also a popular venue for festivals and concerts, in fact in summer it seems like there’s something happening every weekend. Festivals are not traditional Japanese festivals, again tradition isn’t much of a thing on Odaiba, instead festivals tend to be themed events like Oktoberfest, Niku Fes or Design Festa. Alternatively, there are pop culture festivals like Tokyo Idol Festival and Comiket. There are also regular concerts held at Zepp Diver City.

Pro tip: Despite its close proximity to the water Odaiba doesn’t always get refreshing sea breezes. That means if you’re going to a festival or lining up for a concert in summer things can get very hot very quickly. Check out our tips for keeping cool in the Tokyo summer to help avoid a nasty heat stroke.

Finally, if you come to Odaiba it’s worth setting aside some time to visit one of the many museums. You could choose a classic like Miraikan or the Museum of Maritime Science, or go for something a bit more out-of-the-ordinary like say, the unnervingly cute Unko Museum (Unko means poop in Japanese. Yes, it is a cute poop museum).

Is Odaiba a good place to stay?

Like we said before, the area’s more about entertainment and very family-oriented. Plus, it’s a bit distant from the rest of Tokyo’s sightseeing highlights. That’s why we think it’s better to stay elsewhere in the city. To see our picks, click here.

Where and what to eat in Odaiba?

The area is geared towards families, so you can bet that there are lots of well-priced options. Additionally, Odaiba tends to model itself as a fairly westernized area, so you’ll find a lot of familiar chain restaurants here including Red Lobster and Taco Bell. Expect lots of large (for Japan) sit down restaurants, some with excellent views out over the water. If you want a tackier experience look for a theme restaurant, there are a fair few around to choose from. What you won’t find much of here is small, independent restaurants or cafes.

DiverCity has a food court on the first floor where you can snag some cheap eats. Also, there’s lots of public space with seating so you could stop at a convenience store or supermarket and have a picnic if you feel so inclined.

How to get to and from Odaiba

Yurikamome runs from Shimbashi Station to Toyosu Station. It goes over the Rainbow Bridge and has multiple stops at multiple stations in Odaiba. You can get off at Daiba Station for best access to Diver City and Aqua City, or Odaiba Kaihinkouen Station for Decks and Odaiba Marine Park.

Pro tip: Snag the front facing seats at the very front of the train to get the best views.

Alternatively you can take the Rinkai Line that runs between Shin-Kiba and Osaki stations. It has one stop in Odaiba, Tokyo Teleport Station. From there it’s a short walk to any of the malls or other main attractions.

It’s also possible to get to Odaiba by car – or even by foot – over the Rainbow Bridge. There are a number of parking facilities available for cars, and if you’re planning on doing a lot of shopping this is the more convenient option. If you walk, it’ll take you 25 minutes. You could bring your bike across, but you’re not allowed to ride it over the bridge. Once yuo’re over though, there’s lots of free bicycle parking and it would be a great way to enjoy the greenery and open spaces in the area.

All Articles about Odaiba
Do you want all our best tips on Tokyo? Download our ebook guide!

Things To Do in Odaiba