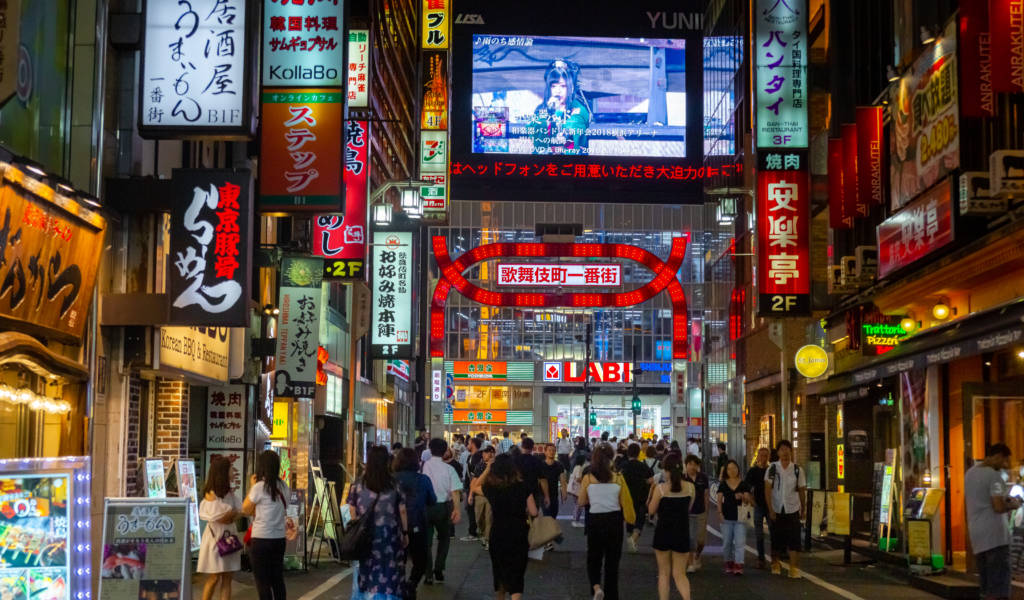 Shinjuku is one of Tokyo’s major hubs. It’s a business-shopping-entertainment district, which means there is something going on pretty much all the time. It’s also a microcosm of Tokyo: there are skyscrapers and neon lights but also yakitori stalls in old wooden shacks; luxury hotels and manga kissa; legacy department stores and discount electronics retailers…

Shinjuku is one of Tokyo’s most famous neighborhoods, and probably a place you want to visit. It doesn’t have many major sites, but it is a big destination for nightlife. Tokyo’s largest red-light district, Kabukicho, is here; so is the city’s gayborhood, Shinjuku Nichome. It’s also a major transport hub, for both Tokyo and the greater Kanto area, so odds are you’ll be passing through here at some point.

Shinjuku is on the western edge of central Tokyo. There’s Shinjuku “ku” (the word for Tokyo’s so-called special wards, of which there are 23), which is super big and includes neighborhoods such as Kagurazaka and Yotsuya. But what people tend to think of as Shinjuku (and what we’re covering here) is the broad area around Shinjuku Station.

In a word: crowded. Shinjuku is a major business district by day and a major entertainment district by night (and a major transport hub during all hours that public transportation runs). The station is crowded; the streets are crowded. This is one of the reasons it feels very “Tokyo.”

A lot happens on the streets, especially near the train station. Touts trying to get you to come into their bars (don’t). People handing out free tissue packets. Buddhist monks (or people just dressed like Buddhist monks? We’ve never been able to figure this one out) with alms bowls. Buskers. Fortune tellers. People sleeping rough. People puking on the pavement…

Shinjuku, like anywhere in Tokyo, is generally safe, but it is still smart to pay attention to your surroundings. In the entertainment district, street harassment (touts, solicitations, bad pick up lines…) is a potential annoyance. It is always better to ignore than to respond. Shinjuku is a 24-hour neighborhood and extremely well lit, so there is a sense of safety in that. Be wary, however, of following touts into bars or clubs (especially in Kabukicho!); extortion and drink spiking has been known to happen.

What is Shinjuku known for?

Thanks to the red-light district, Kabukicho, Shinjuku is known for ~sexy~ nightlife, hostess and host clubs, and love hotels. But it’s also known for nightlife in general.

In the 1960s and 70s, a lot of students and counter-culture types hung out in Shinjuku. There are a handful of jazz bars and jazz cafes left over from that era.

Shinjuku, along with Shibuya, often appears in Western movies and TV shows set in Tokyo. Yasukuni-dori, in particular, has become a kind of visual shorthand for the city (think: lots of neon). That scene in the beginning of Lost in Translation (2004), where Bill Murray is in a taxi looking out on neon-lit streets? Shinjuku. A more recent example is the TV drama Tokyo Vice, which has lots of scenes shot in Kabukicho (among other Tokyo locations).

To the west of Shinjuku Station is Nishi-Shinjuku (literally “West Shinjuku”). This is largely a business district, with skyscrapers laid out in an — unusual for Tokyo — neat grid. The capital building is here.

East of Shinjuku Station is the entertainment district. There are several micro neighborhoods here: the aforementioned Kabukicho and Shinjuku Nichome, and also Shinjuku Sanchome, which has a lot of izakaya and is a popular place to hang out after work.

Is Shinjuku a good place to stay?

There are lots of options here, which is good. Luxury hotels, not really luxury but still nice hotels, business hotels of varying quality, capsule hotels, some hostels on the outskirts. There are a lot of places to eat, drink, and shop right here. And Shinjuku is a transit hub with good access to Narita Airport.

The crowds and the massive train station can be a little intense though, so it depends on how much you want to throw yourself into the Tokyo urban experience. The convenience factor drives prices up while competition drives them down. Unfortunately, most options are at least 10 minutes on foot from Shinjuku Station (though some are closer to Shinjuku area subway stations).

Note: Some totally ordinary-looking hotels are in Kabukicho. And they are, in fact (at least as far as we can tell?), totally ordinary hotels. But if walking through the sexy-time district to get to and from the station doesn’t sound fun to you then check the address before committing.

What to see and do in Shinjuku

The Tokyo Metropolitan Government Building is Tokyo’s monumental capital building. Importantly, it has FREE observatories on its top floors. No need to pay for admission at Tokyo Sky Tree or Tokyo Tower to get that 360-degree view over the never-ending metropolis!

Shinjuku Gyoen is a big garden that has really, really nice grass (no, not that kind). It’s an excellent picnic spot.

Other things you might want to see in Shinjuku include the big Godzilla head statue and Golden Gai in Kabukicho.

The Robot Restaurant was another super popular, uh, attraction, but it closed during the pandemic.

Where and what to eat in Shinjuku

There are lots and lots of options in Shinjuku. Like A LOT.

One famous spot is Omoide Yokocho. This is an alley lined with tiny yakitori counters and cheap izakaya that looks straight out of the 1950s. Most options are pretty cheap (but check to make sure before sitting down).

There are lots of big chain izakaya on Yasukuni-dori and also in Nishi-Shinjuku by the station; these are reliably cheap and often have multilingual touchscreen menus.

Shinjuku Sanchome has lots of smaller izakaya and also a decent spread of restaurants — Italian, Chinese, lots of different kinds of Japanese food. There are cheapish spots and more middle of the road spots. Some places can be a little clique-y or fill up with reservations but others you can walk into with no problems.

Shinjuku is pretty good for ramen — it’s one of the Tokyo “ramen battlegrounds” with a high concentration of shops and fierce competition. Lots of options in Shinjuku Sanchome and also Shinjuku 7-chome.

All of Shinjuku’s department stores have restaurant floors. Try Mylord and Lumine (attached to Shinjuku Station) for cheap options; Takashimaya has the best options but they can be a little pricey (less so at lunch). The best/most popular/newest places will have lines at lunch time.

Another good option is hitting the department store basement food halls (depachika) for picnic items to take to Shinjuku Gyoen. Takashimaya and Isetan have the nicest depachika.

Nightlife and entertainment in Shinjuku

In addition to all those izakaya, Shinjuku has a pretty good bar scene.

Golden Gai is a special spot: an enclave of some 200 bars in old wooden buildings. For decades, it was a hangout for artsy media and entertainment people but in recent years it has become very popular with international travelers, too (at least pre-pandemic).

Shinjuku Nichome also has hundreds of small bars and is definitely its own vibe.

Probably Shinjuku’s most famous bar is the one that allows you to lord over the neighborhood from high above: the New York Bar on the top floor of the Park Hyatt (and featured in Lost in Translation).

In the mood for karaoke? Look for the big chains on Yasukuni-dori.

Kabukicho, meanwhile, has the Toho Cinema multiplex, some big arcades, a bowling alley, plus all of the NSFW options. There’s also the big Wald 9 cinema in Shinjuku Sanchome that screens movies all night.

Pro tip: Book a bar-hopping tour with a local guide and let them show you the best watering holes Shinjuku has to offer.

Nishi-Shinjuku has a super big Yodobashi Camera; outside the station’s east exit there’s a Bic Camera. There’s also BICQLO, which is a combined Bic Camera/Uniqlo, on the east side.

How to get to and from Shinjuku

Shinjuku is a major transport hub. Shinjuku Station is the busiest train station in the country; Shinjuku Expressway Bus Terminal, meanwhile, is a major departure point for long-distance coaches.

Getting to Shinjuku from Narita Airport

It takes about 90 minutes by either train, bus, or taxi from Narita Airport to Shinjuku. There are several ways to make the journey, either in comfort (a direct, high-speed train) or in Cheapo fashion (an ordinary train with transfers).

Getting to Shinjuku from Haneda Airport

The easiest way to get to Shinjuku from Haneda Airport by public transportation is to take the Keikyu line to Shinagawa and transfer there for the JR Yamanote line for Shinjuku. This takes about 40 minutes and costs ¥500. A fixed fare taxi costs ¥7,300 or ¥8,600 between 10pm and 5am.

Getting to Shinjuku from Tokyo Station

This is an easy one: the JR Chuo line runs between Tokyo Station and Shinjuku in 15 minutes (cost: ¥200).

North of the station area is Shin-Okubo, which is Tokyo’s K-Town. There are lots of Korean restaurants and shops selling popular Korean skincare brands here. Many international students live and hang out here so there are halal grocers, curry shops, and Vietnamese coffeehouses, too.

Just south of Shinjuku Station is Yoyogi, a neighborhood on a much smaller scale than Shinjuku. In addition to low-slung office buildings, there are some good local restaurants in Yoyogi (if you’re looking to escape Shinjuku crowds).

West of Shinjuku are Hatsudai and Hatagaya, which bridge the gap between business Tokyo and residential Tokyo (there’s a bit of both). Head here for amenities like supermarkets and shotengai (neighborhood shopping streets), plus lots of inexpensive local restaurants.

All Articles about Shinjuku

Things To Do in Shinjuku

Getting Around in Shinjuku