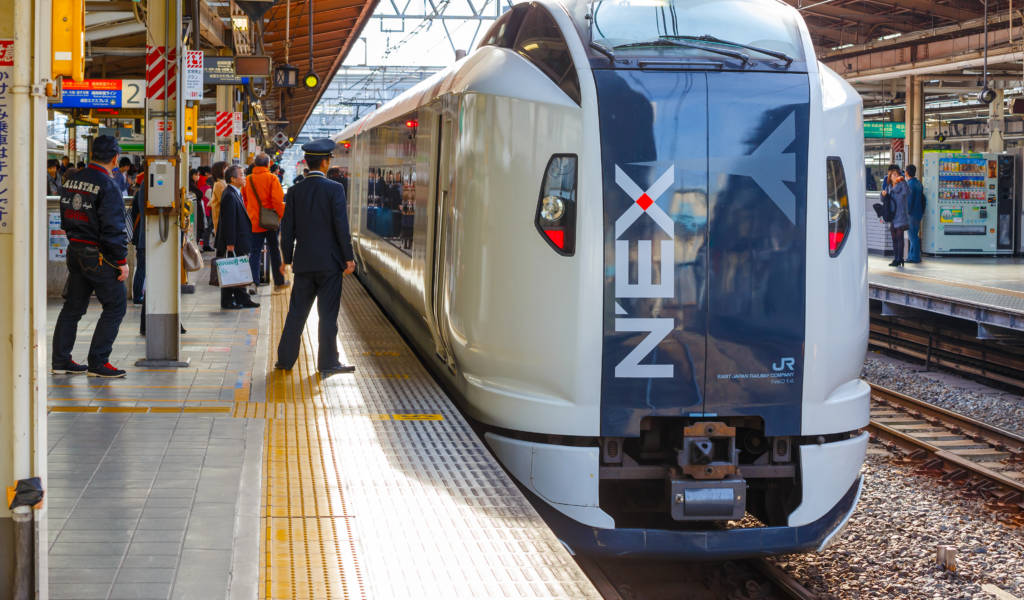 How to Catch the Narita Express (N'EX) into Tokyo

If you’re going to be taking the Narita Express from Narita Airport to your accommodation in Tokyo, you might want to give this guide a read first. To make the process as smooth as possible, we’ve put together a step-by-step walk-through on getting from Point A (the Arrivals hall) to Point B (your destination).

First off, a quick look at local geography. Narita Airport is actually in Chiba Prefecture, which is next to Tokyo. This means that getting into the capital can take a little longer and be a bit more complex than expected. Though not necessarily the fastest option, the JR Narita Express (N’EX) is one of the easiest, most direct ways of transferring into the big city. It takes roughly 1.5 hours to reach Shinjuku, with no need for transfers. Other major stations are also served by N’EX.

It’s worth noting that, depending on your destination and budget, there are also a number of other ways to get from Narita Airport to Tokyo.

When you wheel your luggage out of the Arrivals gate, you should spot overhead signs saying “Trains” or “Railways” in front of you. If you don’t have heaps of heavy bags, you can head in the direction indicated on these signs.

If you are carting the equivalent of three sumo wrestlers around with you, it might be a good idea to arrange for those to be ported before you continue on your way to the train.

Time-saving tip: There should be a small Narita Express ticket sales counter next to the Keisei Line counter as you come out of the Arrivals gate. If queues are short or non-existent, you can buy your tickets here. Just be sure to give yourself enough time (at least 10 minutes, to be safe) to get to the platform.

Once you’ve sorted out your bags and ditched the trolley, just keep following those train signs. They will lead you downwards; note that both escalators and elevators are available (even if they aren’t immediately apparent). From the lower level, follow the signs some more. If you’re in Terminal 1, you may find yourself rolling down a ramp like this.

The area will eventually open up, and you’ll see the JR East Travel Service Center shining red and black (the colors of the Narita Express). If you’re coming from Terminal 2, the train signs will take you to an equivalent JR ticket office.

Snack tip: The nearby convenience store offers a chance to get a can of soda and an onigiri for the train ride.

You can buy your N’EX tickets at the JR Travel Service Center, a smaller JR ticket office or even a JR ticket vending machine—the outlets only differ in their ease of use. While the vending machines have various language options, they can be a bit fiddly if you’ve never used one before. Our recommendation is that you get your tickets from a human.

Note: It’s not possible to buy Narita Express tickets outside of Japan.

Narita Express fares can seem a little steep compared to some of the other airport express trains. A one-way economy-class ticket to Tokyo Station is priced at ¥3,070, with the figure increasing incrementally for other stops on the route.

However, holders of foreign passports can take advantage of the N’EX Tokyo Round Trip ticket, which is a really good deal. ¥4,070 gets you a trip from and to Narita Airport within a period of 14 days. Unlike many of the other rail passes, there is no stipulation about having to have a temporary visitor’s visa, so residents can use it too (provided you’re travelling from Narita, which is a little annoying).

Since all seats on the N’EX are reserved (it is possible to go the unreserved route, but there is no discount for doing so), it’s a good idea to book your ride back to the airport before you rush off to catch your train into Tokyo.

Tourists who are going to be buying the super-value Japan Rail (JR) Pass will be pleased to hear that this covers the Narita Express. However, activating your JR Pass simply to ride the N’EX into Tokyo is not recommended unless you’re going to be undertaking cross-country travel immediately after. Since the JR Pass is limited to 7, 14 or 21 consecutive days of use (depending on which version you buy), it’s best to hold onto it until you’re ready to do some serious travel.

The 3-day JR Tokyo Wide Pass also allows you to use the Narita Express.

If you’re going to be milling around Tokyo for the first few days of your trip, a round-trip or one-way Narita Express ticket, or one of the other transport options from Narita Airport, is a better bet.

Finding and boarding your train

Once you’ve sorted out your Narita Express ticket, simply follow the red overhead signs to the ticket gates, pop your ticket into the slot and walk through, remembering to pick it up on the other side. Make your way to the platform, check the electronic information boards to make sure the train you’re eyeballing is in fact the one you’re meant to be boarding, and hop on.

There are luggage racks at the entrance to each carriage, where you can stow your suitcases. A basic lock is provided. Smaller bags can be kept on the overhead racks running along both sides of the carriage.

The interior of the N’EX is clean and comfortable (try the reclining function on the seats), and—in this writer’s experience, anyway—generally quiet. Once you’ve found your seat, you can pretty much kick back and relax until your stop is announced.

If you haven’t arranged a wifi router or SIM card yet, you can use the free wifi on board to figure out what will work best for your needs. Access instructions can be found on the seat backs, and connecting is fairly straightforward.

Transferring to other train lines

The Narita Express goes directly to the following major stations:

Note, though, that not every N’EX goes to all of those stations. Check the new timetable to see which one goes where, and when.

To figure out whether you will need to take another train after arriving at one of the above stations, input your final destination station on a route guidance site like Hyperdia or Jorudan, and take note of the various transfer options.

Your N’EX ticket is also valid on other JR East trains (with the exception of other swanky limited expresses) within the broader Tokyo area. This means that you can get to your destination without needing to buy another train ticket, as long as you stick to JR lines and don’t go veering off in the direction of subways and such.

What to do at your final station

Simply get off the train and make for the exit gates. The gate will almost certainly swallow your ticket. Be cool and let it go.

The most convenient exit from the station to your accommodation should be listed on your booking form. If it’s not, just pop the address provided into Google Maps and see what comes up. If the station is under a kilometer from your hotel or Airbnb, and you don’t have any special requirements, you can probably walk there. Any further than that, and you’ll want to take a taxi (unless you’re traveling super light, in which case you can probably still just walk).

What to see around Narita

If you find youself in the Narita area for a little longer than expected, or you just feel like it’s got more to offer than an airport, you’re in for a treat. The area of Narita is actually really nice – green and fresh, the airport is but a small aspect. There’s the stunning Naritasan Shinshoji Temple, founded in 940, museums dedicated to contemporary art and aeronautical science as well as traditional shopping streets. Read more about the places mentioned here and plenty others, as well as our guide to layovers at Narita.

While we do our best to ensure it’s correct, information is subject to change. Post first published in March, 2018. Last updated May, 2022.