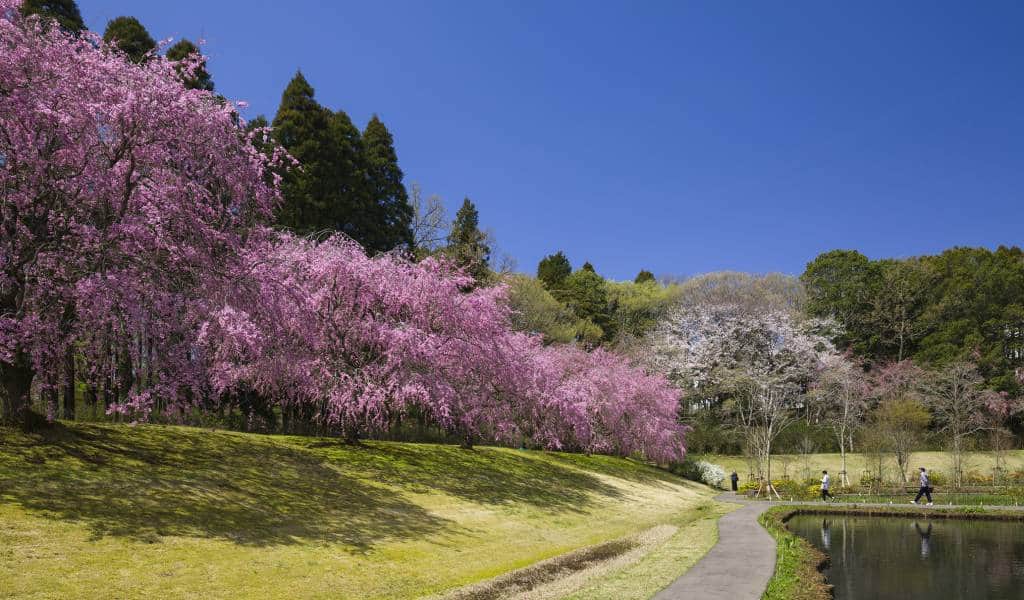 What to Do In and Around Narita

Sitting on the eastern cusp of Tokyo in Chiba Prefecture, Narita is mostly known—to travelers at least—for one thing: the airport. But if you stray a little farther than the departure platform to the Narita Express, you’ll discover an absolute gem of a tourist destination that’s been hiding in plain sight all this time.

If you have an extended layover in Narita, an early flight or you want to take a weekend trip out of Tokyo, this corner of Japan has plenty to offer! The area has world-class museums, quaint retro towns, historic sites, family-friendly activities, and excellent food. If you want to learn more or book an English tour guide, the Narita Airport Transit and Stay initiative is a great resource too.

The DIC Kawamura Memorial Museum of Art, located in Sakura City, is home to one of the most impressive collections of art, both contemporary and classic, outside of Tokyo.

DIC is a Japanese chemical manufacturing company that specializes in the manufacture of inks, pigments, adhesives, specialty plastics, and other vaguely familiar but mysterious elements like polymers—but don’t worry, the museum has nothing to do with any of this stuff.

The museum, which opened in 1990, was primarily the creation of Katsumi Kawamura, former president of the DIC Corporation, and a great art collector. He decided to open a public space to showcase the collection and did so across the pond from his company’s research lab. The museum’s public space is incredibly scenic and densely populated by cherry blossom trees, which attract a flood of local tourists in spring.

The museum’s meticulously curated collection features pieces by Rembrandt, Picasso, Matisse, Ernst, Magritte, Pollock and Rothko. Beyond the gallery walls, there are also outdoor pieces dotted throughout the garden, a well-stocked cafe gift shop, traditional Japanese tearoom, and an elegant restaurant that looks out onto the garden. There’s honestly enough here alone to warrant an art-centric day trip.

While it’s fair to assume that Narita’s Museum of Aeronautical Sciences would be a hive of aviation geeks, that assumption is wrong. Located right by the southern end of Narita Airport’s main runway, this immersive museum has enough hands-on attractions and imaginative projection displays to enthrall even the most aviation illiterate of folk.

Inside the museum’s main room, you’ll find displays of real airplane parts, full-scale replicas, and the most exciting, authentic flight simulators. The staff’s passion for all things airborne is infectious, so before you know it, you too will become a hikōki otaku (airplane geek).

There’s an outdoor observation deck on the third floor of the museum where you can watch all the action of Narita Airport’s southern runway really, really close up. If you want to catch the action from the northern end, then head over to Sakura no Yama Observation Area, which is a 10-minute drive from the museum.

Stop by the sacred sites

Built around 940 AD, Naritasan Shinshoji Temple, known more simply as Naritasan Temple, is one of the country’s most famous temples, especially so in the new year period for hatsumode celebrations.

On the temple grounds sits the temple (of course), a three-storied pagoda and a huge pagoda, known as the Great Pagoda of Peace.

The road leading up to the temple grounds is one of its major attractions: Omotesando. It’s over one kilometer long and is lined with traditional crafts, snacks, sweets, and restaurants, all oozing classic Japanese charm.

If you want to dive a little deeper into Narita’s spiritual scene, then Nichihon-ji Temple is worth a visit, especially in summer when the 10,000 colorful hydrangeas that decorate the temple are in full bloom. Part of the Nichiren sect of Buddhism, this temple is home to monk school Nakamura Danrin. If you’d like a free volunteer guided tour of the site, you can book one through Narita’s tourism initiative, the Narita Airport Transit & Stay Program.

The Shinto shrine Katori, sitting just outside Sawara, is another location to add to your little spiritual pilgrimage. The shrine is the head shrine of 400 Katori shrines dotted throughout the country, and it’s home to the god of family safety, business, marriage, and fertility and childbirth, making it very popular as you could assume.

While there’s plenty of historical sights and museum attractions, Narita also has an excellent culinary scene. During the 18th century, the Tone River attracted around 35 sake brewers to set up shop in the area. Today Tokun-shuzo is an award-winning sake distillery that is one of the few remaining distilleries.

It’s open to the public and offers daily tours—in Japanese, but still worth a visit—the front of the distillery is occupied by a store selling plenty of unique gifts including sake sweets, cosmetics, and other sake-infused drinks like umeshu (plum wine) and yuzu spirits.

Running along the Tone River, about a 30-minute drive from Narita Airport, is Sawara, a merchant town that during the Edo Period (1603–1867) was a bustling transport hub. While today it’s a lot quieter, the picturesque city, with its merchant house–flanked canal, is a great place to unwind and experience traditional Japan without having to deal with the tourist hordes.

Nipponia’s hotel concept is that the city itself is a hotel, so merchant houses are treated as separate hotel rooms, and to access the lobby, guests must wander down along the river to the merchant house turned check-in desk and restaurant. On the second floor of the check-in lobby sits the Nipporia restaurant which serves French-inspired Japanese cuisine and is open to non-staying guests too.

Get out and explore further

An easy bus or taxi ride from Narita Airport, Tako City, is a laid-back rural town that offers ample opportunity to get out and stretch your legs and see the sites without having to venture too far from the airport at all.

You can grab an e-bike rental from Tako Ajisai-kan, the “roadside station” for just ¥500 per day. For a cruisy little adventure, Nichihon-ji Temple is a close ride, and well worth checking out. The Ajisai-kan is also attached to the local, well-stocked Fureai Market. And next door there’s Kitchen Tako serving up popular snacks like onigiri sets, plus dango (sweet dumpling) and rice crackers.

Narita
Written by: Lucy Dayman
Filed under: Things to do
Tags:
Sharing
Questions or comments about this article?
Start a thread on our community forum
Ask our local experts about Tokyo