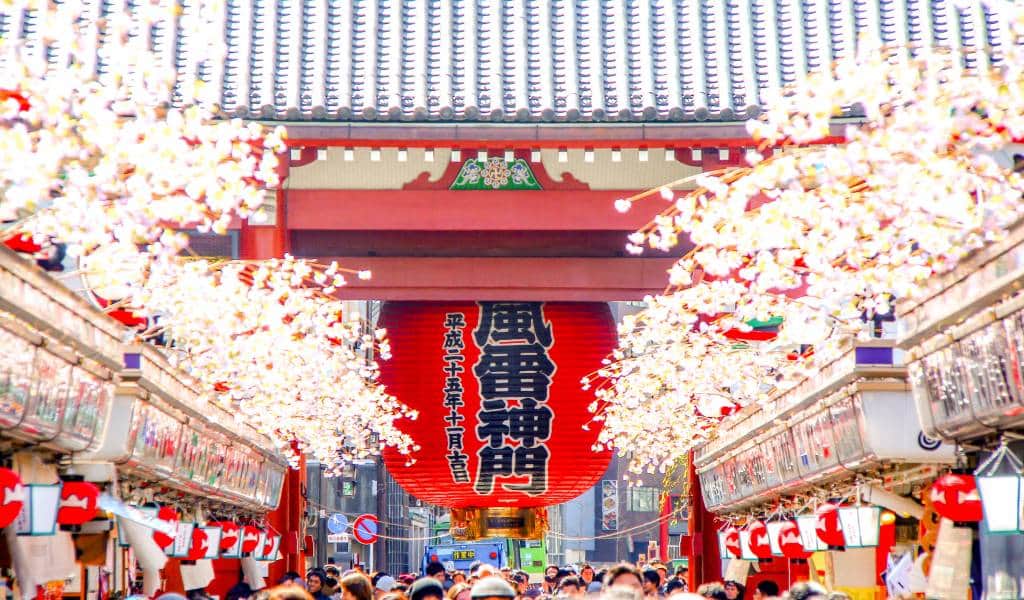 Asakusa is one of Tokyo’s Shitamachi — a traditional, low-rise part of the city. Although on the surface it’s still ye olde Japan, this was the first part of the capital to have significant Western influence; it was even the site of Japan’s first cinema.

Asakusa is a great place to stay if you’re on a budget — mainly because it’s a little far away from the central Tokyo attractions. Despite this, it has plenty of things to do while also providing a relaxing and quiet oasis.

Asakusa lies in the north-east of Tokyo and is part of Taitō City. The traditional town is situated on the Sumida River and is not far from Ueno — another Shitamachi. Many tend to combine both in a day trip (with an added tour of Akihabara).

Asakusa is quintessential Japan: copious temples, festivals, crafts, rickshaws, and kimono. So much so that it’s probably the most visited tourist spot in the city. In high season, expect to waddle slowly down the iconic Nakamise-dōri street — the approach to Sensō-ji Temple — with the rest of the crowd. However, hidden away from the main tourist attractions you will be able to find plenty of peace and quiet.

Despite the overcrowding of tourists, you would be very unlucky to encounter any pickpockets here. You may have to watch out for pushy rickshaw drivers and missionaries on the street beckoning you into their temples — even if they offer free food, try to resist, or you could spend hours inside.

What is Asakusa known for?

First and foremost, visitors come to the neighborhood to see a slice of old Japan (Sensō-ji), but back in the day, Asakusa was the place to go if you wanted to be entertained — geisha, theaters, cinemas, the whole lot. It has since been overtaken by Tokyo’s other entertainment districts and is now mainly known for delicious sweet treats and its unique view of Tokyo Sky Tree.

There is a unique Tokyo skyline to see in Asakusa, one that features a giant golden statue perched on top of Asahi Beer Hall. It looks comically like a shining dollop of poop and so has earned the nickname “The Golden Poo”. (A golden poo is actually meant to bring luck in Japan, so not the insult you might think.)

The story goes that it was designed by Philippe Starck to be a flame, but unfortunately, it was too heavy to stand upright in its intended position and had to be placed on its side. Some also say that residents complained of the view or that it looked even more like feces when placed vertically. We will never know the full truth as all records have been wiped clean.

What is there to see and do in Asakusa

Sensō-ji is one of Tokyo’s most historical temples and is an absolute must-see. Look out for the impressive Kaminarimon Gate that marks the entrance-way to the temple, and weave your way down the stall-lined Nakamise-dōri shopping street (a great place to get rice crackers and all sorts of souvenirs) to the Hōzōmon Gate and the main hall. Many visitors also rent a kimono before making this trip. You can find more temples all around Asakusa, including Matsuchiyama Shōden Honryū-in.

Keep your eyes peeled for the giant Golden Poo sculpture on the roof of the nearby Asahi Breweries headquarters. If you feel like getting a closer look, hop on a river cruise (technically a water bus). You can get to the Hama-rikyū Gardens and Odaiba this way, and a number of other destinations too.

Amuse yourself in Asakusa with Hanayashiki, the oldest amusement park in Japan. Keep the carnival spirit and head over to Reeast Room where you can throw an axe for fun or try your hand at an escape room.

On the other side of the river, across a scenic bridge and away from the vibey streets of Asakusa, you’ll find Tokyo Skytree — the expensive tourist trap (follow these cheapo tips if you must check out the tower). The best views of the tower can be seen from the Sumida Riverside, Ekimise Hare Terrace (which becomes a beer garden in the summer), and the Asakusa Tourism Center.

The area at the base of the tower is dubbed Tokyo Skytree Town. This bustling mini-city hosts plenty of restaurants, shops, and the Sumida Aquarium. Once finished, follow the canal back past the newly developed Tokyo Mizumachi Shopping Mall and head towards Sumida Park and the Sumida River.

What festivals are held in Asakusa?

Asakusa is a hub of traditional Japanese cultural festivities and events. Whether it’s experiencing bartering for lucky rakes during the Tori-no-ichi, seeing the portable shrines of the Sanja Matsuri shaken through the backstreets and alleyways, or experiencing the golden dragon dance at Sensō-ji, Asakusa consistently offers glimpses into its storied Edo past.

There are also plenty of events that make use of the nearby river as a backdrop, such as the Sumida River Fireworks and the candle-lit lantern festival.

Asakusa is known for its handmade crafts and high-quality souvenirs. Connected to, but just far away from, the hustle and bustle of Nakamise-dōri, you can find many other old-style shopping streets that are a little bit calmer. Dembōin-dōri is one of them and sells handicrafts and other trinkets from a row of stalls straight out of the Edo Period. It’s also worth pointing out that the Uniqlo in Asakusa is one of the more interesting branches.

If you have an interest in Japanese knives or cooking utensils, or if you’ve ever wondered where all those plastic display food models come from, head over to Kappabashi-dōri. The start of the street is marked by an enormous Chef’s head on the roof of an office building.

Where to eat and drink in Asakusa

Asakusa is famous for its soba noodles — which means that at any given time, half of the country will be lined up to try a bowl. Our suggestion is to stroll around and scope out the least crowded place, but if you get stuck, you can always get your soba fix at Fuji Soba.

You can also try the local budget places for lunch, such as Ramen Men (Menmaru) Maru or the Delica Paku Paku bento shop. Along with Tsukishima, Asakusa also has a high concentration of monjayaki (Kantō-style savory pancake) restaurants.

If you’ve got a sweet tooth — or even if you haven’t — you need to grab a melon pan or one of these other Asakusa sweets. Why not wash it down with a coffee from one of these neighborhood cafés? Asakusa is known as a great rest spot after (or before) exploring other parts of Tokyo.

Nightlife and entertainment in Asakusa

While not known for its nightlife (you won’t find overflowing clubs like Shibuya or Roppongi), Asakusa has its own after-dark vibe that keeps tourists and residents coming back. The illumination of a closed Sensō-ji Temple is particularly noteworthy and without the day-crowd, there’s finally room to breathe.

If you are looking for places to drink and be merry, there are plenty of cheap izakaya with outdoor seating along Hoppy Street — most businesses also have their own take on nikomi (Japanese stew). Keep the bar hopping going and see what you discover in the backstreets of Asakusa.

Need someone to help you find your way? A fun idea is to take part in a night foodie tour of Asakusa — try the best of everything, plus make new friends.

How to get to and from Asakusa

Don’t be confused, but there are four separate stations that make up Asakusa Station. They all deal with different train lines but are all within walking distance of each other. Note that only Tobu Railway Asakusa Station is above ground.

Unfortunately, none of them are JR (Japan Railway) stations, so you cannot use your JR Pass to get to Asakusa directly.

Getting to Asakusa from Narita

Grab the Keisei Skyaccess train from any Narita Airport terminal station and get to Asakusa directly in just under an hour for ¥1,310. There are also cheaper but longer options which we highlight in our Narita to Asakusa guide.

Getting to Asakusa from Haneda

You can get a direct train from Haneda Airport to Asakusa Station and vice-versa. Get on the Keikyū Line bound for Asakusa, and the train will eventually turn into the Asakusa Toei Subway Line. The journey takes around 40 minutes and costs ¥530. Not all trains are direct so make sure you check the board.

Getting to Asakusa from Tokyo Station

There is no direct train to Asakusa from Tokyo Station, but you can take the Ginza Line from Nihonbashi Station (around a 5 to 10-minute walk from Tokyo Sta.) to Asakusa. The journey takes 15 minutes and costs ¥170. Alternatively, you can get the JR Yamanote to Ueno or JR Chuo Line to Kanda and change to the Metro for Asakusa, but this takes longer and costs around double.

Where to stay in Asakusa

Asakusa has a large number of guest houses catering for tourists, including the popular (and pretty damn reasonable) Khaosan World Asakusa Hostel and Nui Hostel. You can find more information about these establishments, and many more besides, in our handy Asakusa accommodation guide.

Just south of Asakusa is Kuramae, a neighborhood known for its retro atmosphere, second-hand stores, and excellent coffee shops. It’s definitely worth a stop while you are in Asakusa. As mentioned, Ueno Park is also pretty close.

Because Asakusa is so well connected to the Sumida River, there are many day trips that include a water bus. You can grab one towards Hama-rikyū Gardens, hop off, and walk to Ginza and Tokyo Station. Check out our itinerary.

Hungry for more? Take a look at our other itinerary that includes Tsukiji and Akihabara. If you want to venture further afield, see our things to do in Ueno guide.

All Articles about Asakusa

Things To Do in Asakusa

Getting Around in Asakusa