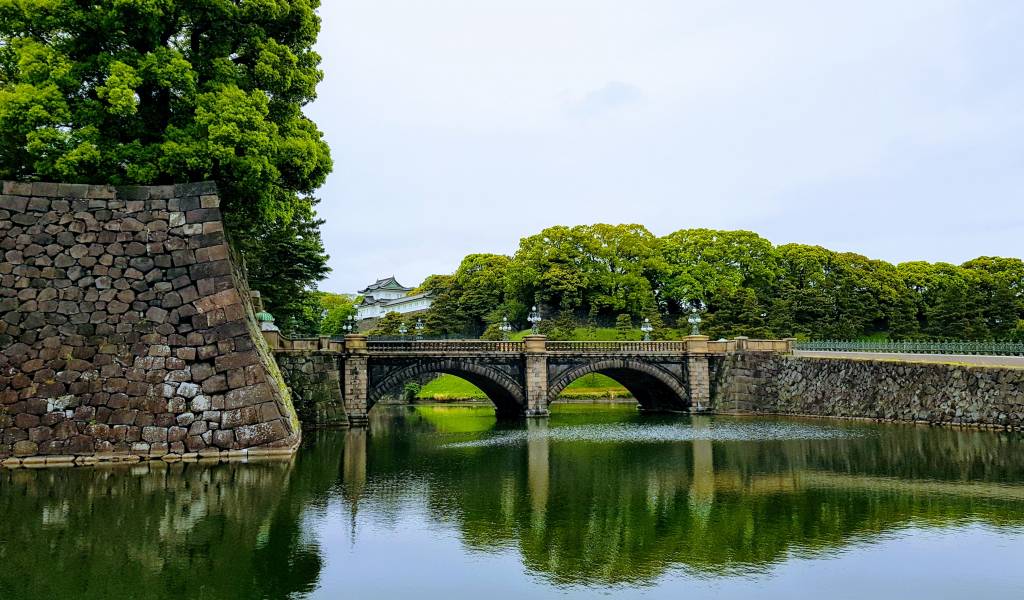 This one-day itinerary takes you on a mellow tour of Tokyo’s historical and cultural hot spots. Starting in Asakusa, you’ll meander your way down to Hamarikyu Garden, stroll through the swanky streets of Ginza and have a gander at its architectural wonders, pop by the Imperial Palace, and finally roll into Tokyo Station Ramen Alley in time for a ramen dinner. Whether it’s your first time in the capital or you’re a long-time resident with family or friends visiting, this cheapo self-guided tour won’t disappoint.

Make your way to Asakusa and follow the signs to Sensoji Temple, where you’ll be starting the tour. Find the main Kaminarimon Gate and take the obligatory photo under its huge lantern. Then proceed along Nakamise Street and have a look around. This is one of Tokyo’s biggest, oldest and most popular temples, home to the rather rough and rowdy Sanja Festival, which takes place in May.

Nakamise Street is 200 meters of stalls selling everything from yukata to traditional fans, pins, clothes emblazoned with samurai logos and more—this is a great place to get those kitschy Japan souvenirs. Be sure to sample the sembei rice crackers and taiyaki.

Make your way up to the big incense pot at the end of the path leading to the temple, and watch as visitors waft the smoke around their bodies. The idea is that it purifies you—go ahead and try it if you feel like it.

When you’ve seen all there is to see at Sensoji, pop into the Matsuya Department Store, which you can’t miss. It’s close to the temple and station. You can get a really decent bento (a packed lunch) or some sushi for less than ¥1,000 on the basement floor of the store.

Cross the road to the Asakusa/Himiko Water Bus Pier. Get yourself a ticket to Hamarikyu (¥800, plus an unavoidable ¥300 fee to enter the gardens), hop onto the Suijo Basu boat and relax. On your way down the river you’ll pass under 10 or so bridges and you’ll see Tokyo Skytree—the city’s tallest tourist trap. Snap some photos and sip on a cup of the specially brewed beer you can buy on the boat. You can check the “bus” timetable here.

Hamarikyu is a splash of green at the mouth of the Sumida River—an oasis in the built-up city. The carefully landscaped garden has a lot of history, dating all the way back to the Edo Period, when it was part of the Tokugawa Shogun’s residences. Depending on what time of year you go, you might see hydrangeas in bloom, azaleas, weeping cherry blossoms, fiery maple trees or some other quintessential floral markers of the seasons in Japan.

While you’re ambling around, look out for the 300-year-old pine tree, as well as the teahouse. You’ll find the latter on Nakajima—the island in the middle of the pond (which, incidentally, is a tidal sea water pond—and the only one in the whole of Tokyo). There are lots of lovely picnic spots to enjoy your lunch around the pond.

The cedar bridge leading to Nakajima has 300 years of history too, which you can learn about on one of the free garden tours (in English), or by using the voice guide devices available at the garden entrance. You can experience a simple tea ceremony for about ¥500. You’ll be given a bowl of matcha—strong green tea, and a sweet to offset its bitterness.

Next, mosey over to Ginza. Leave the gardens and walk down the right side of the elevated highway until you get to the big road called Chuo Dori. You’ll pass the Nakagin Capsule Building on your right. Despite the name, it’s not a capsule hotel—it’s a bunch of office and apartment pods, skirting demolition, designed by legendary Metabolist architect Kisho Kurokawa. We think it looks like something out of a sci-fi novel.

You’ll find Hakuhinkan Toy Park, one of the most famous toy stores in Japan, on the other side of Chuo Dori. It’s not cheap, but it’s great for a look around, and if you’re traveling with kids, they’ll love it. There are tons of toys set up for them to play with.

Walk down Chuo Dori until you hit the 4-chome crossing, then turn left and head in the direction of Hibiya. There is some interesting architecture around here—two examples being the Hermès building that was designed by Renzo Piano and the Mikimoto building by Toyo Ito (this one is tucked down a side street). The area has the biggest concentration of notable modern architecture outside of the ultra-posh Omotesando district.

When you get to the Sukiyabashi Crossing, check out Sony Park (formerly site of the Sony building) and explore the free museum underneath. Farther on, closer to the Hibiya intersection, look for Hibiya Midtown and look out for a random Godzilla statue in a park.

If you’re feeling hungry after all the walking, you can backtrack a little for sushi at the super-famous Sukiyabashi Jiro restaurant on the basement floor of the Tsukamoto Sogyo Building. The Michelin Guide gives it three stars and there’s even been a film made about it. Make sure you book a year in advance and bring ¥40,000 with you though—or you could just go to the nearby Sushizanmai and get very good sushi for about 1/40th of the price.

And if you’re keen on tasting some traditional Japanese sake, take a little detour and round off your meal with a cup or two at Shinshu Osake Mura which is nearby in Shinbashi. It’s one of the nicest and cheapest sake bars in Tokyo. They have a good range of beers too.

If you’re not too tired, you can keep going until you get to the southeast side of the Imperial Palace. The palace was built on the site of Edo Castle and has a kick-ass moat. What’s rather interesting is that Japan’s Imperial Family actually still live on the property—though of course, you can’t access that part.

The palace grounds are vast and very impressive, but, be warned—almost impossible to cover in one visit, especially on hot and sticky summer days! We recommend strolling around Kokyo Gaien, which is on the southeast corner. You can see the Nijubashi Bridge from here, as well as get a good feel for the black pines and sweeping lawns of the place.

You can also chill out in Hibiya Park, which is just across the road.

On your way to the Imperial Palace, a nice idea is to pop into the Kotsu Kaikan building in Yurakucho, where you can hang out on the rooftop and watch the Shinkansen swooshing past below. The building is close to Exit C9 of Ginza Station (the Hibiya Line side).

Our tour ends at Tokyo Station, a stone’s throw away from the palace. The Marunouchi side of the station is a classic facade of red brick and was renovated a few years ago to restore it to its original 1914 glory. This nostalgic landmark is definitely worth a look and a photo or two.

For dinner, head into the station and down to Tokyo Ramen Street, where a whole bunch of ramen shops are conveniently lined up for you to choose from.  You haven’t experienced Japan until you’ve tried this mega popular noodle dish (originally an import from China). As ramen almost always uses a meat broth, vegetarians will want to head to T’s TanTan Ramen in the Keiyo Street part of the station instead of the Ramen Street (you have to enter through the ticket barriers to access Keiyo Street). It’s 100% vegan.

Train fare: Depends where your accommodation is, but probably ¥500 to ¥1,000 for the day’s touring.

If you’re interested in a visit to Tsukiji, take a look at this 1-day itinerary too.

Grab a Pasmo or Suica for slightly cheaper fares and hassle-free transfers. You can check your train routes and fares on Hyperdia.com