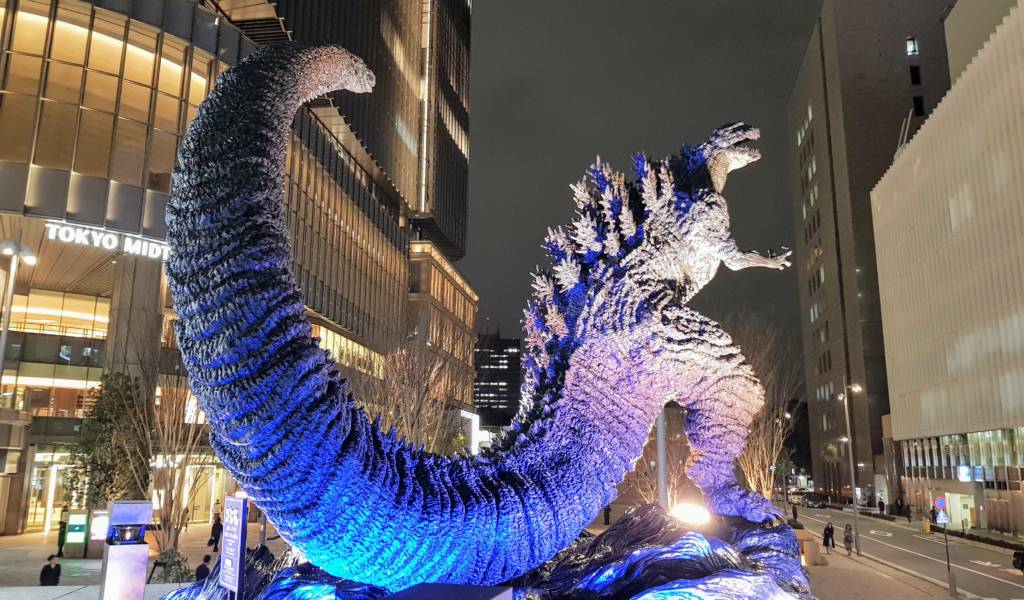 Godzilla in Tokyo: Getting Up Close and Personal with the King of the Monsters

Tokyo Bay has long been the stomping ground of Godzilla, infamous God of Destruction, so it should come as no surprise there are plenty of great spots to snap a photo.

This Godzilla, towering over the Toho Cinema in Shinjuku, is probably the most famous in Tokyo. On closer inspection, it’s actually just a head and claw, but it still cuts a pretty intimidating figure.

Every now and then you can hear his classic roar booming throughout the area. His eyes light up, and a neon blue stream of “atomic breath” projects into the night sky—presumably to the chagrin of whoever’s trying to sleep in the hotel rooms directly opposite. If you’re a guest (or cafe visitor) to said Hotel Gracery, you can actually get up to the rooftop for a close-up photo, but the effect is better from the ground.

Predictably enough, the nearby Don Quixote store sells a range of Godzilla-themed novelty goods in case you fancy picking up a memento.

This happy chap stands guard outside the Toho Studios building in Setagaya. Modeled after the early suits, he’s very much the classic Godzilla—you can practically see the judo expert trapped inside.

You’ll find this beast lurking just south of Yurakucho Station, attached to the Hibiya Ticket Box. Apparently Japan’s biggest full Godzilla statue, this version looks to be Shin Godzilla, who kindly wiped my neighborhood clean off the map back in 2016. It’s definitely larger, leaner and meaner than its portlier predecessor. According to the plaque, the statue houses the final shooting script and storyboard from the 1954 movie.

Hungry for more? Plenty of Tokyo’s most iconic buildings have been featured on the big screen:

General consensus is that Yatsuyama Bridge is Godzilla ground zero. This bridge has the dubious accolade of having been the first of many landmarks destroyed in the 1954 classic. On your average day it’s not all that exciting (it’s just a regular bridge after all), but if you’re a die-hard fan, you might want to take a peek while you’re around Shinagawa.

Destroying Tokyo Tower is practically a rite of passage for any big-time kaiju (literally “strange monster” as well as the Japanese film genre that features giant monsters causing city-wide upheaval) trying to make a name for itself.

For scale, the tower stands at 333 m, while the most recent (live action) Godzillas are between 120 m and 150 m. If you’re visiting Roppongi, you’re almost certain to see this landmark up close. When it comes to going up the tower there are better views of the city these days, but few others have been used as hatcheries by Mothra.

It looks to be in good shape now, but the Diet Building may have been flattened more than any other building in Tokyo. Unless you’re here on political business it’s unlikely you’ll pass by, but you might catch it if you find yourself around the grounds of the Imperial Palace.

Taking home a kaiju of your own

If you’re on the prowl for premium merchandise, your best bet is the official Godzilla store on the ground floor of the Marui Annex mall near Shinjuku Station. From figures and pins to artwork and stationery, if you can print a monster on it, they’ve got it.

There’s also a reasonably extensive clothing section, with underwear and tees starting at around ¥2,500. On the higher end (around ¥45,000), you can pick up some pretty fierce embroidered jackets in a few different designs.

For vintage merch, your best bet is a flea market (such as Ohi Racecourse) or secondhand store. Most Hard Off and Hobby Off stores, for example, are absolutely crammed with cheap swag—ranging from high-end statues to loose vinyl and action figures. You can pick up some for an absolute steal. If you can find room in your heart for an obscure, unloved villain-of-the-week, you might just make a very powerful friend for life.

Written by: Felix Wilson
Filed under: Museums And Exhibitions
Tags:
Sharing
Questions or comments about this article?
Start a thread on our community forum
Ask our local experts about Tokyo