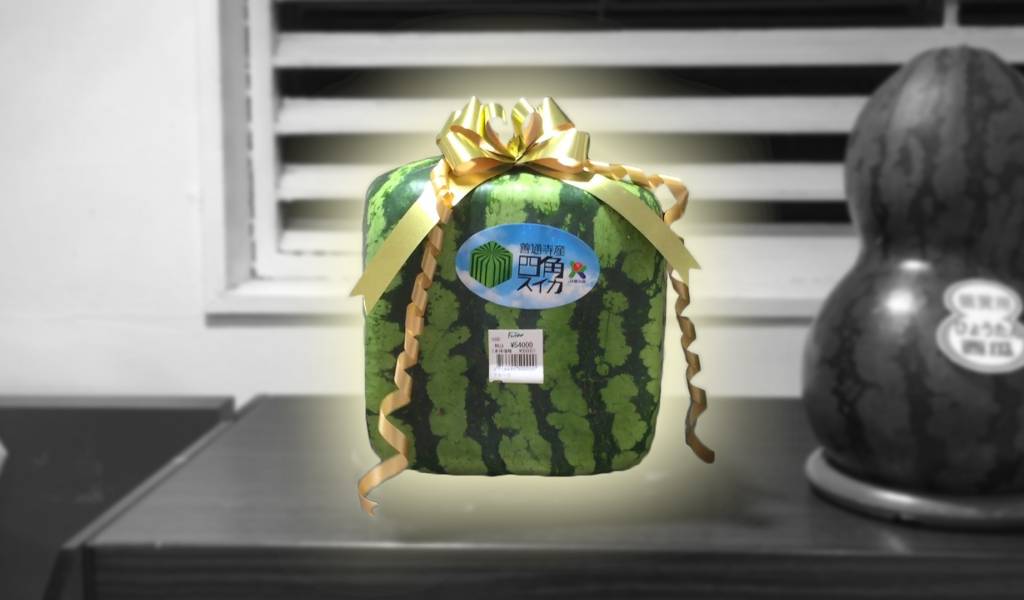 Pic: John Daub – Only in Japan

Square Watermelons: Summer in Tokyo with an Edge (w/ Video)

It all starts with a casual stroll through one of Tokyo’s basement-level department store supermarkets.

In the corner of your eye you catch something green and square, and as your mind tries to process that with a big “huh?”, your head turns to confirm that…yup, it’s a real square watermelon.

It’s a real head-turner, and that’s the point.

One of our favorite summer fruits has become a cube, and we in Tokyo can thank Zentsuji City in Kagawa Prefecture for that. The small city down in Shikoku has been producing them for over 45 years and I flew down there to try to figure out what I was seeing in the big city. It was the only way to become a believer.

If you want to get straight to the farm and see these things grow, watch the video here:

What’s the deal with these square watermelons?

About 45 years ago, ice cream and an expanding beverage market started to eat away at the watermelon market during the summer. As a way to battle back, a man in a small town famous for watermelons decided to change the course of fruit. He started creating square watermelons and…it failed miserably.

The cost was too high and the public didn’t really want a square watermelon for such a high price.

When things didn’t go his way, he changed course again, and this time it succeeded.

Square watermelon evolved into a display fruit for department stores and fruit stands who gladly paid for the higher price. To attract more customers, having one of these in the display window really makes a statement. Today, that is it’s purpose. It’s not to be eaten but to be shown off and make people’s heads turn.

I had a long talk with the founder’s son, Yamashita-san.

When his father decided to step down as the manager of the square watermelons in Zentsuji, no one in the group raised their hand to take over. It was then that his son took over for his father’s legacy. To this day, the Yamashita family still grows square watermelons with the same passion as 45 years ago. The only difference is that the watermelons today are perfectly striped, square and absolutely unripe.

The square watermelons are best seen or purchased from July 1st to August 20th.

Where do they grow?

There is only one place in Japan that can legally grow square watermelons. Zentsuji has a patent on it and it can only be grown in this town in Kagawa prefecture.

Tokyo is the biggest market for square watermelons but they’re exported to several countries where they fetch a very high price! Some have turned up in Russia with price tags as high as $900!

Yamashita-san’s father created a metal and glass box that allows a watermelon that is a couple of weeks old to grow happily with the vine still attached on the outside. It’s not easy. Most are failures because the lines aren’t perfectly straight or they’ve tilted and the stem is awkward. These are destined for display windows so they must be near flawless.

Yamashita-san had a watermelon that lacked perfectly straight lines. We decided to use this one for an unboxing and taste test.

The first thing I saw was that the inside was not the red/pink color I’m used to. It was a mix of red, orange and yellow—an unripe watermelon. I couldn’t get over the way it sat flat on the cutting board. Pieces had corners!

It didn’t smell sweet which means it didn’t taste sweet. It wasn’t bad, but I can definitely say it’s not in my top 10 best fruit-tasting experiences in the world.

It tasted a little like a cucumber and a squash. Watery and buttery with a very small sweetness, probably in the pink parts. It’s something you eat once and then move on to the Japanese White Strawberry—safely in my top 10, which I also have a video (and Tokyo Cheapo article) about.

Where to buy the square watermelon of Zentsuji

If you want to buy one, Tokyu Food Show seems to stock them until the end of August.

Prices range from 16,000 to 54,000 yen here. As you can guess, the longer it sits, the cheaper it gets since stores want to get rid of them to recoup the money paid for them.

Isetan in Shinjuku and Daimaru in Tokyo Station also carry them.

It’s meant to be unique. Just like Tokyo Tower, Hachiko Crossing, Shinjuku’s neon signs and Asakusa’s temples, the square watermelon on Zentsuji is also on display around Tokyo and it’s not to be missed!

I really want to go to Zentsuji

Okay, I’m not going to stop you. The town is an important stop on the 88 temple and shrine religious pilgrimage around Shikoku. Zentsuji Temple has a history going back to the year 813.

It’s also the home of the world’s hardest bread, katapan. But wait, there’s more! Stop by a small temple dedicated to breasts and child rearing. It’s called Chichi Yakushi Temple or as I like to call it, the “Temple of Boob” which any adventurer must see to believe. Zentsuji is in the Sanuki region and the udon is dynamite. Try Miyagawa Seimanjo (宮川製麺所) for the best udon around—they’ve been making it fresh every morning for over 70 years.

How to get to Zentsuji from Tokyo

Zentsuji is a cheap flight from Tokyo to Takamatsu on Jetstar—5,000 to 9,000 yen depending on when you book. After a 30-minute train ride, I was here—which seemed like nowhere. Zentsuji is not the entertainment hub of the world like Tokyo is. Being one of the important stops on the 88 temple pilgrimage around Shikoku, perhaps only the ghosts roam at night, which is what my guide at the Zentsuji tourism office joked. There are very few young people living here and the city is dark and quiet by 8pm on most nights.

ONLY in JAPAN series