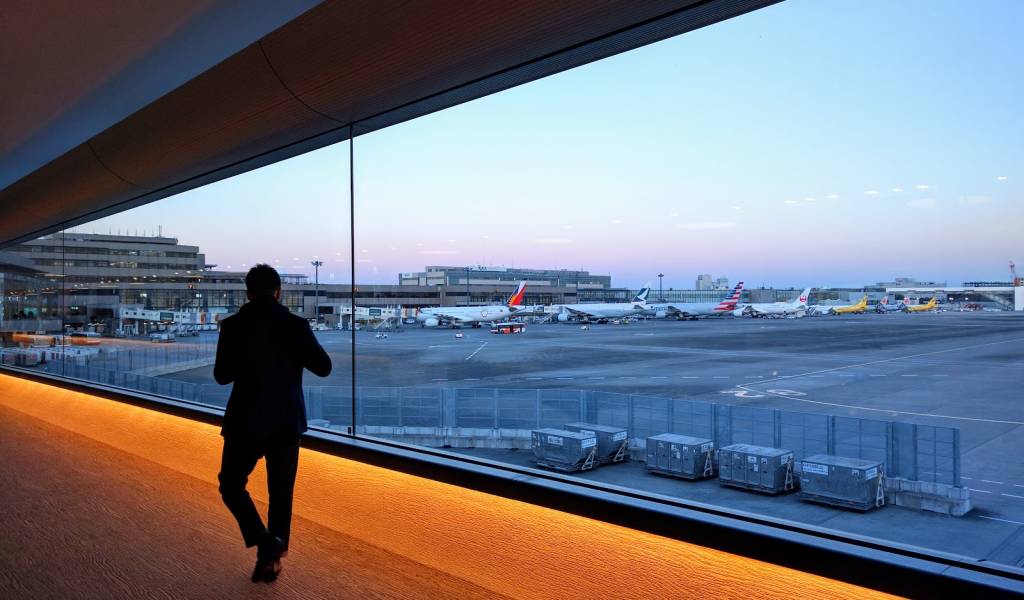 Find the Best Transport from Narita Airport to Tokyo

For newcomers to Tokyo, it can come as a surprise that Tokyo’s main international gateway—Narita Airport (NRT)—is not close to Tokyo at all. In fact, this Tokyo airport is so rural and remote that the view on the first part of the train ride from Narita to Tokyo is predominantly of rice paddies—oh, and a faux-Dutch windmill. In more practical terms, you’re looking at a distance of about 80 km (50 miles) from Narita Airport to Shibuya Crossing.


Since Tokyo is such a vast metropolis, there’s no “one-size-fits-all” answer as to which method or route is cheapest/best for getting from Narita to your accommodation in Tokyo. However, for major central locations, like Shinjuku, Roppongi and Shibuya, it might help to have a look at our mini guides—they cover the fastest, cheapest and easiest transport options. You’ll find these, plus more general NRT-Tokyo route information below, including bus and train prices.

Pro tip: If you don’t mind spending a little extra, we suggest the simple option of a private airport shuttle. This costs ¥3,000–¥8,000 per person, depending on the size of your group, and where you’re going. Also worth a mention is the speedy Keisei Skyliner train, which costs ¥2,800 and includes a 24-hour subway ticket if you book online.

While finding the cheapest transport to get from Narita to Tokyo is a worthy quest in itself, it has become more important because of the arrival of low-cost carriers, many of which use Narita Airport as their base of operations for domestic flights out of Tokyo. Some of the fares are cheap enough to make tourists coming to Japan consider whether they should get a Japan Rail Pass or just book a couple of flights on an LCC. However, since Narita Airport is not in the middle of Tokyo (like the much more conveniently located and modern Haneda Airport), transport fees to and from Tokyo should be factored into your overall costs. Here’s more on those transport options and prices.

Getting in late at night? Check out our dedicated guide to late-night transfers from Narita Airport.

Full transport guide: How do I get from Narita Airport to Tokyo?

Buses from Narita to Tokyo

Note: Although Narita Airport Limousine buses are currently operating, the frequency of services and the destinations are greatly reduced. This may improve depending on border regulations.

The convenience of not having to cart your luggage around is great, but the Airport Limousine Bus service is not the cheapest option. Also, while comfortable, the buses are, in fact, the least limousine-like wheeled transport you are likely to take. They are simply coaches that run to major hotels and stations (currently only Shinjuku Station and TCAT) in the Greater Tokyo area for around ¥3,100 one way and ¥4,500 for a return ticket.

You can usually book limousine bus tickets online in advance, but due to the ongoing COVID-19 situation, it might not be an option for your travel dates. If that’s the case, you can buy your tickets from the bus counters in the airport lobby.

Traveling with lots of luggage? You can have it ported from the airport to your accommodation (or vice versa), making the Narita transfer easier.

Note: The Tokyo Shuttle Bus (Airport Bus Tokyo-Narita (TYO-NRT)) is still running between Narita and Tokyo, though advance reservations are not possible (you have to buy your tickets on the day) and the timetable is subject to change.

A couple of years ago, the popular Tokyo Shuttle and Access Narita buses were merged into the Airport Bus Tokyo-Narita (TYO-NRT). Regular daytime tickets cost ¥1,300 for adults and ¥650 for kids, and stops include Tokyo Station (Yaesu Exit), Ginza Station and Shinonome. Night bus tickets are double at ¥2,600 for adults and ¥1,300 for kids. The journey takes about 65 minutes.

Buses from Narita Airport to other places in Japan

Getting to more far-flung destinations is a little difficult, as buses can rarely be booked directly from the airport. However, Willer Express has information on routes direct from Narita to Mt. Fuji/Kawaguchiko, and Kosoku Bus can help you out with a ticket from Narita to Hakuba. While scheduled services from the airport are rare, there are plenty of buses in the other direction from places like Nikko and Omiya—again, check Willer Express.

Low-cost taxis from Narita to Tokyo

A regular taxi (or Uber) from Narita Airport to central Tokyo is expensive–usually over ¥26,000, so it only makes sense if you are traveling in a group of 2-4, or in a real pinch. The private airport shuttles we recommended earlier might work out cheaper, and can also seat more passengers (up to 6, whereas a taxi is limited to 2-4, depending on luggage).

Regular trains from Narita to Tokyo

If you don’t have much luggage or don’t mind carting it around on foot, it may interest you to know that the cheapest regular trains that run the route between central Tokyo and Narita Airport are on the Keisei Line. The good thing about the Keisei Line is that it connects with the Toei Asakusa Subway Line and the JR Yamanote Line (Tokyo’s central loop line), so it can be accessed from a lot of different stations in central Tokyo. The bad news is that it’s a regular train—so catching it with your suitcase during rush hour may be hazardous to your health! The journey takes between 80-120 minutes, depending on where you’re heading.

Pro tip: To help you on your visit, we’ve put together a comprehensive guide to taking Keisei trains from Narita to Tokyo.

Cheapest train from Narita to Tokyo – the Keisei Limited Express

Here’s a summary of the route and cost from Narita Airport to some of the main stations in Tokyo:

If you’re wanting to take one of these cheapo options, at the Keisei train ticket counter, just ask for a ticket to your destination (but explicitly say not on the Skyliner). Or if you’re planning on having a few days in Tokyo, ask for a Suica or Pasmo card—this is a top-up IC card usable on all trains, buses, etc. in the Tokyo area. You can also get a card from JR station ticket offices, and almost all railway ticket machines.

There are three types of express trains running from Narita to Tokyo and the surrounding areas.

In addition to the regular trains detailed above, Keisei offer two speedy options from Narita to Tokyo.

Slightly more expensive than the regular Keisei train is the significantly faster Sky Access Express (not to be confused with the Skyliner), which actually offers better access to central Tokyo than the Skyliner because it dives into the Toei Asakusa Subway Line instead of arriving at the relatively inconvenient Nishi-Nippori or Ueno Stations. You’ll pay about an extra ¥200 over the regular train, so, for example, the trip from Narita to Asakusa will cost you ¥1,310 (and it takes about 55 minutes). In our opinion, the extra couple hundred yen is worth it. But for maximum comfort and convenience, the Skyliner (below) is your best bet.

The snazzy Skyliner offers the speediest travel time—just 36 minutes to Nippori or 41 minutes to Ueno—and it will cost you ¥2,800, including a 24-hour subway pass, if you purchase a ticket online.

Again, we recommend looking at our dedicated guide to taking Keisei trains (regular, Access Express or Skyliner) from Narita to Tokyo—it’s chock-full of useful info and discount hacks.

The Japan Railways N’EX Tokyo Round-Trip ticket provides round-trip travel from Narita to Tokyo and back for ¥4,070 for adults and ¥2,030 for children. The ticket will get you as far as Kurihama in Kanagawa Prefecture and Omiya in Saitama, which is extraordinarily good value. It’s only available at Narita Airport to foreign passport holders (the cool thing for residents is that you don’t need a tourist visa) and has a validity period of 14 days.

All N’EX trains go to Tokyo, but if your destination is Shibuya, Shinjuku, Ikebukuro or another station further afield, you’ll need to check which N’EX trains will take you there (otherwise you’ll have to transfer). The timetable on the N’EX website shows you the exact time the train pulls into the station; if there’s no time listed, it doesn’t stop there.

Even if you can’t take advantage of some special ticket or pass, the Narita Express is still one of the most trouble-free ways of getting to the main JR stations in Tokyo, as you don’t have to fight for a seat, there’s lots of space for luggage and there’s no need to change trains. The regular price isn’t cheap though; it costs about ¥3,250 each way. You can buy tickets at the JR station and travel centers at Narita Airport. Also, if you plan on traveling beyond Tokyo, e.g. to Kyoto or Osaka, the same day or soon after, you could use a JR Pass (see below) to ride the N’EX.

You can also charter a helicopter for ¥32,780 or so per person. Not cheap, but certainly a unique airport transfer experience! It takes just 18 minutes from Narita to Tokyo by air.

Can I use a Japan Rail Pass (JR Pass) from Narita Airport to Tokyo?

Yes. However, given that it doesn’t cost that much to get into Tokyo, you should think carefully before you activate your JR Pass—especially if you plan to spend the first few days of your trip in the city. You might want to choose another option to get into Tokyo, and then activate the pass when you embark on a longer inter-city trip.

If you haven’t got a Japan Rail Pass yet, you can reserve your pass online. Not sure if you need one? Read our article on which JR pass to choose.

How far is Narita from Tokyo?

What is the fastest way to get to central Tokyo?

The fastest way to central Tokyo would be to opt for the Keisei Skyliner which can get you to Ueno Station in just 41 minutes.

What is the difference between Narita Station and the Narita Airport train stations?

About 8km, so make sure you don’t get off at Narita Station by mistake on your way back to the airport! Narita Station is not the one at the actual airport. Stay on the train until you reach the station for your terminal—Narita International Airport Terminal 1 Station or Terminal 2 Station (which serves both Terminal 2 and 3).

How do I get to Narita Airport from Tokyo?

On the way back, all of the same transport options apply. Simply reverse the route, check the times, and you’re good to go.

Which airport should I use to fly into Tokyo?

If it’s an option when you’re booking your flight to Tokyo, Haneda Airport is the one to choose, as it’s closer to the city and much snazzier too. However, flying into Narita Airport is often the only—or cheaper—option, and, as you can see, it’s well connected to Tokyo.

Is there a hotel inside Narita Airport?

The only accommodation directly connected to the airport is a capsule hotel called Nine Hours Narita Airport. This capsule hotel features a round the clock check-in system and is located in Terminal 2. The hotel provides basic toiletries and sleepwear.

For recommendations on hotels near Narita Airport, see our accommodation listings. And for more info on getting around once you’ve made it into the city, as well as other essential Tokyo basics, check out our eBook guide.

While we do our best to ensure everything is correct, information is subject to change. This post was originally published on July 30, 2012. Last update: June 6, 2022.
Written by: Greg Lane
Greg's Tokyo favorites are: Shinshu Osake Mura, Kiyosumi Teien Garden, The American Craft Beer Experience 2022
Filed under: Transport
Tags:
Sharing
Questions or comments about this article?
Start a thread on our community forum
Ask our local experts about Tokyo