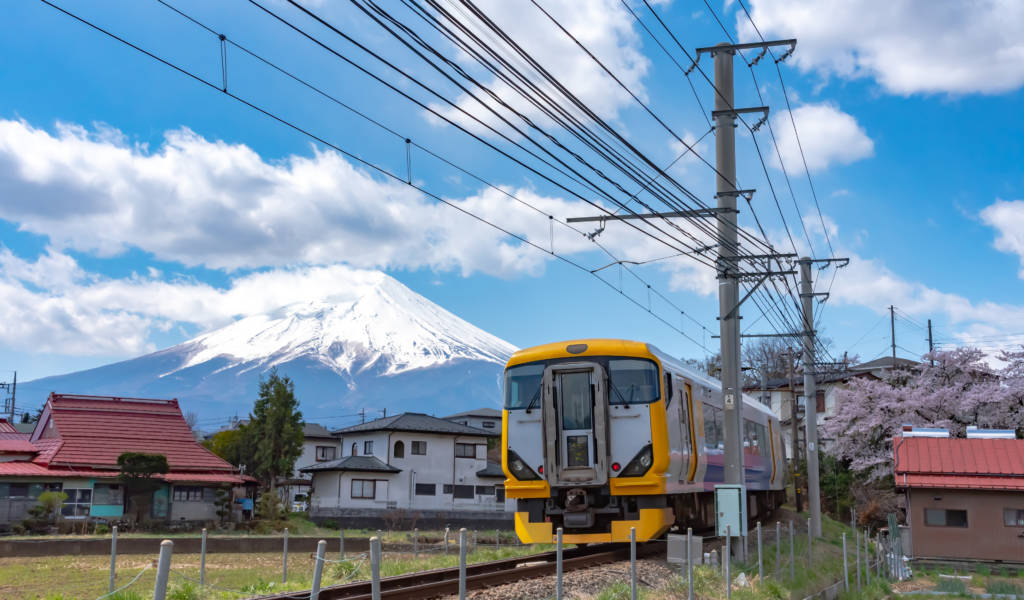 Tokyo to Mount Fuji: Getting There

So you want to see Mount Fuji, that 3,776-meter-high icon of Japan? It’s a volcano, but let’s not think too much about that. Depending on what it is you plan to do there (climbing to the summit or exploring the surrounding lakes, soaking in a hot spring or shopping), your choice of transport is going to differ. Here’s an overview of how you can get from Tokyo to Mount Fuji by train or bus, in or out of season.

Note: For reference, the distance from Tokyo Station to Kawaguchiko Station (the gateway to Mount Fuji) is roughly 112km—despite what you may have heard, Mount Fuji is not just down the road from Tokyo.

Easiest way of getting to Mount Fuji from Tokyo: Highway buses

Most visitors to the mountain seem to go for this option. The best bus depends on what time of year you’re traveling.

Outside the climbing season and for general visitors to Fuji-san, there are regular services that operate between Shinjuku/Shibuya/Tokyo and the broader Fuji area. Kawaguchiko Station, Fuji-Q Highland (the theme park for thrill-seekers), Fuji-San Station and Lake Yamanakako are the major get-off points. Where you alight depends on what it is you want to explore. Kawaguchiko and Yamanakako give you access to some of the lakes around Mount Fuji, which make for excellent walking and hot spring-ing spots.

A bus ticket from Tokyo Station to Kawaguchiko Station or Fuji-Q Highland will set you back about ¥2,000 (one way), and the journey takes two hours on average. If you’re going to Lake Yamanakako, you’re looking at closer to 2.5 hours and ¥2,100 yen each way. We recommend you look at the booking sites Willer Express and Kosoku Bus, as well as Highway-buses.jp, to compare ticket prices for the Tokyo to Fuji-san bus trip. There are several buses a day, with the bulk of departures in the morning.

From Kawaguchiko Station, you can hop onto a local bus and get up to the Fuji Subaru Line 5th Station (a popular tourist spot/lookout point, as well as the starting point for the main Mt Fuji hike), as long as the roads aren’t snowed under. It takes about 50 minutes and costs about ¥1,570 (or ¥2,300 for a return ticket). Buses leave once an hour, and you don’t need a reservation. Check out the schedule.

Pro tip: You can also book an all-inclusive sightseeing bus tour from Tokyo to Mount Fuji.

Special buses in the climbing season

In season (July to mid-September), climbers can take a direct bus from the Shinjuku Expressway Bus Terminal to the 5th Station (the Fuji Subaru Line one), which, in addition to being a tourist hotspot, is the starting point for the popular summer sunrise hike that follows the Yoshida Trail. Bus tickets cost about ¥2,950 one way, and the trip takes about 2.5 hours. You can book tickets on the Highway-buses.jp website.

Important: Due to safety concerns, climbs should only be attempted during Mount Fuji’s official climbing season. The mountain trails are off limits outside of the climbing season. In 2021, Mt Fuji has partly reopened to hikers.

Taking a train from Tokyo to Mount Fuji

If you aren’t so keen on a bus, you can take a train from Tokyo to Mount Fuji—but note that they are a bit more expensive than the buses.

Your year-round options are as follows:

Note that some trains on the Fujikyu Railway, including the Fuji Excursion, stop at Fuji-Q Highland too. Also note that if you are traveling on a JR Pass, your JR trains will be covered, but you will have to pay out of pocket for the Fujikyu Railway portion of the trip.

Another rail option is to take the JR Tokaido Line for Atami from Tokyo Station, then transfer to the JR Gotemba Line for Mishima at Kozu Station. The trip takes about two hours and the fare is ¥1,980. From Gotemba Station, you can catch a free shuttle bus to Gotemba Premium Outlets for some retail therapy, or take a local bus up to the Subashiri 5th Station (in climbing season).

It used to be the case that on weekends and public holidays in summer and fall, you could take advantage of a special Holiday Rapid Fujisan train direct from Shinjuku to Kawaguchiko. There was a similar Rapid Fujisan service on Fridays. However, these trains were retired with the March 2019 launch of a new direct train from Shinjuku to Kawaguchiko—the Fuji Excursion Limited Express train run by JR and the Fujikyu Railway.

The Fuji Excursion Limited Express train runs twice daily on weekday mornings (departing at 8:30am and 9:30am) and three times on weekend and holiday mornings (departing at 7:35am, 8:30am and 9:30am), with return trains departing Kawaguchiko Station in the afternoon (at 3:05pm and 5:38pm on weekdays and 3:05pm, 4pm and 5:38pm on weekends and holidays). The cost of a one-way journey is ¥4,130 with a reserved seat.

Between July and November, you can buy a two-day Mount Fuji 5th Station Pass, which gives you rail access from Otsuki to Kawaguchiko, as well as hop-on/off bus access up to the Subaru 5th Station, for ¥3,700 (plus tax) at Otsuki Station. This saves you around ¥700. There are a few other discount transport passes available—enquire at Otsuki Station. More details.

Another transport option is to rent a car and drive from Tokyo to Mount Fuji. Staying overnight? See our Mount Fuji accommodation guide.

Note:All information, including costs and travel times, is subject to change.