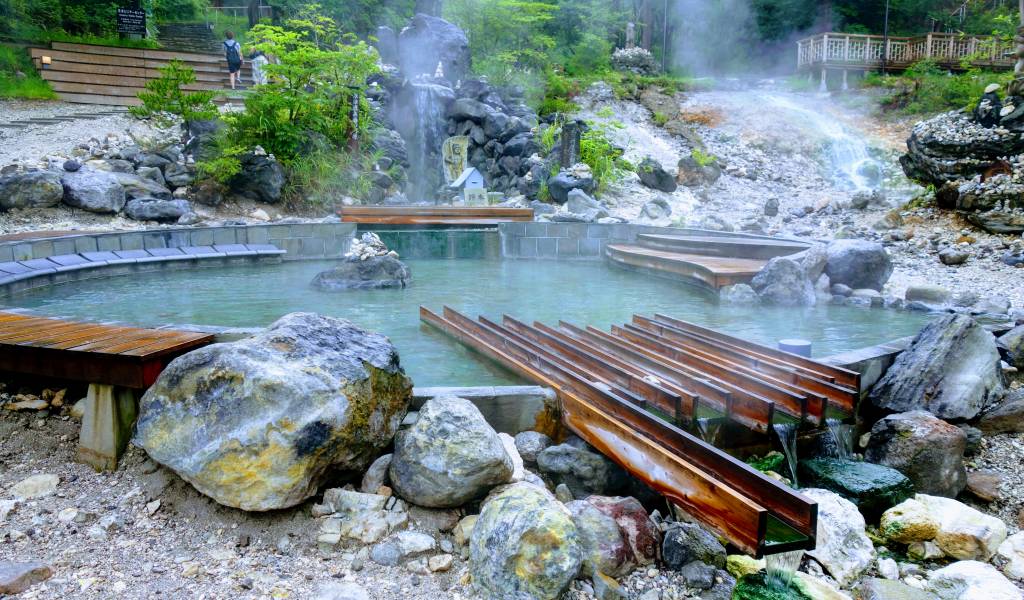 Japan has more hot springs than anywhere in the world, so it’s the perfect place to warm up this winter with a good soak. Lucky for you, there are plenty of onsen towns near Tokyo to dip your toes into!

Probably the only thing that makes winter in Japan bearable is the prospect of sinking into a hot, steaming onsen so relaxing you forget the 20 other naked people around you — if only temporarily. There are plenty of baths in Tokyo, but for a real escape head to one of the resorts to enjoy a mini-break. You can opt for a weekend getaway or make it a pit stop on a longer itinerary — either way, it’s one of the most integral winter experiences you can have in Japan.

These towns are far enough away to feel like a proper break, but close enough that you can be there and back in time for an early-ish night. Want to weigh your options with onsen further afield? Consider these five onsen worth traveling for. For those of you who are more excited to see monkeys bathing than getting in yourselves (or want to combine the two), have a look at our article on getting to the popular Jigokudani Snow Monkey Park in Nagano.

Side note for the nervous: Being publicly naked may not be your idea of relaxing, but believe us (as some of the most prudish of prudes), it is so, so worth it. As long as you follow the onsen protocol, and after a few stares, the other people will soon lose interest and you can carry on your merry way.

An easy bus ride from Tokyo, Kusatsu is one of the better-known spots among onsen lovers due to its unique, open-air cooling technique. Stroll through the streets in the evening to admire the yubatake: a giant chute of hot water running through the center of the town and supplying the many onsen nearby.

You can try super-hot pools for free throughout the town and pay a small fee for some of the cooled ones with facilities. Although Kusatsu works as a day trip, you definitely don’t want to to miss the lights at night, so make this one a weekend away. Don’t worry: Kusatsu can be done for ¥10,000, so it shouldn’t break the bank!

Getting there: Buses are a really convenient way to reach Kusatsu as they run direct from Shinjuku and Shibuya stations and are affordable too! They take 4 hours and cost between ¥1,500 and ¥3,600 each way through Kosoku or Willer. Have a quick look at our guide to Kusatsu for all the info.

Hakone is just an hour and a half from Tokyo and famed for its onsen with views of Mount Fuji, not to mention the pirate ship on the lake.

If you’re after a more fun take on an onsen, definitely check out Yunessun — a kind of onsen theme park with wine baths, tea baths, and more. For a more traditional approach, choose from the many ryokan (traditional Japanese inns) that open their doors to visitors, like Kohan-no-yu which looks out across Lake Ashi. If you have tattoos, head to Tenzan which has a beautiful rock-lined rotenburo (outdoor bath) and is more accepting than most (i.e., be discreet and you’ll be fine).

Hakone has plenty more than onsen to keep you entertained, with the aforementioned pirate ship plus art galleries, teahouses, steaming valleys, and other attractions.

Getting there: Best reached by train, there are plenty of combination deals and Hakone even has its own transport pass. It takes just under 2 hours from Shinjuku Station by train (with one transfer) and costs ¥1,220 each way on local trains or ¥80 minutes and ¥2,330 on the limited express Romance Car service. See our full Hakone transport guide for the best combo deals though!

Best known for the 300m staircase that leads up through the town, Ikaho is another of Gunma’s four famed onsen. The thermal waters here are a reddish brown thanks to iron presence and are believed to be good for poor circulation and fatigue.

Much like Kusatsu, you can actually see the source of the water here at the top of the steps, near the large public outdoor bath. There are two public baths in the town, and plenty of ryokan and hotels welcome visitors for between ¥410–¥1,500 a soak.

When you visit, be sure to make a short trip to nearby Mizusawa Temple, which is popular for the udon shops that line the route to its doors. The area is home to one of the three most famous types of udon in Japan, alongside Sanuki udon of Kagawa and Inaniwa udon of Akita.

Getting there: There are train options which are covered if you have a JR Pass (take the shinkansen to Takasaki and transfer to a local train to reach Shibukawa before hopping on a bus from there). Otherwise a JR highway bus from Shinjuku Station is most convenient, as they run frequently each day direct (some continue to Kusatsu). The trip costs around ¥2,600 each way and takes 2.5 hours.

Once a major seaside destination for Tokyoites, Atami has seen a decline in visitors over the decades, but this gives it a special kind of yesteryear charm. There are unusual salt-water onsen with incredible sea views, and plenty of traditional inns dating back way past Japan’s 1980s “bubble era.”

If you’re looking for a special romantic option, the Chikurinan Mizuno Resort, which overlooks the bay, has couple’s rotenburo (outdoor bath, requires reservation) in their forested grounds. While you’re there, you can visit the fake Atami Castle and even see the sex museum — it’s an unusual spot for sure! The area is well known for fishing, so you can also enjoy deliciously fresh seafood on your visit.

Getting there: By train it takes just under 2 hours from Tokyo Station direct, and costs ¥1,980 each way.

Tochigi prefecture (about 2 hrs from Tokyo)
Direct train from Shinjuku

Perfect if you’re looking to combine your trip with a visit to Nikkō, Kinugawa is a less famous but still popular option with some beautiful scenery. Despite having been through a bit of a boom and decline, recently abandoned hotels have been removed and the area is enjoying a new lease of life. There are new nature trails and foot baths near the river, as well as parks.

The water is mild and clear and has been soaked in since the Edo period — give it a try at the public or private baths dotted throughout the town. There is a small theme park recreating feudal Japan to visit between soaks, as well as a park featuring world landscapes in miniature — what more could you want from a weekend?

If you want to leave behind the more built-up style of the town, visit one of the more rural spots like Okukinu Onsen (a collection of five onsen which require a bus from town and a hike to visit) or the small town of Yunishigawa (one hour by bus from Kinugawa), which is home to onsen as well as a snow house festival.

Getting there: The journey from Shinjuku takes 2 hours and costs ¥4,080, as it includes a limited express service. The trains are partially covered by the JR Pass, but as they are jointly run by the Tobu Line and JR, additional fees must be paid. These trains require reservations and run frequently. Alternatively, if you’re using the JR Tokyo Wide or another JR East regional rail pass, the trip is covered entirely. See our guide to getting to Nikkō for more details.

While we do our best to ensure it’s correct, information is subject to change. Article first published December 2017. Last updated December 2022.