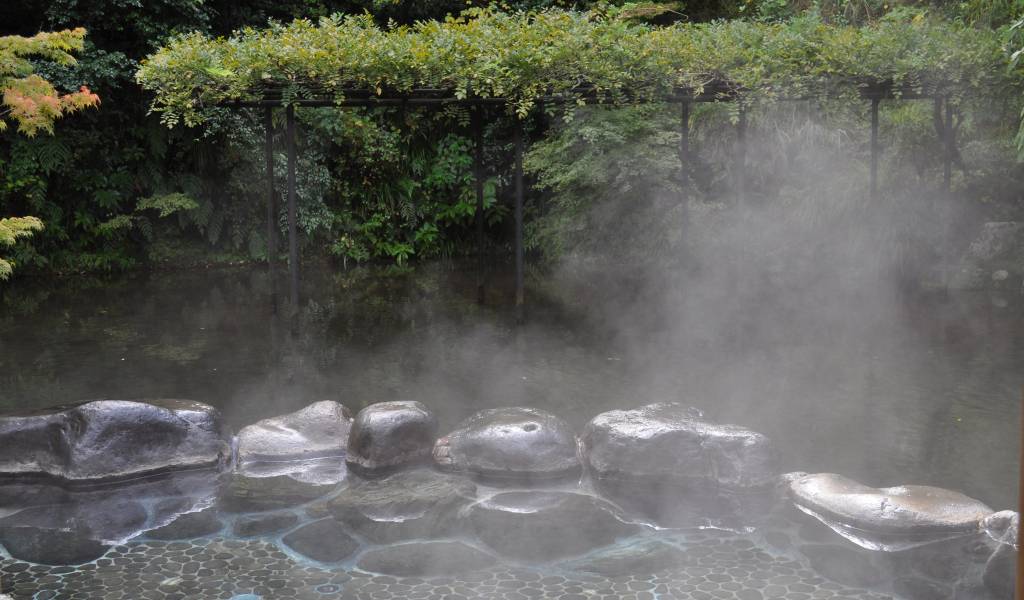 Japan has a bathing culture like wow. Going to onsen, or hot springs, is a rite of passage for every youngster, and kids are taught from an early age how to do public bathing appropriately, often by their grandparents. Getting starkers as a family is as natural in Japan as hopping into the shower. Believe it.

Given that Japan is basically built on a string of volcanoes, it’s no shock that onsen are the pinnacle of bathing culture. Not only do onsen heat you up and clean you, but the waters are said to have many restorative powers due to the minerals in them. Claims about everything from alleviating diabetes and cancer to healing problem skin and backaches run rampant.

Sento used to be everywhere, before baths came standard in housing. Still people use them, perhaps for a more leisurely soak than a shared bathroom at home would allow. They also function as community hubs. Importantly, sento tend to be pretty cheap, costing only a few hundred yen, whereas onsen tend to cost more.

It may seem a daunting endeavour, but once you know a few basics, onsen-relaxation is a very manageabe and even enjoyable adventure.

In the locker room or changing room, you’re to take all your gear off before entering the bath area. No underwear, no robes, no towels, just you and all your glory in front of, well, everyone. You can take your modesty towel only with you into the bath area. But it’s okay — everyone else is nekkid too.

Once you’re in the washing area, grab a stool and a bucket (if they’re not already at each wash station) and pull up to a tap. Usually, there will be several washing stations available, each with a set of taps, a showerhead and hopefully soaps and shampoos. Sit down and scrub-a-dub. When you think you’re done, scrub some more. If you think it’s embarassing to be this thorough in public, keep in mind that everyone shares the water – the only judgement here is not washing enough. Rinse really thoroughly — no trace of soap should be left. Rinse off your stool and bucket before returning them, of leaving them neatly in front of your station.

Spanking clean in your birthday suit, you can now head to the bath. Dip a toe in to check if you can manage it — doing a hot!hot!hot! dance while hadaka (naked) may not be your best look. Ease yourself in. Your towel should not go in the water — keep it around your neck or folded and placed on top of your head. Long hair should be kept up and should also not be dangling the water.

No swimming, floating, or splish splashing. Get it together, man!

Tattoos: The tough one

Tattoos are a tough one. Many places have rules that prohibit tattoos, so you may have to either cover it up with a bandage if it’s small enough or keep your booty to yourself, alas. There are a few places that allow them, however and things are gradually getting more relaxed.

Now you know what to do, and how to do it, here are some of the best value for money onsen in Tokyo:

This pretty onsen has rotemburo, or open-air baths, so you can really be at one with nature. Japanese gardens, fragrant cedar, bathing among rocks and trees — the whole shebang. There are multiple baths and saunas to choose from, including a special hot stone sauna, which does cost extra but the price includes a towel and pajama rental (because you will sweat!). The have body soap and shampoo and conditioner as well as towels to rent.

Believed to be good for: neuralgia, rheumatism, and poor circulation.

Not quite as lovely as Saya, this sento is cheaper and it actually uses real spring water. It has a regular bath, whirlpool bath with massage jets, and an herbal rotemburo. There is a sauna (but this costs ¥600 extra) and the outdoor baths have no roof, allowing you to feel completely out in the open, while still being hidden thanks to their depths.

In Aoyama, this spot is a stylish and cheap sento (not an onsen). They’ve got regular baths and whirlpool tubs, as well as electric baths, which feel stimulating or else like getting shocked hundreds of times while you’re completely unprotected. They also have something called nanobubbles, whatever those are.

This Showa-era sento is super convenient, just minutes from Nakano Station, and popular with students. No rotemburo — just big tubs, and a medicated bath (with rotating herbs) three times a week. They also encourage kids to come and up to two preschool-aged kids per adult can enter free. On a practical level, there is a coin laundry here too, so if you’re travelling you can wash yourself and your clothes at the same time.

In the posh Azabu neighborhood you can find this little bathhouse, in operation since 1913! The black “radium water” is minimally filtered, retaining volcanic ash and peat, and dubbed “black beauty” water. There is a sauna and a ticket costs ¥1,000 for two hours, including onsen use and large towel rental. They don’t have free soap or shampoo, but do sell a small towel and soap set for ¥100, while a large towel is ¥200.

This onsen isa little more expensive but it’s spacious and beautiful, with a wide variety of baths (plus towel rental is included). The rosta includes a foot bath, vibra-bath, jet bath, and outdoor baths, as well as three types of sauna where you can let it hang out in style. There are savings to be made, with ¥1,100 entry before 12pm on a weekday or after 8.30pm on weekends. It drops down to ¥880 if you go after 8.30pm on weekdays or just pop in for an hour on a weekday. The cheapest option is ¥550 if you go before 12pm on weekends and holidays. These cheaper rates don’t include towel rental though, so keep that in mind!

Believed to be good for: anti-aging, melting extra subcutaneous fat, and moisturizing skin.

Nu Land boasts eight kinds of baths, but one of them is a sauna that costs extra so let’s call it seven. Those seven include a micro-vibra bath, a jet bath, and a black water bath as well as some outdoor baths, plus there’s a TV room, resting room, and a nice garden. There are different prices for bathing only, bathing plus sauna, and those two plus use of all facilities, so be sure to check which you would like! As a bonus, you can opt for whole-building use, which includes a karaoke and tv room. An empty-handed set for bathing with towel rental is available for ¥600

Believed to be good for: stimulating metabolism and easing digestive system woes.

A hop, skip and a jump from Nakameguro Station and the cherry-blossom mecca that is the canal, Kohmeisen is an old-school neighborhood sento, complete with murals, with hot and cold indoor baths, an outdoor bath, and a sauna. There’s a coin laundry downstairs, if you want to double up on your wash. This is a fairly small sento, and can get crowded! There are plenty of cafes and restaurants nearby, though, so you could easily wait. (Remember to bring your own soap and towel!)

Well, what are you waiting for? Gird your loins and get your onsen on.

This article was originally published on December 10th, 2014 and was last updated in October 2022.