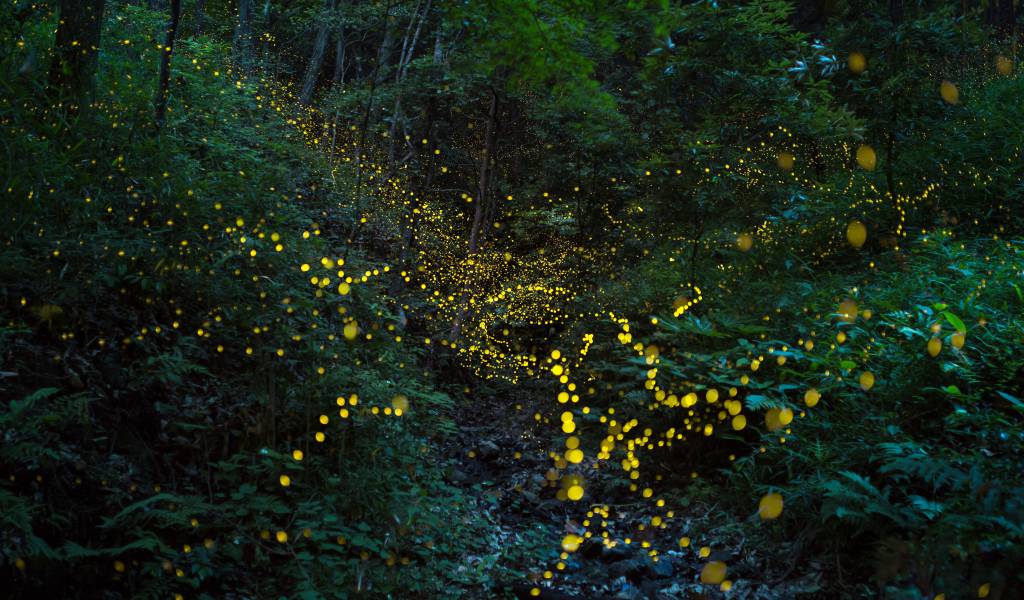 Though it’s still a bit too early for the major fireworks festivals, there are opportunities to see other lights in the sky: fireflies. Read on for recommendations of Tokyo firefly events to experience this beautiful natural phenomenon.

Since it’s mating season for fireflies, the little bugs light the night sky aglow, looking almost magical in the process—like tiny floating lanterns. Japan’s two most common types of firefly are the genji-botaru and heike-botaru, which, for some reason, were named after rival clans during the Heian period. Perhaps it has something to do with how the phenomenon of fireflies emitting light is also known as hotaru gassen, or “battle of the fireflies.”

Tokyo being the urban sprawl that it is, there are already lots of neon lights to make the nights bright, and the city doesn’t have all that much nature compared to other parts of Japan. That means that there are better places in Japan to see fireflies—but fortunately, Tokyo’s still got some decent firefly events. Time to whip out your best camera to capture the fireflies in all their glory!

A few stops away from downtown Tokyo with direct access to Shibuya, Setagaya ward is a popular neighborhood for young families. This event is held yearly and is mostly for kids. During the day visitors can enjoy looking at flower exhibits and purchase some of their own while from sunset onwards is when the real fun begins. Expect to see about 3,000 fireflies light up the walking course plotted out at the festival. There’s music, dancing, and tons of Japanese food stalls that line the streets.

Yuyake Koyake Fureai no Sato is a camping ground and recreational facility in Hachioji, also in suburban Tokyo, and it’s one of the closest things you can get to experiencing countryside life in Tokyo. It isn’t located immediately close to a train station, so you’ll have to get off at JR or Keio Line’s Takao Station, board a Nishi-Tokyo bus bound for Jimba Kogen-Shita, and get off at the Yuyake Koyake stop 30 minutes later.

Although you normally have to pay a few hundred yen for admission, entrance is free during their Tokyo firefly nights.

Thanks to the swanky Hotel Chinzanso’s beautiful Japanese garden, you don’t have to leave central Tokyo to see fireflies. The hotel garden is open only to paying customers (hotel guests and/or restaurant customers). If you want to add a touch of class and maybe even romance to your firefly-viewing experience, the hotel has accommodation packages and special menu items to celebrate firefly season—none of which come cheap. There are, of course, more affordable options, such as ordering tea and cake from their cafe.

Swanky option: If you have a bit of money to burn and/or a particularly sweet memory to make, the Hotel Chinzanso offers a buffet ( ¥9,800–¥10,500) to round off the firefly nights.

Where: 2-10-8 Sekiguchi, Bunkyo (near Edogawabashi Station)
When: May 5-July 3, 2022, evening
Admission: Free for paying customers (including restaurant customers)

During summer a lot of families take to nearby nature spots like rivers, lakes, or mountains. Hirai river has clear waters and is a popular spot for firefly spotting. While this isn’t an official event, it still might be worth checking out if you ever find yourself outside central Tokyo. For the best firefly spot, it has been said that fireflies tend to gather around the area surrounding the Iwai bus stop. Since there’s no parking, we recommend using public transportation from Musashi-Itsukaichi station. Prepare to go sometime after dinner at about 7:00 or 8:00pm to get the full experience.

Sankeien Garden is in Yokohama, but it’s not that far from Tokyo. For its annual “firefly evenings” event, the garden will be open until 9pm, but the organizers say that the best time to see the fireflies is from 7:30pm-9:00pm. They also caution that on rainy nights, the fireflies might take cover behind leaves, so it will be difficult to see the little buggers.

15 minutes from Shibuya along the Keio Line is Kugayama, where a fairly small but fun firefly festival is held on one weekend in June. The Kugayama Festival offers snacks and drinks along the area’s main shopping street, but the real attraction is the release of thousands of fireflies. That said, this isn’t the place to see clouds of little airborne lights. The banks of the Kanda and Tamagawa Josui rivers, where the fireflies gather, are fairly leafy, so you may need to do some peering into the foliage to spot the little beasties.

This post was originally published in June, 2015, and last updated in June, 2022 by Heidi Sarol. While we try to ensure that all information is correct, dates and other details may vary.

Fussa Hachioji Mejiro Shibuya Yokohama
Written by: Tiffany
Filed under: Outdoors and Nature | Things to do
Tags:
Sharing
Questions or comments about this article?
Start a thread on our community forum
Ask our local experts about Tokyo