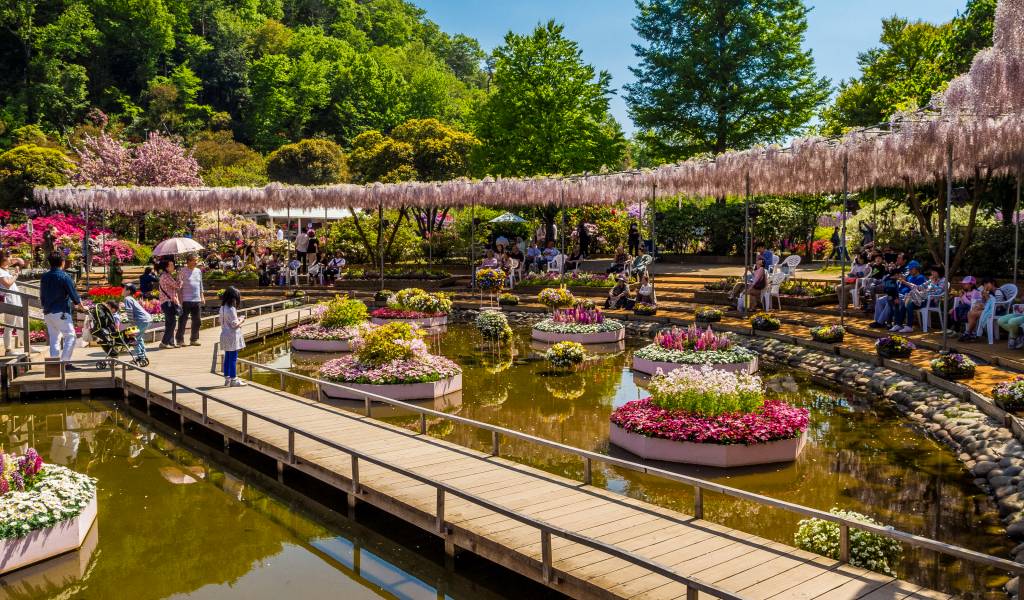 Ashikaga City (or Ashikaga-shi as is its proper name in Japanese) in Tochigi Prefecture is one of those cities that exists out of most people’s realm of knowledge: it’s as if the Japanese want to keep it all to themselves! In all fairness, the local authorities of the relatively small town (~150,000 people) 111 km from Tokyo have tried their best to promote its unique sights—the problem is that, like most things in Japan, the ratio of available information is 90/10 in favor of the Japanese language, which makes it is absent from most tour guides.

And it’s really a shame for several reasons. 1) It’s accessible by all kinds of means, from the Tohoku Shinkansen for those carrying JR Passes, to local trains costing less than 1,000 yen. 2) Getting there from Tokyo takes next to nothing—under 45 minutes with the Yamabiko or the Nasuno Shinkansen or a little over 1.5 hours if you go local (as the old maxim goes: fast, good and cheap—pick two). 3) At least two of the city’s features can’t be found anywhere else in Japan: the Ashikaga Flower Park and the Ashikaga School, the first academic institution in the country.

First the flower park: it isn’t very old (it opened in 1968) but it is big (20.3 acres) and it features over a dozen of different flowers that blossom throughout different seasons. The park’s authorities have created 8 different “themes” they call “stories” that cover the whole year (early January-late February, early March-mid April, mid-April-mid-May, mid-May-early June, early June-early July, early July-late September, early October-late November, end of October-late January). And even though they are all extremely beautiful, the best seasons are the 3rd (mid-April to mid-May) and the last (end of October to late January). The first because of the nationally famous wisterias and the second because of the LED illuminations.

The Japanese have a special fondness for wisterias—they have been featured in their literature since the times of the “Manyoshu” collection of poems that go back to the 8th century. The six different species at the Ashikaga flower park are the country’s oldest and biggest: one of them is over 100 years old and its trellis covers an area of 1000 sq. meters (10763 sq. feet) while others, in various colors and shapes account for a big part of the park’s beauty and fame. And as you’d expect in a country obsessed with light, they are the ones mostly illuminated during the winter period; the sight is simply stunning!

For those who want something more substantial than pictures—or who have maxed-out their SD cards (if you’re into nature, you can easily fill up an 8 GB one here), there are two gift shops on the premises. The biggest one is in the park’s entrance/exit and the other inside the park; as often happens, they involve everything wisteria-related and even several things that aren’t but they could be (purple teddy bears for example—the purple wisteria or “murasaki fuji” is the most famous). Also, if you’d care to start your own flower garden there is at least one big (actually huge) gardening shop; interestingly enough it doesn’t sell wisteria seeds.

As for the other notable sight, the Ashikaga Gakko (i.e. school) you’ll need to move using local transportation: there is a train line called Ryomo which connects the two spots, from the Tomita Station closest to the flower park to the Ashikaga Station that is closer to the school. In both cases you’ll need to walk for about ten minutes but the actual train ride is only 6 minutes and it costs only 200 yen.

As mentioned above, the Ashikaga Gakko was Japan’s first organized school: a specialized college of sorts founded (allegedly) in the ninth century but resurrected in the early 1400s by the man considered its true founder, Uesugi Norizane. He was a local official coming from the prestigious Uesugi samurai clan and indirectly serving the Ashikaga shoguns who governed Japan from 1338 to 1573. Like most nobles, Norizane believed in classical (i.e. Chinese) education and he helped make the school Japan’s most prominent place to study the works of Confucius, Chinese medicine, military, science, etc. The school’s library still contains thousands of volumes, some extinct even in China.

Unless you’re a student of classic Chinese, the above probably won’t mean much. What will though (and it is worth the 420 yen entrance fee) is the beautiful buildings and the gardens. Those who haven’t been to Kyoto can find here a good sample of what Japanese architecture and garden landscaping meant back in the Middle Ages. Furthermore the buildings are open to go in and explore, and there are few things in the world more peaceful than the sitting in a Japanese veranda and watching a perfect garden with a small pond. (If you are in the mood for games, you can try playing with the tilting vessel, an illustration of one of Confucius principles where a bucket is suspended from two chains and needs to be filled with exactly 80% of its capacity in water to come to perfect balance—this, BTW is where the Japanese expression “hara hachibu” or “eat until you’re 80% full” comes from.)

There are other things to do in Ashikaga-shi: the area was famous for its production of fabrics (and particularly silk) from the 17th century onwards and there are quite a few spots where you can see old machinery from that industry still in action. Also it was (and still is) famous for its soba noodles so don’t neglect to sample them. It is a great day trip from Tokyo, it won’t cost much and you’ll have seen something that most tourists don’t: there’s more to Tochigi than Nikko, and Ashikaga is the proof.

Getting there: From Tokyo Station via JR’s Utsunomiya and Shonan-Shinjuku Lines. Or by Tohoku Shinkansen to Oyama Station then switch to the Ryomo Line and get off at Tomita Station (for the flower park). From Asakusa via the Tobu Isesaki Line to Ashikagashi Station and from there, you take the local shuttle bus to the flower park.

Ashikaga Flower Park
300-1,500 yen
Ashikaga-shi, Tochigi
Written by: Grigoris Miliaresis
Filed under: Things to do
Tags:
Sharing
Questions or comments about this article?
Start a thread on our community forum
Ask our local experts about Tokyo