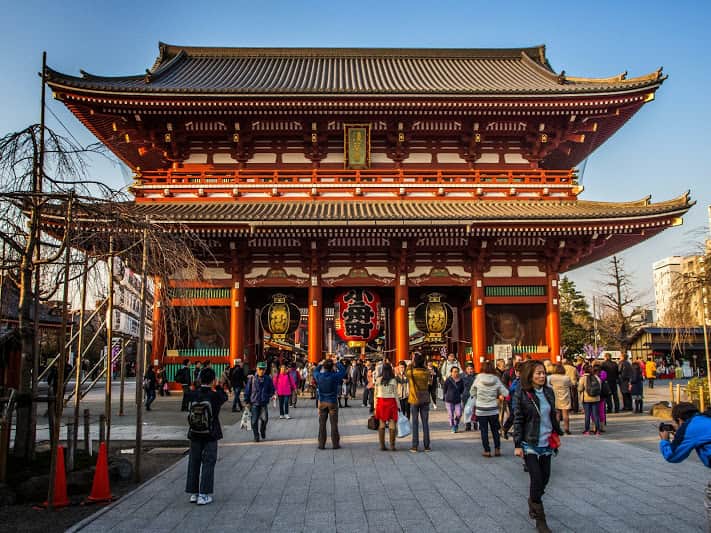 Getting from Narita to Asakusa

Asakusa is one of Tokyo’s older districts. It’s characterized by narrow alleyways packed with noodle shops, shopping streets, and a grand temple—Sensoji—all of which are flanked by modern department stores. The richly cultured area is a must-visit for anyone coming to Tokyo, and is also an accommodation hub. If you’re looking to get from Narita to Asakusa, these are your top transport options.

Quick comparison of transport options from Narita Airport to Ueno

The best ways to get from Narita to Asakusa

Narita Airport is about 62km from Asakusa Station. Here’s how to cover the distance.

Fastest (and generally easiest) transfer from Narita Airport to Asakusa

Our recommendation is to hop onto the Keisei Skyaccess train (not the more expensive Skyliner) from either of the terminal stations at Narita Airport, and cruise right over to Asakusa Station. The trip takes under an hour and costs just ¥1,310—and no transfers are required.

Can I use a JR Pass to get to Asakusa from Narita?

You cannot use a JR Pass to get from Narita Airport to Asakusa directly—you would need to take the JR Narita Express train to one of the stations on the JR Yamanote Line, e.g. Tokyo Station, and then take the Yamanote Line to Ueno Station, where you would transfer to the Ginza Line (purchasing a separate ticket).

Alternatively, you could transfer to the JR Chuo-Sobu Line at Shinjuku Station and take it to Asakusabashi Station, which is connected to the Toei Asakusa Line, and about 1.5km away from Asakusa Station on foot.

Pro tip: Keen to get straight from Narita to Sensoji Temple, arguably Asakusa’s biggest drawcard? The temple is at most a few minutes’ walk from Asakusa Station.

Cheapest way of getting from Narita to Asakusa

If you’re set on saving about ¥200, there is a slightly cheaper option than the Keisei Access Express mentioned above.

You can take the Keisei Main Line train to Aoto Station, then transfer to the Keisei Oshiage Line for a 12-minute ride over to Asakusa Station. You’re looking at around 80-90 minutes of total travel time. Our advice? Go for the Keisei Access Express train instead—it’s much easier.

Pro tip: Read our guide to taking the Keisei Line from Narita.

If you’ve got heavy bags and you don’t want to haul them through Asakusa Station, then an airport shuttle like this taxi service for about ¥18,402 is the higher cost but lowest stress option.

Note: Asakusa is in an area called Taito-ku, which is in the Tokyo 23 ward area you’ll see on the drop-off list.

Can I take a regular taxi from Narita to Asakusa?

Yes, you can take a regular taxi from Narita Airport to Asakusa, but it will cost you. A lot. Probably more than ¥20,000. So it’s not really a cheapo option.

Looking for other transfer options or more details? Head over to our mega guide on getting from Narita Airport to Tokyo. You might also want to see what there is to do in Asakusa for free or for cheap.

Looking for the best way to get from Asakusa to Narita Airport? Your options are virtually identical—simply reverse the route.

While we do our best to ensure it’s correct, information is subject to change. Post first published in December, 2016. Last updated in May, 2022 by Heidi Sarol.