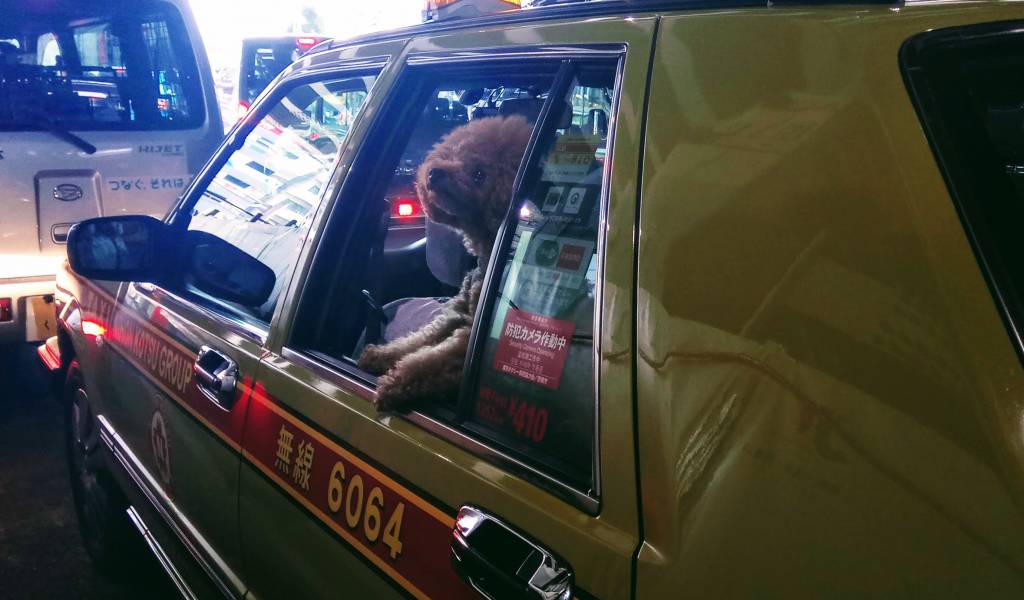 Catching a Taxi in Tokyo: The Uncheapo Way to Get Around?

Ok, we know what you are thinking, that taxis are not the cheapo way. And that is true, seeing as taxis can be quite expensive in Japan—especially considering that there are plenty of cheaper public transport alternatives. However, if you are caught somewhere after the last train (usually around 1am or earlier), or in an area that does not enjoy wide public transport coverage, then taking a taxi in Tokyo (or elsewhere in the country) might save you from a lengthy walk or hauling around whatever baggage you have.

How to catch a taxi in Japan: The basics

Most receptions at a hotel or business in Japan will gladly call a taxi for you if you ask them by saying “takushii o yonde kudasai“. Expect to be charged a small fee called “sougeidai” which literally means “pick up fee” that can cost about ¥410. Still, it beats having to hunt one down for yourself in a pinch.

If you are out and about, the best way to find a taxi would be to head to one of the many taxi stands around stations and major sightseeing spots, where taxis line up to help you on your way. Although if you’re in central Tokyo, you can normally flag a taxi down within a few minutes (and often seconds) just by standing on any moderately busy road.

You can see whether a taxi is vacant if the sign on the dashboard is red and shows 空車 (“kuusha” meaning “empty car”). When the taxi is occupied, the sign will be green and show 賃走 (“chinso“). An easy way to remember this is to think: red makes a taxi stop, and green means it’s going (away from you).

When you board or exit the taxi, the left door is opened and closed remotely by the driver so you do not have to open it yourself.

There are also a variety of ride—sharing apps in Japan now, and notably the infamous Uber isn’t really very popular here.

Japan Taxi uses GPS to find a taxi company near you to call for one of their taxis. You can register payment methods using the Japan Taxi Wallet and pay for your ride using a credit card, DPay (Docomo), Apple Pay, and Google Pay. Note that the Apple pay option may not work with foreign credit cards. If all else fails cash will do just fine.

Even though the app has an English version, it’s still a has a few non Japanese gotchas—you may not be able to register without a Japanese mobile number (as of June 2022 this is the case). Currently the app is trying to migrate its userbase to Go, another taxi booking app made by the same developer.

Go is a newer taxi booking app that was made by combining Japan Taxi and Mov. This app is arguably more popular with over 300,000 downloads as compared to Japan Taxi. Note that the app is only useable in Japanese but this may change in the future. Similar to Japan taxi, it requires a Japanese mobile phone number (for SMS verification).

An advantage of using this app is that if you want to reserve a taxi 15 mins before leaving, they have an option called AI Reservation or AI予約. Upon sign up you’ll be rewarded with a ¥500 coupon. Additionally, Go offers two kinds of estimates while you book, one for payment after arriving at your destination (a normal metered fare) and another for paying before you ride. For payment schemes they have Go Pay (which you can use by adding your credit card details or DPay credentials), cash, and credit cards.

DiDi is a Chinese ride sharing app with some coverage in Japan. It scaled back coverage in 2020, but you can still use it in most major locations like Tokyo, Kyoto and Osaka. You can use some parts of their app English unlike the other taxi apps previously mentioned.

On the app there are features that allow you to choose which taxi company you want to hire, what time you want to get picked up, and if you want to opt for DiDi Special (their alternative to Uber Black). For payment DiDi accepts Paypay, credit cards, and cash.

The app has taken many countries by storm, except Japan—where it only operates for hailing a taxi in Tokyo. The reason for this is quite simple: Uber thrives in countries where the taxi industry is not well managed (where difficulties such as hailing a taxi exist), but Japan’s taxis are far from that.

So is Uber worth using in Japan at all then? Yes, it is! Even though Uber’s taxi fleet in Tokyo is small, the driver often speaks decent English, which makes communication that much easier. There’s also a small amount of Uber Black cars available which like in other countries, can be a bit pricier. Uber X isn’t available in Japan (same goes for UberX Share).

Taking a taxi in Tokyo: How much will it cost?

Fares vary depending on where you are; taxis in Tokyo are a little more expensive than their counterparts in rural areas, but in general the base fare for the first 1.052km will range between ¥380 and ¥410. After that, the fare increases by ¥80 every 237m, plus during waiting time—that’s when the taxi stands still due to traffic or if you ask them to wait. While most apps will have a general estimate of how much the ride will cost even before hopping in, you can get a general estimate here.

When taking a taxi between 22:00 and 5:00, they will generally charge an additional 20% as a surcharge. Another surcharge may also be incurred when they have to take a tolled expressway.

Some taxis offer preset routes between sightseeing spots or between major stations and hotels to the airport, which often have a discounted fare or even a pre-determined fare. Using these taxis might just be a great alternative to taking a shuttle bus or using public transport.

Communicating With A Japanese Taxi Driver

Once you hop in your taxi in Tokyo, the conversation with your driver should be fairly simple—if you speak a little Japanese. But for those less fluent, the situation is improving as a lot of taxis are much better equipped to handle non—Japanese speaker thanks to the run—up to the 2020 Olympics. A good sign of international language (and modern payment method) compatibility is the new London Black cab inspired taxis (pictured above).

The best thing to do in advance is to have the business card or address of the place you would like to go to written down, so the driver can just copy it into his navigation system. When giving him the address, simply say “Koko made onegai shimasu” meaning “Please take me to this address.”

When you see your destination and want to get out, you can tell the driver “Koko de oroshite kudasai” (“I would like to get out here, please”) or “Koko de ii desu” (“Here is fine”).

Finally, when it’s time to pay, you can consult the meter for your fare. Cash payment in smaller bills is preferred, as giving change for a 10,000-yen bill can be a hassle. In most major urban areas taxis now accept credit cards and payment apps like apple pay and google pay. If you’re in the countryside and only have large bills or a credit card on you, it’s best to notify the driver before you get in. You can also ask for a receipt by asking “Ryoshuusho onegaishimasu.” Lastly, do not forget to say “Arigatou gozaimasu” to thank the driver for your safe trip to your destination.

Is Uber cheaper than taking a taxi in Tokyo?

When it comes to saving some yen, both options are generally priced the same. Uber in Japan works with major taxi companies to offer rides. Though having said that, Uber in Tokyo does have two key advantages. Firstly, the transaction is cashless, so you do not have to carry too much money around all the time. Next, Uber does not charge extra between 22:00 and 5:00, which makes them slightly cheaper than general taxis during these hours. Lastly, with Uber there’s an option to share arrival times as well as GPS tracking which can come in handy for late night rides.

Are taxis safe in Tokyo?

Generally taxis in Tokyo are quite safe. Although unlicensed taxis are rare, you can recognize a licensed one by their green license plates, as regular cars have white and yellow plates instead.

Written by: Bjorn
Filed under: Transport
Tags:
Sharing
Questions or comments about this article?
Start a thread on our community forum
Ask our local experts about Tokyo