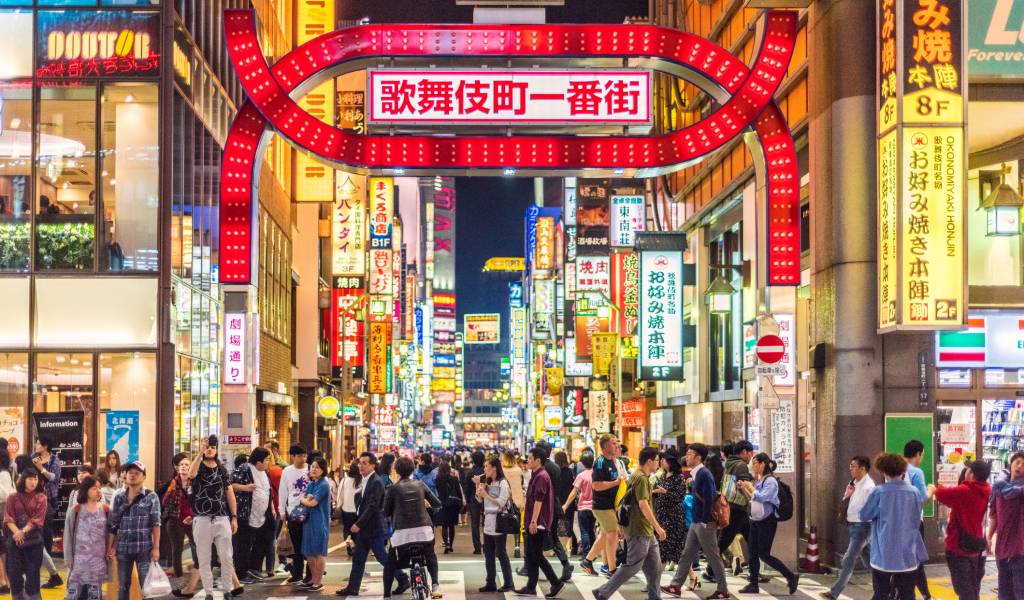 9 Things to Do in Kabukicho

Kabukichō is the biggest red-light district in Tokyo, where you can “buy” girls on an iPad, see Godzilla, or spend the night in a love hotel, so embrace the seediness and head on in… Whether you’re keen to try out the dodgier side of Tokyo’s nightlife or just want to explore the streets, there are plenty of things to do in Kabukicho. Any place that has Godzilla as an ambassador has to be worth checking out!

What is Kabukichō famous for?

Kabukichō famously has something for everyone (make of that what you will) but also has some famous attractions, like Golden Gai. The entertainment district is filled with neon lights, hostess and host clubs, restaurants, and pachinko parlors as well as touts and hustlers — so you do need to keep your wits about you.

Recently, Kabukichō featured prominently in the TV drama Tokyo Vice. Both Golden Gai and the batting cages (mentioned below) appear in the show. Read our interview with Jake Adelstein — author of the memoir, Tokyo Vice: An American Reporter on the Police Beat in Japan that inspired the show — about Kabukichō in its most debauched heyday. Seen the show? Here’s what we think it got right about Tokyo (and what it didn’t).

One place you won’t see mentioned in this article is the now infamous Robot Restaurant, which closed during the pandemic. We have a suspicion it will be back, though, considering it was rumored to have cost US$1 million to build. So you may still have a chance to see giant robots ridden by girls in provocative outfits set to very loud music.

Kabukichō is a neighborhood in Shinjuku’s east side. From Shinjuku Station, take the east exit and walk north to Yasukuni-dōri, the main east–west drag. Cross Yasukuni-dōri and enter Kabukichō through the neon red torii gate — a riff on a traditional shrine gate.

So is Kabukichō safe to visit?

The short answer is, generally, yes. All kinds of sketchy things go on here but if you aren’t looking for trouble it shouldn’t come looking for you. It’s generally safer than it used to be, and the appearance in recent years of many hotels targeting foreign tourists means it is now totally normal to see families wandering the streets — at least before the pandemic.

That said, the general rule is that if someone is outside trying to get you to come inside — don’t go. And if they name a price, expect to pay triple that (at least). Charges appear from no where, doors are blocked off, and your wallet will be considerably lighter whether you like it or not — so stick to regular bars unless you are serious and know what to expect. (And just to clarify, because Kabukichō makes things seem very grey, prostitution is illegal in Japan)

Male tourists are the prime targets of touts, so keep walking and enjoy a night in the liveliest part of Tokyo! Solo female tourists, meanwhile, might get offered a job.

Now, with no further ado, here are our picks for the 10 best things to do in Kabukicho.

Go for a drink (or many) at Golden Gai

Golden Gai is one of the most popular drinking spots in Kabukichō, though it has a markedly different vibe from the red light district. The only fees you have to worry about here are the cover charges (which range from 0 to ¥1,000) so you can rest easy.

Some favorites include Kenzo’s Bar (super-friendly) and Hair of the Dog, which is a rock bar with no seating charge that plays constant concert DVDs at request. The bars all have their own style and atmosphere, making a bar crawl a way more interesting prospect than your usual experience! For more suggestions of where to drink in Golden Gai check out our complete guide.

Charges are clearly marked on doors (along with some that have signs saying Japanese only — which is more about keeping spots for regulars than rudeness) and you can peek in to see if it tickles your fancy!

Pro tip: Golden Gai has become enormously popular of late, so you might want to enlist the help of a local guide to show you the best drinking spots.

Also Golden Gai is hardly the only yokochō (eating and drinking alleyways) in Tokyo; click here for more recommendations of atmospheric alleyways in which to knock back beers.

Get running from Godzilla

The official local ambassador, the giant Godzilla is now a permanent feature and on occasion will light up and roar, which never ceases to be entertaining. He can be spotted from afar and makes a great meeting place (way cooler than Hachikō) as he sits right in the middle of Kabukicho.

He is actually part of Gracery Hotel and you can book rooms with a view of his face, or take a tour up to the roof to see him close up!

The Toho Cinema (same building as the hotel) is also a great place to see movies either dubbed or subtitled as they have a great selection — perfect for a rainy day. 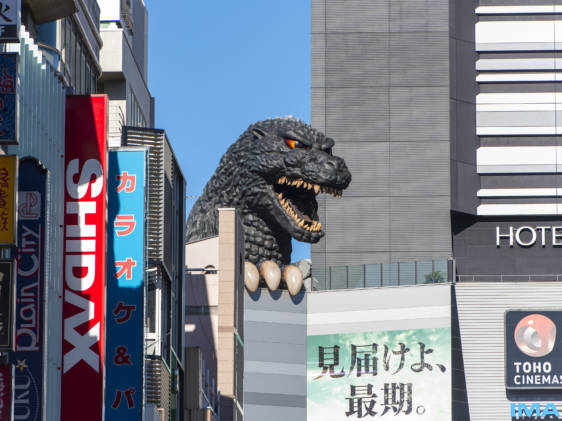 Kabukicho has not one but two batting centers (Oslo Batting Center is the other), proving that innocent fun is among the neighborhood’s many (many) offerings. Shinjuku Batting Center definitely looks its age — it’s been around since the 1970s. It’s also one of the cheapest spots in Kabukichō, costing just ¥300 for 26 pitches. You’ll see serious hitters here, taking advantage of the 80mph (130kph) fast balls, as well as young couples goofing off.

Liven up your night at Lockup

If you want eyeballs in your drinks and brains for dinner, then Lockup is a great theme restaurant in Shinjuku to start your night of presumed weirdness. The theme is relentless, from the second you step into the hallways with sirens and alarms to the prison-cell seating to the zombies/monsters serving your food. Enjoy your dinner but keep your wits about you, mutilated horrors will storm in to terrify you. And if you anyone orders a birthday cake be prepared for ear-damaging screams when it is delivered. Prices aren’t much higher than a regular izakaya and everything is presented pretty creatively, be it in a test tube or a skull! Have a look at the website for more details.

Try your luck at a pachinko parlor

As close as Japan gets to gambling (legally), pachinko is a very popular pastime with more parlors than you can shake a stick at in this dodgy district. Now, if you hope to understand this game, good luck. The screaming racket that emanates from these glowing halls every time a door opens is genuinely quite horrifying — but you can give it a go.

Insert your money into the machine and wait for the happy crashing of tiny silver balls, then begin — you might win more, you might not. Who knows. It’s fun to try though, and obviously pretty addictive. Each tiny ball costs between ¥1–¥4 yen, so you can keep it cheap if you just want to try, but it can add up. Your aim is to make the balls land between the pegs, and the strength with which you turn the handle determines how strong they shoot out.

Due to people spending insane amounts of money over long hours, security are quick to chuck you out over privacy fears, so head in with confidence and sit down straight away to show you aren’t just gawking. Avoid very empty parlors, as they probably have a reputation for low payouts. And if you’re serious, check the stats on the top of each machine to work out which has the best chance of paying out.

Whether you intend on experiencing the more graphic offerings of Kabukicho or not, it can be interesting to have a stroll, chu-hai in hand, to see how things work. Plus, we can’t ignore the elephant in the room much longer — rather than the window performers of Amsterdam, here things are all behind curtains; however, some shops are so smart they could be a knock-off Apple store. Take your pick from iPad displays, with the lucky girl (cough) waiting upstairs. Some shops are not so subtle, with some very non-PG displays, but usually manga-style which is considered acceptable.

There are plenty of sex shops, girl bars, hostess clubs, host clubs and more; there are even bars specifically for groping. But beware, touts are intense, so if you even glance at some shops you’ll be trailed for ages with numerous offers of varying legality.

Don Quijote — better known as “Donki” — is Japan’s original all-night shopping emporium. Fitting, for a neighborhood where most of the working population necessarily keeps odd hours. Donki stocks assorted sundries, like food, alcohol, toiletries, home goods, sex toys, and role play costumes — wait, what? Yes, Donki sells all kinds of stuff in its narrow, crammed aisles. Excellent for souvenir hunting, or when you have time to kill before the trains start running again in the morning.

Spend the night in a love hotel

For a night you won’t forget, try visiting a love hotel. Whether you opt for the full night stay or a “rest,” you can experience all kinds of weirdness and maybe get some shuteye (or not). Depending on your budget, you can enjoy your own private hot tub, costumes, in-room light shows, and much more. While some are definitely pretty grim, the more up-market ones are respectable, for example Bali Hotel An Resort, or Hotel Moana.

Alternatively, you could visit the movie-famous Hotel Atlas (from Kabukicho Love Hotel) which offers discounts for girl groups. Although many can be booked online through regular booking sites (no matter how fancy it looks), if you have the two prices listed outside, it’s a love hotel.

We have some more tips about booking them here.

Take a breather at Hanazono Shrine

Shintō shrine Hanazono-jinja has been standing guard over Shinjuku since the beginning of the Edo period (1603–1868), and likely earlier. It’s an “inari” shrine, which means its good for business and trade — a good fit for the neighborhood. There’s also a small sub-shrine, Geino Asama-jinja, that is popular with entertainers who come to pay their respects before big gigs.

The shrine hosts festivals throughout the year. Most noteworthy is the Tori-no-ichi (“Rooster Market”) in November, which is also all about prosperity. There is also has a regular Sunday flea market.

The shrine itself isn’t much to look at — the buildings, though traditional-looking, are all modern constructions. What’s most impressive is that this oasis of calm exists in the middle of Kabukicho. There are two entrances to Hanazono-jinja: via the big stone torii gate on Meiji-dori or via the lantern lit path from Golden Gai. 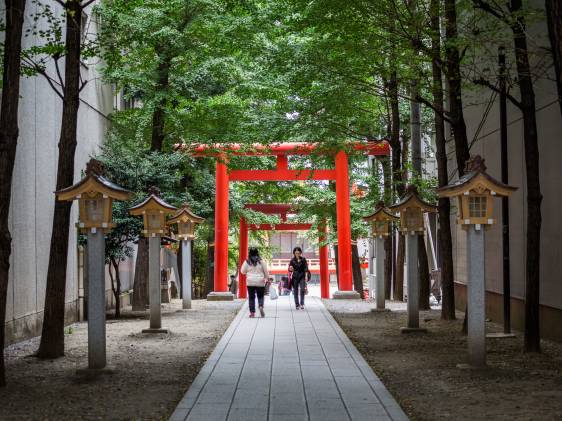 Shinjuku
Written by: Lily Crossley-Baxter
Lily's Tokyo favorites are: Shirohige Cream Puff Factory, Anata No Warehouse, Todoroki Valley
Filed under: Things to do
Tags:
Sharing
Questions or comments about this article?
Start a thread on our community forum
Ask our local experts about Tokyo