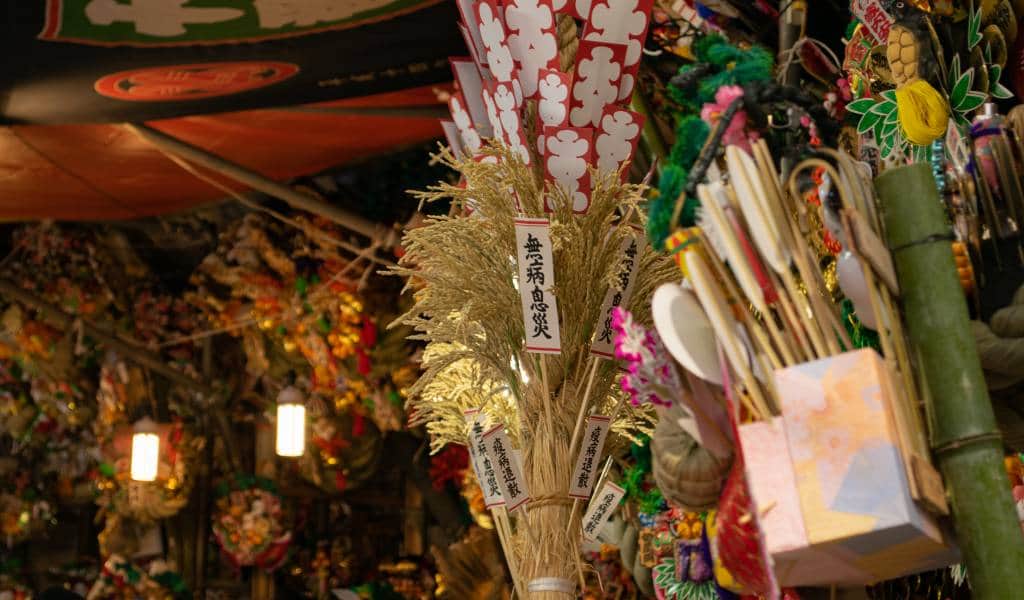 Rake in Luck for the New Year at Tori no Ichi

Every November, on “rooster days” — according to the Chinese zodiac — several shrines around Tokyo host Tori no Ichi, or “Rooster Markets.” This tradition, which dates back to the Edo period (1603–1868), see shrines fill with vendors selling kumade, ornamental rakes that function as talismen for wealth and success.

These markets remain hugely popular with locals, with the most famous ones drawing hundreds of thousands of visitors. Tori no ichi marks the beginning of the lead up to the New Year. Major ones go on well after dusk, so there is a night market vibe, too. Maybe you could use some luck? Or maybe you just want to check out a cool traditional festival. Either way, read on for more details.

Incidentally, having three rooster days in November is considered a bad omen for fires!

Where to celebrate Tori no Ichi

The top three Rooster Markets in Tokyo are held at Asakusa’s Ōtori-jinja, Shinjuku’s Hanazono-jinja, and Fuchū’s Ōkunitama-jinja. Festivities traditionally begin at midnight, with the beating of a taiko drum.

Check out the event listings for more specific details.

Tip: Don’t get overwhelmed by the enormous lines starting several blocks before the shrines. These are people waiting to pray at the shrine — you can bypass them and enter the shrine’s grounds (and the kumade market) from the side streets.

What happens at Tori no Ichi?

Vendors — at larger festivals, there can be over 100 — gather to sell ornamental rakes called, kumade (which literally means “bear’s paw”). The rakes are meant to be lucky charms for financial success — for literally “raking in the money.” They can be simple and small or enormous and elaborate, starting as low as ¥1,000 and costing upwards of hundreds of thousands of yen. The idea is to trade up for a larger rake each year. Whenever a new kumade is purchased, there is much clapping all around in celebration.

The kumade themselves are also rich in symolism, beyond just the rake bit. For example, many are decorated with figures of Japan’s “seven lucky gods.” Or tai (sea bream or red snapper), a prized fish whose name brings to mind the word “medetai” (auspicious). Or rice barrels (symbolizing both a good harvest and abundance). It’s safe to say that every ornament on a kumade is lucky in some way or form.

History of Tori no Ichi

Tori no Ichi dates to the 17th century. It began as a kind of harvest thanksgiving festival/farmers market and evolved into one where merchants came to pray for success in the New Year.

The shrine most historically associated with Tori no Ichi is Asakusa’s Ōtori-jinja. According to legend, the mythical hero Yamato Takeru stopped there sometime 2000 years ago and dedicated his war-rake to the shrine’s eagle-god (Amenohiwashi no Mikoto, if you must know). This happened on a “rooster day,” and this became a particularly auspcious day to visit the shrine. The rake, meanwhile, became the shrine’s symbol.

The Tori no Ichi at Asakusa’s Ōtori-jinja attracted a lot of attention because the shrine was located near the Yoshiwara, Edo’s adult entertainment district. At the time, the Yoshiwara and its famous beauties were the source of much public fascination. The popularity of the market here led other shrines to adopt the custom.

This article was originally written by Grigoris Miliaresis and published in 2015. It was most recently updated in November 2022.

Written by: TC Team
Filed under: Events | Japanese Culture And Tradition
Tags:
Sharing
Questions or comments about this article?
Start a thread on our community forum
Ask our local experts about Tokyo