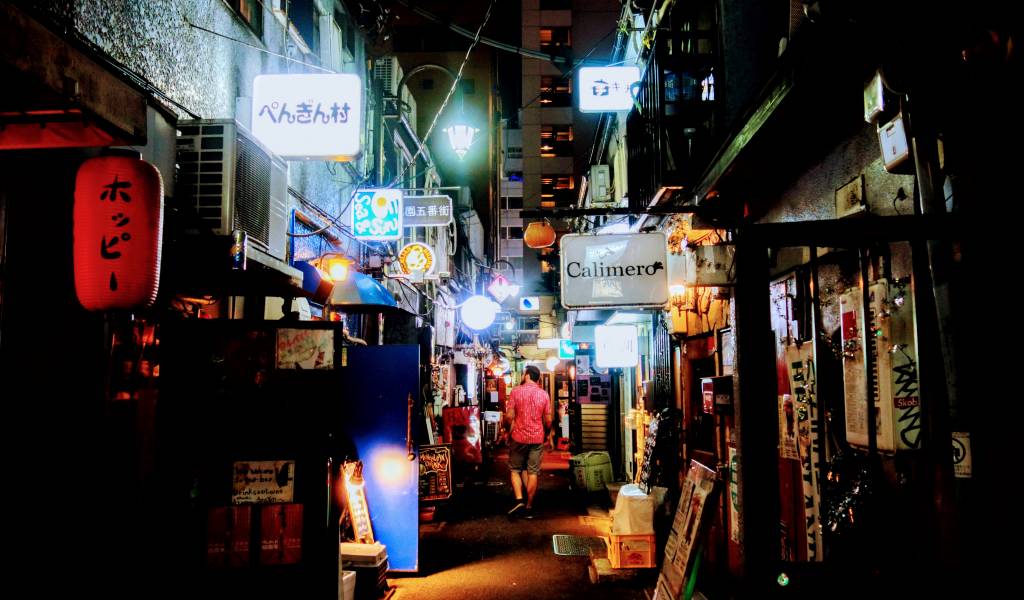 One of those not-so-secret secret spots, Golden Gai is a collection of mismatched, tumbledown bars lining alleyways in a darkened corner of Shinjuku.

Wandering through the slightly sketchy streets of red-light district Kabukichō, wind through the touts and ignore the calls for the more unsavory drinking spots. Instead head to Golden Gai, a charmingly scruffy part of the normally neon-lit Shinjuku.

While surrounding areas have been developed and look like any other part of Tokyo, Shinjuku’s Golden Gai retains that now-rare post-war charm. Frequented by celebrities, artists, and writers and home to myriad small bars and restaurants, each night is an adventure into the unknown and unexpected.

With a similar vibe to nearby Omoide Yokochō (aka Piss Alley), but focusing on cocktails rather than yakitori, Golden Gai has been growing in popularity as visitors seek that elusive unpolished side of Tokyo (night) life.

Pro tip: Bars in Golden Gai tend to open from about 8pm, so don’t head over too early or you’ll find empty streets and (too many) empty seats.

Where to go in Golden Gai: Narrow down your narrow streets

Made up of six alleys tightly packed with independent bars, half the experience is wandering through, with each small entrance completely individual — covered in stickers, pristine and painted, or aged and battered. With many of the buildings housing more than one bar, the steep staircases can lead to a completely different experience.

There are over 200 bars to choose from and knowing where to start is easier said than done. You may want to take a couple of things into consideration though: some bars do have signs saying “no foreigners”, “no tourists,” or “regulars only” — which, though you may disagree, is their right. With space for only a few customers, some wish to keep their seats free for regulars who will spend the evening rather than bar-hopping tourists who might have one drink, loiter, and leave. So take notice of the signs and choose somewhere more welcoming — after all, you’re not exactly short of friendly alternatives here.

Pro tip: You can enlist the help of a local guide to show you some of the top spots.

Generally, if you see an English menu or catch the eye of a friendly bartender, you can head on in. There are also cover charges at some establishments, undoubtedly to help the bar-hopping issue, but they are clearly marked on doors and many bars are free to enter.

Places to eat in Golden Gai

There are a decent selection of food spots if you look hard enough in Golden Gai, some offering restaurant experiences, while others offer a more relaxed environment. Head to second-floor noodle joint Nagi for some tasty niboshi-based ramen, or Bistro Pavo for homemade pastas and risottos (the daily dish is ¥800).

Be it a hospital-themed bar, a failed S&M club, or grass-covered walls, you can find pretty much anything within Golden Gai, if you’re willing to explore. Keep an eye out for Tachibana Clinic if you want a taste of medical macabre along with your drinks. Or wander over to Bar Plastic Model — an 80s and 90s bar with records, books, and all kinds of trinkets.

Head to Happy Bar for soul, rock, and blues music from the good old days, as well as some Showa-era sounds to match the surroundings. Hair of the Dog has excellent music choices for those of us who enjoy 80s punk and ska. La Jetée is a well-known bar in the filmmakers’ circle, with the tiny space being used for scenes in the movie Tokyo Ga, and is frequented by cinephiles and actors.

While half the fun is picking your own bar from the many options, if it’s your first time to visit and you feel a bit intimidated by it all and want some suggestions on where to start, then look no further:

A stylish merger of Edwardian and Gothic, with gilded mirrors, chandeliers, stag heads, and the odd disco ball, Albatross is rumored to have once been a brothel. This two-floor bar with a makeshift roof terrace has room for small groups, as well as counter seats for couples and individuals. The staff are really friendly and there’s always an interesting selection of drinks, from Darjeeling liquor to homemade plum tequila. They have a ¥500 cover charge per person, but you do get snacks for it.

If you’re a fan of death metal, then this is one of the best spots. With no cover charge, loud music, and hundreds of rock performance DVDs to choose from, it’s easy to while away a night among your heroes. The bar is counter-only, with some deep breaths needed to squeeze in. But once you’re in, you’re part of the family (and it’s too much effort to leave after that anyway).

Guaranteeing a good welcome, Kenzo’s Bar has leopard-print wallpaper, 80s music, and alcohol — so basically all you need for a great night. He is a super-friendly host and welcomes foreigners. Running a bar is only one of his roles, as he is an actor and screenwriter, too. There is a ¥500 cover charge, but drinks are reasonable and you’ll probably find yourselves staying for more than one.

This place ticks all the boxes for any nervous first-timers: no cover charge, very reasonable drinks, and English-speaking staff, as well as an eclectic playlist and great atmosphere. There’s a good mix of locals and visitors, and since it has a reputation as a tourist-friendly spot, there are no side-eyes coming from patrons, who want to chat as much as you do.

The golden rules of Golden Gai

The more general rule of “when in Rome” still applies in Golden Gai, even when drinking, and is especially important in small bars like these. We don’t need to tell you to be conscientious revelers, but keep in mind that there will be no qualms about chucking you out if you make it uncomfortable for other customers. There are rules within individual bars, some normal (like seating charges), and some less so (like ¥5,000 sleeping charges), but you’ll always be warned by the staff and/or signs beforehand — so don’t worry.

The alley network itself also has some rules, and they may seem tempting to ignore (as they include no photographs), but at least be discreet. Most importantly, in Japan you are not meant to use photos of people’s faces, and being seen taking any is a quick way to get chucked out. If you do have any, blur them out or just don’t use them.

Getting to Shinjuku Golden Gai

Golden Gai is about a 10-minute walk from the east exit of Shinjuku Station. If you’re walking east down Yasukuni-dōri, past the Don Quijote, look for the lantern-lit lane on the left, just past the Mr Donut. Golden Gai is right near Shintō shrine, Hanazono-jinja.

What else is there to see in the neighborhood? Here are our top picks for what to do in Kabukichō.

While we do our best to ensure it’s correct, information is subject to change. This post was first published in October 2017 and was last updated in May 2022.