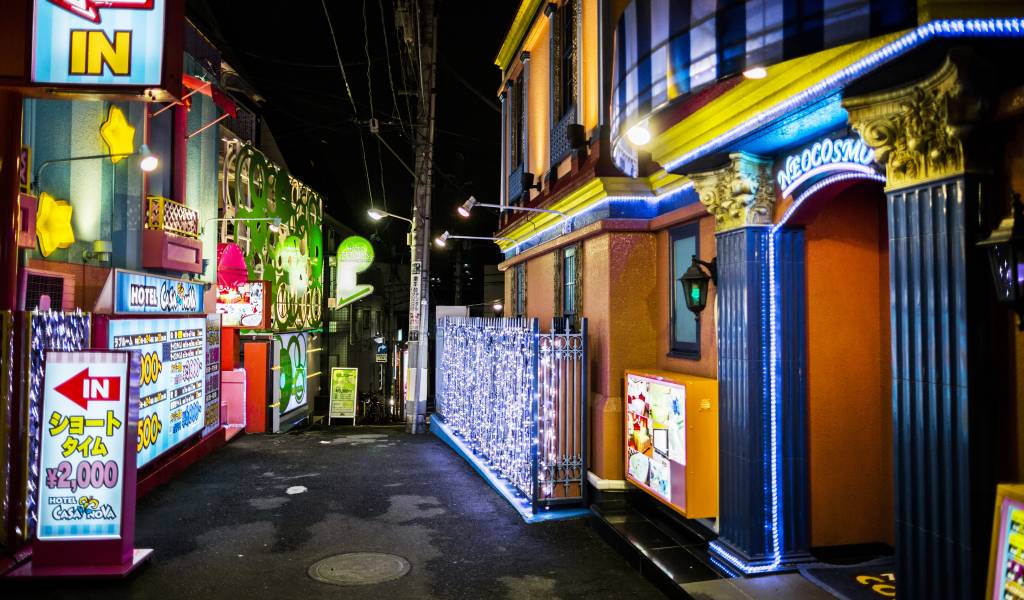 The Complete Guide to Love Hotels in Tokyo

Ready for some lovin’? Perhaps you stay in a guesthouse or tiny apartment with paper-thin walls, or simply have too many roommates all up in your business, and not in a good way. You could go to a regular hotel, but respectability is boring. Plus, who doesn’t love mirrored ceilings, jacuzzi tubs, and complimentary flavored condoms? Erhm…Tokyo love hotels, here we come!

Enter the Tokyo love hotel, or rabuho. Though this idea might seem somewhat sleazy to people used to the idea of no-tell motels back in the States, love hotels are clean and used not only by trysting lovers, but middle-aged couples looking to get away from the live-in in-laws (and vice versa).

Also called fashion hotels, couple hotels, leisure hotels, and sometimes the rather blatant “sex hotels”, these kitsch havens offer fun themed sleeping (or not sleeping) experiences for prices comparable to business hotels. Additionally, there are a few workarounds that can save you some extra yens.

What is a love hotel?

Although the concept of having a hotel specifically for the purposes of getting your groove on goes all the way back to the Edo period, the first love hotels as we now know them started up in the late 1950s and early 1960s. At the time, Japanese homes were usually designed with sleeping areas doubling as living areas during the day and, as a result, not much scope for afternoon delight—and even less so if you had kids or live-in in-laws.

Increasing car ownership in the 1960s made the concept of motels more familiar, and the first Japanese love hotels on the edges of highways sprang up in that decade. Swings and vibrating beds were already part of the schtick, as was the frankly bonkers architecture characteristic of many older rabuho. (A lot of the flamboyant love hotel architecture does survive, though. We’re looking at you, Meguro Emperor in Meguro, Hotel Zebra in Ikebukuro, and Hotel UFO in Chiba).

Police scrutiny from the later 1970s onward pushed the more flamboyant features of love hotels indoors, and most newer ones have fairly nondescript exteriors that sort of blend into the Tokyo streets. In keeping with the on-the-DL protocol, some love hotels even have separate entrances and exits so that you and your honey can arrive and leave without being too conspicuous.

You’ll typically find rabuho near stations, in somewhat out-of-the-way areas in suburbia or industria, or near highways. With over 37,000 Japanese love hotels in existence, it’s not surprising that they’ve even made their way into emoji. It’s estimated that over a million couples visit love hotels every day. (And if you’re more interested in reading about rabuho than visiting them, take a look at this article or this book for an academic deep dive.)

Love hotels in Tokyo and elsewhere in Japan can be identified by their creative names and often kitschy façades. Witness: Hotel Casa Nova, XO Shinjuku, Casablanca Ikebukuro, the aforementioned Hotel Zebra, Ramses Club, Hotel Adore, Hotel Ring My Bell—need we go on? Often adorned with neon colors and generally gaudy decor, most love hotels have some degree of boudoir fancy that makes them easily identifiable.

Who can use love hotels?

In short, any consenting adults. But while most Tokyo love hotels tend to be anonymous, often with little or even no human interaction (other than with your special friend) during the transaction, there have been reports of people being turned away for being not the “right” clientele. These stories of refusal include same-sex pairs, groups larger than two, and non-Japanese looking (or speaking) people. However, we have never been turned away, and have visited quite a few establishments both in Tokyo and farther afield, like in good old Osaka. 😉

Where can I find love hotels?

Love hotels can be found all over Tokyo and Japan, but the biggest areas in Tokyo for concentrations of hotels are Uguisudani near Ueno (±61 in the greater ward), the Dogenzaka/Maruyama “Love Hotel Hill” area of Shibuya (±34), Shinjuku’s Kabukicho (±72), and Ikebukuro’s East, North, and West exits (±86) according to Happy Hotel. The site (in Japanese) has a fairly comprehensive listing of love hotels in Shinjuku, Shibuya, Roppongi, Ikebukuro and beyond, with addresses, ratings, pictures, and even some coupons for things like free drinks or a thousand yen off the room price. But for the more spontaneous, a good bet is to just stroll around one of the districts, look for a love hotel whose features and fees fit your fancy, and saunter in.

How do I get a room at a love hotel?

Love hotels can be identified not only by their fetching fronts, but by the signs advertising rest and stay prices. Once inside, you’re likely to encounter a big board with pictures of various rooms and their prices. Rooms that are lit up are available; if they’re dark, they are occupied and you won’t be able to select them. Choose a room, and either press the button on the board itself or on a nearby machine.

Occasionally, you will have to deal with a human to whom you’ll tell your choice, but the clerk will usually be behind a small window in a wall, with only hands visible. Eye contact is almost never made. Unless it’s an old lady at the desk—then brace yourself for awkward greetings and no less awkward thanks on the way out. But either way, your secrets are safe here.

Sometimes you’ll get a key, but often you’ll be directed to just go to the room, where the door will be unlocked. Once in, the door locks automatically. Some love hotels do not allow re-entry into the room, so be aware of that if you were planning to leave for dinner. Payment is usually at a machine: sometimes in the room, sometimes by pneumatic tube (yes, really), and sometimes through the tiny reception window with the floating human hands. Typically, payment is made up front, and they’ll charge you if you overstay.

If you don’t want to leave your hotel or your room up to chance, Happy Hotel offers reviews by users (though again, you’ll need some Japanese, or Google Translate, to be able to read them).

Can you book a love hotel room online?

Three cheers for the internet: you can (check our list at the end of this article). Even love hotels have spotted the potential upside to their business that comes from getting with the digital program, so a number are now available to book online.

Note that most of the prices on the booking sites (even with discounts) are at the top end of the price range for these places, so if you can overcome the uncertainty of not knowing whether you’ll have accommodation for the night, booking on the day is the recommended option for getting the best deal.

Pro tip: If a hotel on a booking site is listed as “Adults only”, it’s quite likely a love hotel.

How much does a love hotel cost?

Rabuho famously have “rest” (休憩) times (lasting about 2–3 hours) and “stay” (宿泊) times (overnight). Rest rates start around ¥3,000, while stay rates are about two to three times higher. Check-in times for a love hotel stay start pretty late—think 10 pm or even later, checking out around 10 or 11 am.

Saving money at a rabuho

One bargain to look for: “service” or “free” time (サービスタイム or フリータイム) is the best deal, typically because the hours are off-peak/inconvenient. For example, taking a room from 6 am to 6 pm might be half the cost of the love hotel’s usual stay rate. Of course, rates vary by location, and you might not want to sleep the daylight hours away, but for night owls, dancing fools, all-night karaokers, and people willing to mess up their circadian rhythms for a deal (we salute you), service time just might be your jam.

Finally, some love hotels offer membership cards. Just like at the supermarket or the coffee shop, you can earn points, discounts and free stays with your loyalty to a certain chain. Prices for these cards vary; some of them are free, while others take a small membership fee—say ¥500 or so. Kind of a modern notch-on-the-belt (or bedpost) system. This will either give you great delight, or make you realize that you might save money moving into an apartment with thicker walls and fewer roommates.

What amenities do love hotels offer?

Indoors, you’ll find rooms decked out with themed decorations (or bland themeless rooms if it’s really budget), fancy bathrooms with showers for two, jet baths, etc., and a TV stocked with all kinds of, ahem, special channels. Unlike biz hotels, you don’t have to pay extra for the juicier programs. Oh, and love hotels also often offer wifi too.

There will also sometimes be room service, vending machines with various toys, karaoke machines, disco lights, costume rental for some spicy cosplay, and more. We’ve stayed in rooms decked out with flowers, figurines, and tinkly lullaby music playing overhead (creepy), a Chinese opium den themed room, a pole smack in the middle of the room, velvet paintings, the list goes on.

The bathrooms in love hotels tend to also be even more well stocked with toiletries than your average hotel: shampoo, conditioner, lotions, creams, hair products, and of course, contraception. Two seems to be the standard for free condoms, so if you’re planning a marathon, you may want to come prepared. Note: some rabuho may not supply any protection at all, thanks to rebranding and legalities.

Some more unusual/infamous hotels (less likely to have a booking link):

Looking for someone to take to a love hotel? We have an article all about finding that special someone, on the cheap.

This article was first published in December 2014. Last updated in August 2021. While we make every effort to make sure our information is accurate, details may vary.

Written by: Selena Hoy
Filed under: Places to stay | Things to do
Tags:
Sharing
Questions or comments about this article?
Start a thread on our community forum
Ask our local experts about Tokyo