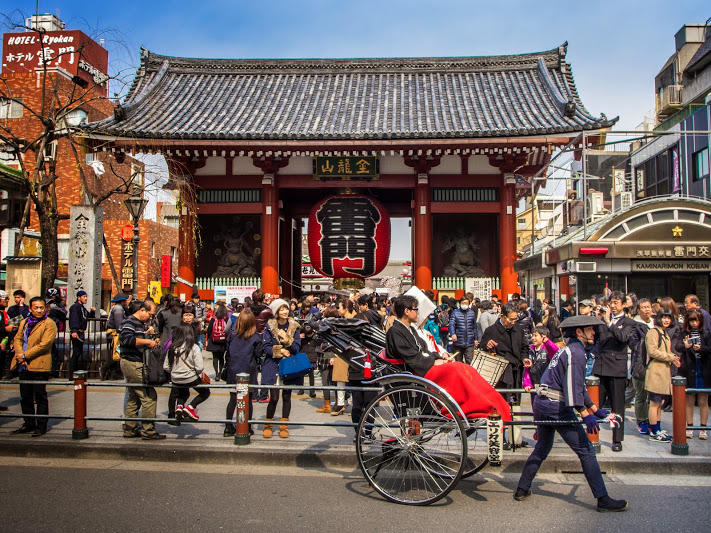 Check off five of Tokyo’s top sightseeing spots in one day, without spending a fortune. You’ll be sampling fresh sushi, strolling around a traditional Japanese garden, stopping by a famous temple, buzzing around the city’s anime and electronics hub, and doing a spot of shopping too. Whether it’s your first time in the capital or you’re a long-time resident with family or friends visiting, this cheapo self-guided Tsukiji–Asakusa–Akihabara tour won’t disappoint.

This version kicks off with a twirl around Japan’s most famous fish market, then a stroll around a traditional Japanese garden, on to Asakusa Kannon Temple, then the colorful, crazy area of Akihabara, and finally Shinjuku for scenic sundowners.

Top tip: Rather join an English guided tour? Check out these tour options for Tokyo’s most famous spots.

You’re going to start the day with a sushi breakfast (yes, that is possible) at this world-famous fish market. If you want to see the tuna auction, you’re out of luck as it moved to Toyosu in 2018. You’re not missing much though as Toyosu Market is not much better than a sterile, charmless, modern warehouse. The closest train stations to Tsukiji Market are Tsukijishijo on the Oedo Line and Tsukiji on the Hibiya Line.

See our guide for more about the best places to try at Tsukiji Market. You can find noodles and rice dishes at Tsukiji too, if you’re not up for raw fish quite so early in the day. Keep your eyes peeled for the taiyaki  at Sanuki-ya too—it’s traditional “grilled fish”—sweet fish-shaped cakes, that is!

While you’re there, look for Namiyoke Inari Jinja, a shrine on the Sumida River side of the outer market. It’s said to be a sort of guardian shrine for the fish market. You can also drop by Honganji Temple near the Hibiya Line train station.

Tsukiji literally means “Constructed Land”—the reason being that it was built on land reclaimed from the ocean. The fish market began its operations in 1935, with the main wholesale section shifting to Toyosu in October 2018.

Next, you’re heading to one of Tokyo’s most well-known and well-preserved traditional Japanese gardens. It’s an under-10-minute walk from Tsukijishijo or Shiodome Station, both of which are on the Oedo Line. If you have the time, just meander over from the fish market and save yourself a couple of hundred yen on train fare.

Hamarikyu is a splash of green at the mouth of the Sumida River—an oasis in the built-up city. The carefully landscaped garden has a lot of history, dating all the way back to the Edo period, when it was part of the Tokugawa Shogun’s residences. Depending on what time of year you go, you might see hydrangeas in bloom, azaleas, weeping cherry blossoms, fiery maple trees or other quintessential floral markers of the seasons in Japan.

While you’re ambling around, look out for the 300-year-old pine tree, as well as the teahouse. You’ll find the latter on Nakajima—the island in the middle of the pond (which, incidentally, is a tidal sea water pond—the only one in the whole of Tokyo).

The cedar bridge leading to the island has 300 years of history too, which you can learn about on one of the free garden tours (in English), or by using the voice guide devices available at the garden entrance.

At the teahouse, you can experience a simple tea ceremony for about ¥850. You’ll be given a bowl of matcha—strong green tea, and a sweet to offset its bitterness.

When you’re finished at Hamarikyu, you’re going to hop onto one of Tokyo’s water buses (suijo basu) and head to Asakusa via the Sumida River. It’s a novel and scenic way to travel, and far less crowded than the trains! The dock is a five-minute walk from Hamarikyu’s Oteman gate. Get a ticket for ¥800 and board an Asakusa-bound “bus”. They start running at 10:35 am, leaving every 30 minutes. Water Bus reservations can be made online.

On the approximately 60 minute journey up the river, you’ll pass under 10 or so bridges and you’ll see Tokyo Skytree—the city’s tallest tourist trap (see our cheapo tips for saving money at the tower). Snap some photos and sip on a cup of the specially brewed beer you can buy on the boat.

When you see the “golden flame” (aka “the golden turd”) of Asahi Breweries, you’ve arrived in Asakusa. Disembark at the Asakusa Nitenmon Terminal and head over to Sensoji, also known as Asakusa Kannon Temple.

Find the main Kaminarimon Gate and take the obligatory photo under its huge lantern. Then enter and have a look around. This is one of Tokyo’s biggest, oldest and most popular temples, home to the rather rough and rowdy Sanja Festival in May.

Walking along Nakamise Dori towards the temple, You’ll pass through about 200 m of stalls selling everything from yukata to traditional fans, pins, clothes emblazoned with samurai logos and more—a great place to get kitschy souvenirs. Be sure to sample some of the sembei (rice crackers). You can actually put together a decent lunch from all the snacks on sale.

Make your way up to the big incense pot at the end of the path leading to the temple, and watch as visitors waft the smoke around their bodies. The idea is that it purifies you—go ahead and try it if you feel like it.

If you’re hankering after a proper lunch, head into one of the local restaurants, go for soba, or get some cheap tempura at Tenya.

Perpendicular to Nakamise Street is Denpoin Street. Take a stroll for more traditional vibes and architecture—and even more shops and restaurants.

Your next destination is Japan’s center of otaku culture (a kind of holy land for anime, manga, figure and game fans). Take the Ginza Line to Ueno, then switch to JR or the Hibiya Line to get to Akihabara Station (¥168 or ¥304 depending on whether you Tokyo Metro it all the way or switch to JR at Ueno).

Brace yourself for an onslaught of maid cafes, anime goods, multi-storey game arcades with Dance Dance Revolution dance-offs and hundreds of UFO catchers, as well as any computer part you can imagine.

Here are five fun ideas for things to do while wandering around this wacky world of sub-cultures. Oh, and—a word of caution before you buy any electronics—the voltage might not be compatible with that of your home country, so check before you shell out any yen.

Take the JR Sobu Line to Ochanomizu and switch to the JR Chuo Rapid Line bound for Shinjuku (¥168). In Shinjuku, we’ll leave you to a well-deserved drink at Ku Kon during the bar’s happy hour, and a jaunt up to the observation floor of the Tokyo Metropolitan Government Building, which is right next door. This is a great place to get free views of the sprawling cityscape.

You can splash out on a semi-fancy dinner at one of the restaurants in the building, or head down into the streets of Shinjuku for cheap Japanese-style “gorilla” curry (don’t worry, it doesn’t contain gorillas), more sushi (some people just can’t get enough) or anything else you might fancy. Our Shinjuku area guide has lots of reasonable restaurant listings.

Use a Pasmo or Suica to get cheaper fares and check your train routes and fares on Hyperdia.com.