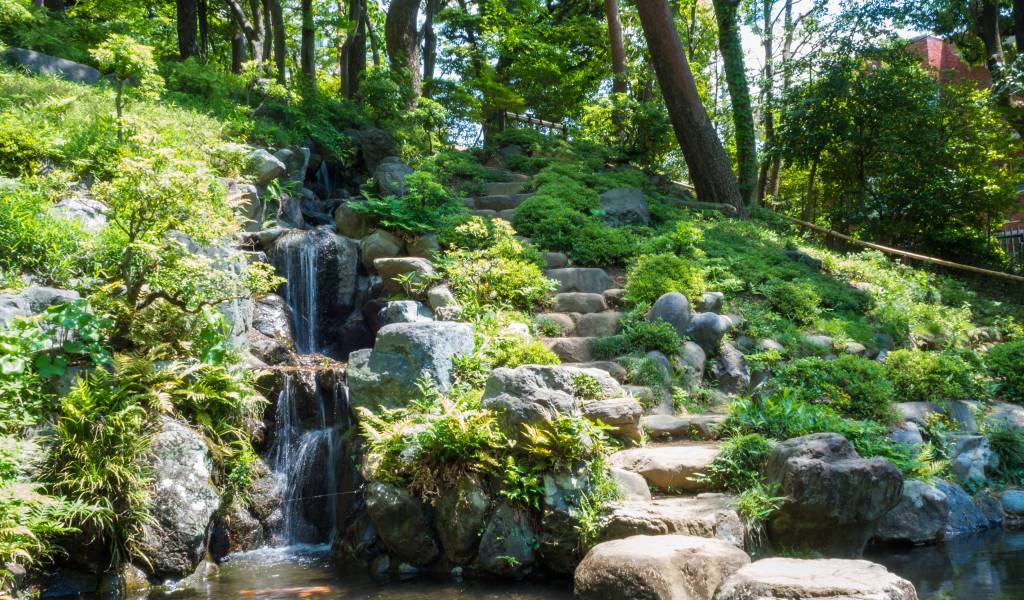 The crowds of Tokyo are part of what makes it so famous. However, with 13.6 million people living here, plus the 2.5 million that travel in every day for work, it’s no wonder you might feel the need for some breathing space.

While you have probably enjoyed the swarms of salarymen, the hordes of schoolgirls and the crushed commuters, the novelty of a busy city soon wears off and some greenery is needed. It may feel like you’re a million miles away from nature among the skyscrapers and towering apartment buildings, but there are pockets of escape all around—you just have to know where to look. Whether it’s an afternoon in the park with a book you’re craving, a quick lunch-break getaway, or even just a stroll after work to brush away the cobwebs, we have a secret pass to the oases of Tokyo (just keep them a secret).

A mini-escape at Atago Jinja

Known as the shrine with the “stairs to success” thanks to the endeavours of a dedicated young samurai and his fortunate horse (more on that here), this shrine is small, but has a lovely small garden. Originally built in 1603, the Shinto shrine was rebuilt in 1953 and is 26 meters above sea level, although unfortunately the once-excellent view has now been obscured by the modern skyline.

After you have climbed the stairs to success (a feat in itself) you can enjoy the koi pond and lovely evening lighting, whisking you away from the hustle and bustle as well as giving you some exercise. There is a small cafe and restaurant there too, so you can make the most of the evening.

Settle in at Shinjuku Gyoen

This national garden is an obvious pick, but it’s so lovely it just couldn’t be left out. Slap-bang in the middle of Tokyo’s busiest streets, it offers 58 hectares of beauty, including 1,500 cherry blossom trees, a greenhouse, a teahouse as well as ponds, a Thai pavilion and three styles of garden. The French, English and traditional Japanese spaces are all meticulously well cared for and there is plenty to explore too.

First created as a feudal lord’s residence in the Edo period before being transferred to the royal family in 1903, it was destroyed by bombing in WW2, before being restored and opened as a public park in 1949. There are three gates and the entrance fee is ¥500.

Take a break at Tonogayato Garden

A traditional Japanese garden located in Kokubunji, Tonogayato Park uses the natural slopes and valleys of the old Musashino region to create a relaxing space across different levels. The central pond has a natural spring, there is a bamboo forest and lawn with a small teahouse.

The garden is well cared for but still feels natural due to the thoughtful design, and was designated a Place of Scenic Beauty by the Tokyo Metropolitan Government.

Built for the vice-president of the Manchurian Railway in 1913, it has since been purchased as a public park and is particularly good for autumn leaf viewing.

Access: 2 minutes from the South Exit of Kokubunji Station on the JR Chuo Line

Get back to nature at Todoroki Valley

The only valley in Tokyo, Todoroki Valley is one kilometer of tranquility with a jungle-like feel. Bird-filled canopies cover the 1.2-km-long naturally forged ravine with a towpath, meaning you can wander and explore to your heart’s content.

With hidden shrines, a temple, a teahouse and gardens, the valley is a perfect afternoon getaway and only 20 minutes from Shibuya. It’s actually so perfect, I temporarily abandoned the writing of this very article to go there on a sunny Wednesday, and I promise it is absolutely lovely.

Above a busy department store in Ikebukuro, this roof terrace features a traditional Japanese garden with a small pond and bridge, as well as food courts and a seating area. The huge Loft sign means you won’t forget you’re in the strange city of Tokyo, but you can definitely have a break from it. If you get the elevator up to the 8th floor you can walk up to the garden area which is particularly nice at night thanks to the lighting.

Not only an escape from the busiest station in Japan, the garden above this department store is an escape from Japan itself. The carefully designed English garden has carefully tended lawns bordered with neatly trimmed hedges, a small rose garden, and most importantly, plenty of seating to enjoy the views. You can take your own food and drinks, with plenty to choose from in the department store food hall.

You take the elevator the the rooftop floor and then the stairs to the garden. In the evening there is nice soft lighting, lending it a romantic feel (if you ignore the salaryman with the chuhai in the corner).

Get traditional at Happoen Garden

Happoen Garden means “garden of eight views” or, alternatively, “beauty from all views”—and it’s easy to see why. With all of the traditional elements of a Japanese garden, it has a shrine, a koi-filled pond, traditional teahouse and bonsai, some which are over 500 years old. It is renowned for its harmony with nature, featuring cherry trees, Japanese maples and other seasonal trees and plants.

There are over 2,000 marriages yearly (apparently), so it is a good spot to see a procession! Don’t worry though, it is peaceful and a great place to take a breather on your travels.

Quieter than nearby Mori Park and located just behind Tokyo Midtown, Hinokicho Park is popular with families and lunch-breakers. While it may not be as serene as traditional gardens, it’s handy for a break. Originally the second home of a high-class samurai family, the municipal park was named after the many Hinoki cypress trees which filled the area. The park is home to a pond, wisteria arches and a rockery area separating it from the back of Midtown.

Perfect for lunch (would recommend takeout from Frey’s pizza around the corner) or an evening stroll in the subtle illuminations, it has its own low-key charm. The Midtown park is next-door and there is also 21_21 Design Sight which is perfect for a stroll.

So I know what you’re thinking, these places are all great on a sunny day or a clear winter one, but not so good in the rain (unless you like the dramatic Parisian idea of walks in the rain, that is). So, there is an indoor version: a teahouse in a flower shop—and it’s beautiful. Serving herb teas, cakes, meals and basically happiness, the menu is reasonable for an afternoon treat and feels special enough to warrant it.

This article was first published in November 2016. Last updated: June 2020.