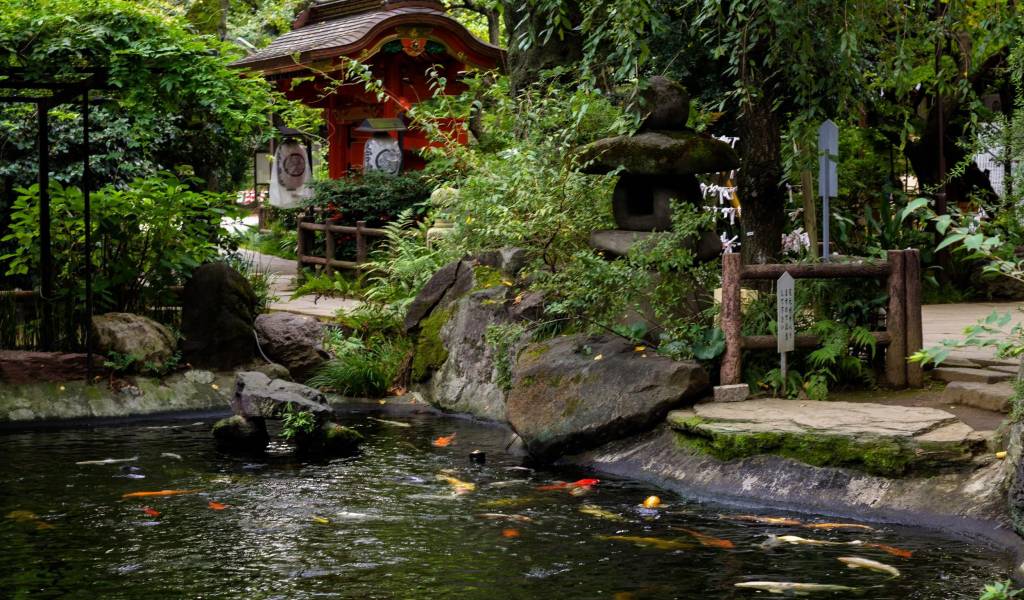 The Japanese magazine Metro Walker recently ran an article explaining how readers could “climb four mountains” in Tokyo in one day. Despite Japan being about 72% mountainous, Tokyo is unusually flat, so we were ready to call shenanigans. Turns out they were referring to places with the name ‘mountain’ which are basically high points, not quite exaggerated from molehills, but “mounds” would perhaps be more accurate. Places within the city proper where the ground is slightly elevated.

Entry is free at the four sites, passing the first and second rule of Club Cheapo, but are they all actually worth visiting? In a word: No. Atagoyama and Matsuchiyama are, but Komagome Fuji and Hakoneyama rate as ‘below sea level’ on our imaginary mountain rating scale.  They could still make a refreshing choice if you live in Tokyo and have already exhausted all of the regular sights, but there are better things to do with your time if you’re just visiting for a few days, a week, or even a month. Don’t skip the Skytree and Takeshita Dori and tell people Tokyo Cheapo sent you to a mound.

Set slightly back from Toranomon Hills, Midtown Tower’s 3 ft-shorter brother, is a bulge of greenery which looks slightly out of place in Tokyo’s financial district, a little unnaturally natural.

From the north and west sides, you can walk past without noticing its relevance. There’s a couple of narrow sets of steps winding up to the top, but they’re shrouded in trees (and construction at the moment) and could quite easily be paths to somebody’s front door rather than a famous 400-year-old shrine. Though the current shrine was rebuilt in 1958, the site has stood since its construction was ordered by Tokugawa Ieyasu in 1603.

Approach it from the east side and climb the impressive set of stairs, flanked by two stone lions and punctuated at each end by torii gates. The steps represent success in life and, as legend goes, were once traversed in under a minute by a samurai delivering plum blossoms to the shogun (fierce feudal lords love their flowers). The journey back down, however, took 45 minutes as the exhausted horse tentatively shuffled down step by step.

The shaded summit boasts a relatively large pond full of koi carp, a shrine and a shop selling religious goods. There’s not much of a view outwards, but the trees that deny that pleasure also provide a welcome sense of sanctuary and peace from the city below.

The legends say that one night in the year 595, a 31-ft bluff suddenly appeared on the Sumida River bank. A temple named Matsuchiyama Shoden was later built on the sacred ground and, despite the numerous transformations of its surroundings, it still remains a place of worship 1,400 years later.

Thanks to what used to be a beautiful view Matsuchiyama appeared in a number of poems and ukiyo-e during the Edo period, and would receive many visitors from the nearby shops and the pleasure district. It later fell on harder times, having been destroyed twice—during the Great Earthquake of 1923, and again in the Second World War—but was restored to its modern form in 1960.

Throughout the temple grounds you’ll notice two symbols: a bag of money, a pretty common theme for surprisingly materialistic Buddhist shrines, and two radishes intertwined in a manner that would probably get them blurred out on a Japanese DVD. They represent commercial success and vitality, both of which are said to be granted to visitors of the temple. If a metaphorical health-giving radish isn’t enough, you can also buy the vegetable itself at the temple, though after seeing what they’ve been up to we decided to pass.

Not the 4,717-ft mountain south of Tokyo in hot-spring-haven Hakone, but an elevated piece of land in Shinjuku ward. Hakonemound, as we’ll call it for clarity, can be found in Toyama Park, which is unfortunately a sparse and faded remnant of the enormous pond-filled garden it was said to be during the Edo period. As you approach you’d be forgiven for wondering where the mountain could be, but after making your way through the surrounding woodland it rises up from the ground in perfect contrast to the sinking sense of disappointment in your stomach. Yes, that’s it.

Emerging from the depths of the Fukutoshin Line platform to Higashi-Shinjuku’s exit is far more taxing than the thirty or so steps you’ll need climb to reach Hakonemound’s summit, but once you get to the top you’ll find your reward: a stone engraved with the numbers “44.6 m”, the highest point within the Yamanote circle. Just ignore the nearby four-story building towering over you.

In the interest of fairness, and also just because we enjoyed reading it so much, here’s a contrasting opinion—a 5-star Yelp review from the easily pleased, but rather poetic Kota N:

Climbing Mt. Fuji was completely forbidden for women until 1868, lest their impure sexuality sully the sanctity of the mountain or tempt any innocent pilgrim from his journey. And even for those with acceptable genitalia, it was a far more arduous task than today’s couple of hours on a bus and a few hours walk (though having to ignore all those impure women can be bothersome). Rather than going through the trouble of climbing the actual Mt. Fuji, people just built large mounds, erected shrines on top of them and decreed that they also provided the sacred mountain’s blessing. And we can only assume everyone was much happier.

Komagome’s Fuji Shrine was one of the most famous of these Fuji-lite’s, allowing pilgrims to survey the majesty of Japan’s symbolic mountain from central Edo. Unfortunately, the only thing modern pilgrims will be surveying is the murky greyish-brown block of flats which blanket the view to the southwest. It’s said that Fuji will still bestow its blessing on any visitors that make the pilgrimage to Komagome Fuji, but we’re not entirely sure that’s how magic mountain blessings work. We’ll let you decide for yourselves.

Spots mentioned in this article
Written by: Cal Widdall
Filed under: Outdoors and Nature | Things to do
Tags:
Sharing
Questions or comments about this article?
Start a thread on our community forum
Ask our local experts about Tokyo