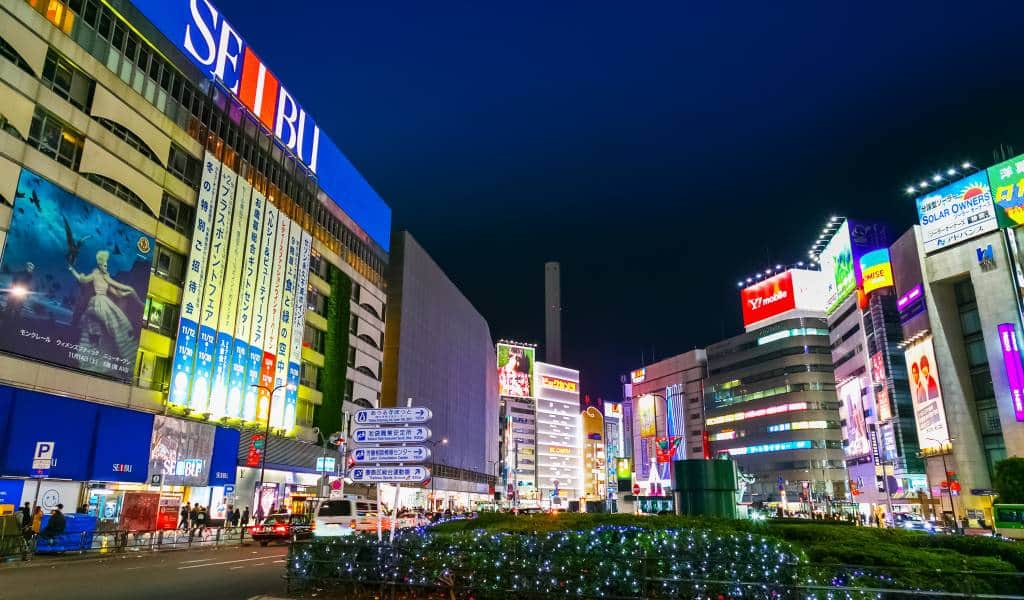 Ikebukuro combines the commercial atmosphere of Shinjuku with the pop-culture feeling of Akihabara. You can satisfy a group of tourists with different interests — anime, fashion, and electronics — by taking them on a day out in Ikebukuro.

This large commercial district has lots to offer the avid deal hunter too, with good beer, slurp-worthy ramen, and a shopping mall as big as a small town.

Need us to be more specific? Check out our full list on things to do in Ikebukuro.

A lot has happened in Ikebukuro in recent years: the old Sega arcade closed down and was replaced by Gigo, a poor imitation; Tokyu Hands Department Store bit the dust, and Animate — a favorite anime and manga shop — will expand to become the world’s largest anime store in 2023.

From October 2022 until spring 2023, the Sunshine 60 Observatory will be closed for renovations.

Ikebukuro is a few stations north of Shinjuku and is often seen as a gateway to Saitama, Tokyo’s northern neighbor. The neighborhood lies in Toshima City and is considered Toshima’s most famous district.

Despite a concentration of expensive department stores around the station and the nearby Sunshine Building — once the tallest building in Tokyo — the area is quite down-market. It’s mostly made up of students and salarymen. But it’s pretty much guaranteed that if you’re looking for a cheap chain store, they’ll have a branch in Ikebukuro.

Ikebukuro is considered Tokyo’s second-biggest red-light district (after Kabukicho in Shinjuku.) While this means you should be aware of touts, the seediness is generally kept to the west of Ikebukuro after dark — even then, it is generally quite safe.

What is Ikebukuro known for?

Ikebukuro is known for its shopping, arcades, anime fans, and family day outs at the aquarium. It is also the place for owl lovers; as Ikebukuro is similar to the Japanese word for owl, fukurou, you will find statues, cafés, merchandise, and more glorifying the animal. (Please note that Tokyo Cheapo does not support owl cafés. Take a look at our cruelty-free alternatives.)

Ikebukuro was also popularized to the world by the anime and manga Durarara!!, which revolves around an adolescent boy caught up in the fantastical underground world of Ikebukuro.

What is Otome Road?

Although overshadowed by Akihabara, Ikebukuro also has a reputation for being an otaku hub. A popular notion is that Akihabara is for men, whereas Ikebukuro is for women because many of Ikebukuro’s anime and manga merchandise shops focus on BL (boys’ love) and yaoi (homoerotic media between men). This is why a certain shop-lined road across from Sunshine City is called Otome (Maiden) Road.

Ikebukuro’s centers of activity are the east and west districts, both of which have distinctly different ambiances. The west area is generally quieter in the daytime, but it comes alive at night with its many restaurants, karaoke centers, and izakaya. The east area, in contrast, is bustling all day and night, with numerous shops and restaurants.

What to see and do in Ikebukuro

Most tourists head straight over to Sunshine City on the east side to shop, scoff, and see the aquarium. There is also a nice, if overpriced, observatory on the 60th floor — a decent but squashed spot for seeing Diamond Fuji (currently closed until spring 2023).

If you’re looking for less crowded and money-snaffling activities in Ikebukuro, you could head over to the Bosaikan to learn how to handle earthquakes, scope out a maid café, chill on the Seibu department store’s roof garden, or browse the anime and manga stores on Otome Road.

The Tokyo Metropolitan Art Space near the West Exit has theaters and a concert hall. Occasionally, you can also see performances in front of it and at the adjacent West Gate Park.

What festivals are held in Ikebukuro?

Ikebukuro’s convenient location makes it a popular spot for events and festivals throughout the year — especially the new and unusual. The town celebrates a two-part Fukuro Matsuri, which has a mikoshi (portable shrine) procession in September and a yosakoi (a Japanese dance distinguished by the use of clappers) contest in October.

Dressing up is encouraged in Ikebukuro. So it’s not uncommon to see cosplayers on the street, especially during the Ikebukuro Halloween Cosplay Festival.

If these are too pricey, head over to Sunshine City and the road leading to it, Sunshine Street, where there are some cheaper options. They’re not flea market-cheap, but clothes and shoes there can be more affordable — especially when there’s a sale (and there often is).

Ikebukuro is a great place to shop for anime, manga, and cosplay merchandise. Find doujinshi (fan comics) at many of the shops along Otome Road. The nine-story flagship store of Animate, an anime/manga merchandise chain, is also located in East Ikebukuro, on a street perpendicular to Sunshine-Dori.

For animation lovers, Sunshine City has a Disney Store and MOE Garden, a shop with a wide selection of Studio Ghibli merchandise. Meanwhile, Pokémon fans will be delighted to know that the Pokémon Center Mega Tokyo, one of the largest Pokémon Centers in Japan, can be found in Sunshine City.

Where to eat and drink in Ikebukuro

Ikebukuro comes to life at lunchtime, when all of its students and businesspeople pour out onto the streets in search of grub. The local ramen is a popular choice, and there are cheap pizza joints, budget sushi, pasta, pho and curry stores galore. Except places like Katsumidori, department stores tend to be pricier for food, so your best bet is to put foot on the pavement and seek out a small spot slightly off the main routes — most places have lunch specials.

At Namjatown, you can try all sorts of gyōza variations. It also has a dessert alley where you can try odd flavors of ice cream, such as shrimp and curry.

If you’ve got a sweet tooth, the blood sugar busting buffet of Sweets Paradise is the spot for you.

Nightlife and entertainment in Ikebukuro

When it comes to drinking, there are a number of bars and pub-like watering holes around the station – including several branches of Hub. There is also the wonderfully named Beer Saurus, which offers craft brews and dinosaur décor. There’s not much in the way of clubs — Ikebukuro is more of a place to pre-drink before venturing farther afield.

How to get to and from Ikebukuro

Ikebukuro is one of the major stations in Tokyo – in fact, it’s said to be the third busiest after Shinjuku and Shibuya. This is because many commuters tend to live in cities on the northern outskirts of Tokyo and Ikebukuro has many lines that service them.

Getting to Ikebukuro from Narita

There are quite a few ways to get from Narita to Ikebukuro. The quickest route is with a change at Nippori Station, taking around 50 minutes at ¥2,750. To go directly, jump on the Narita Express — the journey takes 90 minutes.

Tips for getting around Ikebukuro

Hop on the bright red and eco-friendly Ikebus to get around Ikebukuro. It only costs ¥100 per ride (until Sep. 2023), plus it looks like a cute owl. The route will take you from Ikebukuro Station and all the way around Sunshine City. The whole journey takes 30 minutes.

Is Ikebukuro a good place to stay?

Ikebukuro has a few classy places to rest your head – notably the Hotel Metropolitan Hotel, which is a stone’s throw from the station. If you’re prepared to travel a few stops up the Seibu or Tobu-Tojo lines, you can find some very reasonable Airbnb offerings – otherwise there are guest houses, capsule hotels, manga cafes, and karaoke booths where you can wait till the sun comes up. If you find yourself on the north side (or south, east or west, for that matter) of the station, there is also a selection of love hotels you could book into. With names like Casablanca and themes that involve flashing lights and zebra stripes, you’re in for… well, quite the experience. Have a look at our full breakdown of how to get a cheap hotel in Tokyo if you’re stuck for ideas.

If you’re up for a stroll, nearby Gokokuji Temple and Kishimojindo are well worth a visit, as well as the tranquil Mejiro Garden.

All Articles about Ikebukuro

Things To Do in Ikebukuro

Getting Around in Ikebukuro