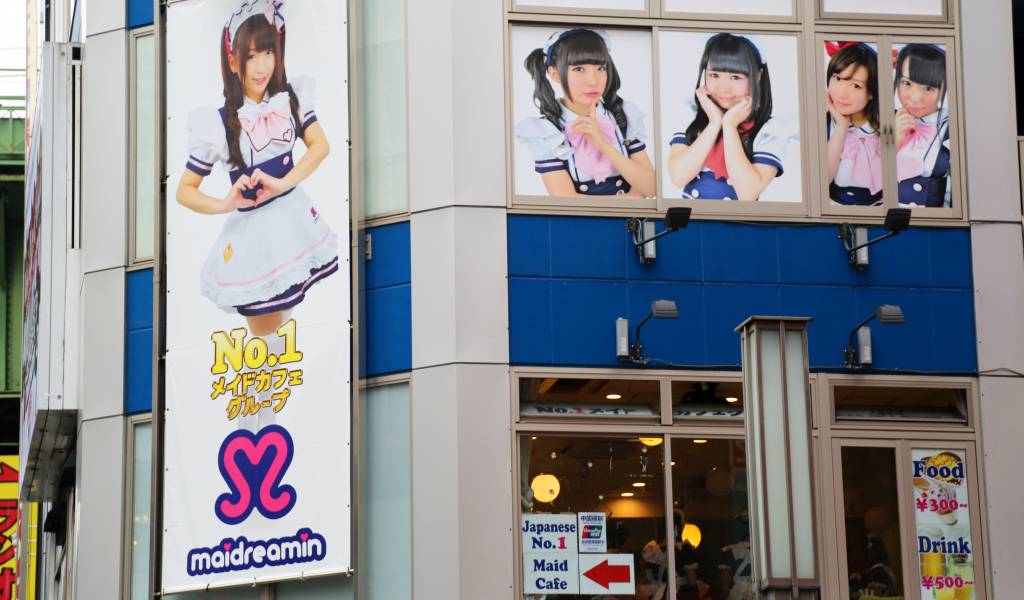 Which Maid Cafe Is For You?

Maid cafes are themed restaurants where waitresses dress as maids and address their customers as “master” and “mistress”. It may sound kinky, but there’s nothing kinky or sexual about these cafes. Originating in Akihabara, some of these cafes have branched out to other locations, not only in Tokyo but also in the rest of Japan, although many of them are situated in places where otaku are known to hang out.

Maid cafes don’t really have mainstream appeal—most of their repeat customers are otaku and/or fans of the maids—but to foreigners, these cafes are one of Japan’s pop culture icons. They’ve even spawned other maid-related services, such as ear-cleaning services. There are different types of maid cafes (and offshoots) to suit different tastes, so read on to see which Tokyo maid cafe suits you!

Note: A map of all the cafes mentioned in this article after the text.

Maidreamin, @home cafe, and Pinafore are the places to visit for you! Both of them can be credited for making the perky maid the default image that people think of when you say the words “maid cafe”. These establishments are all about moe, a concept that literally means “budding” and is used to refer to strong, affective feelings towards fictional characters.

How do you stir up moe? By being cute, of course! The maids at these cafes are bubbly and incredibly cutesy: they use high-pitched voices, kneel to take your order, draw designs with ketchup or syrup on your food and drinks, and make you chant “moe, moe, kyun~” or some related “incantation” (which doesn’t really mean anything, it just sounds cute) to “make your food more delicious.” The maids also sing and dance during shows and events, and, for a fee, they can also play games with you.

If you visit these cafes on your birthday month and show proof of your birthday, you can get a dessert, a birthday song performance, and a photo with all the maids—all for free (provided that you order something else, though).

As with most maid cafes, the food isn’t really anything special, and they have a table charge of about ¥500–¥600 (for Maidreamin, the price varies per branch; for @home, it’s ¥600). Not to mention, you can only stay for an hour; if you want to extend, you’ll have to pay the table charge again.

Maidreamin has branches in Akihabara (seven branches in this area alone), Ikebukuro, Shibuya, Shinjuku, Nakano, and Diver City in Odaiba. The Ikebukuro and Shibuya branches double as a bar.

Pinafore has three branches in Akihabara.

If you’re going for classic Victorian…

Go for Cure Maid Cafe in Akihabara, or Wonder Parlour Cafe or Cafe White Rose in Ikebukuro, near the East Exit.

Cure Maid Cafe holds the distinction of being the first maid cafe, and its ambiance is totally different from Maidreamin or @home. It’s a quiet, quaint little cafe—totally not gimmicky at all—and the maids are prim and proper, like Victorian-era maids. Instead of wearing maid outfits with cutesy accessories, they wear long outfits, in an attempt to remain faithful to Victorian style. Their selling point isn’t cuteness but ambiance. You can expect the same ambiance at Wonder Parlour and Cafe White Rose.

Cafe White Rose, owned by the same team behind Swallowtail Butler Cafe and Patisserie Swallowtail, doesn’t brand itself as a maid cafe, but its waitresses wear maid uniforms, and it looks like a Victorian-era tea room and library. For that reason, we decided to include it in this article. Notably enough, it tries to be known for its food, and not just its ambiance. The cafe’s pastries and desserts are beautifully created, and they sell items that you can take home: jam, macarons, scones, and cookies. They often have tie-ups with anime series, so you can expect some character-inspired desserts every now and then.

Cure Maid Cafe and Cafe White Rose have no table charge, although Wonder Parlour has one (¥500).

If you’re looking to take photos with the maids, you might be disappointed: you can’t for Cure and Wonder Parlour, and there’s no option to get a photo print. At Wonder Parlour, though, you can take photos of the interior, but you have to notify the staff first. As for Cafe White Rose, while photos of the interior are okay, ask regarding photos of/with the maids to be sure, as the maids sometimes have a booth in front of Tokyu Hands in East Ikebukuro, and some of them oblige to requests for photos when they’re not busy.

If you want to meet fellow hobbyists…

Schatz Kiste in Akihabara is a fusion of the classic Victorian-style maid cafe and a hobbyist cafe. They have a manga library and board games, and you might even be able to strike a conversation with other customers (you’d have to know even a teeniest bit of Japanese, of course). Their table charge is a bit pricier than others’ at ¥500 for 30 minutes. They don’t serve any heavy meals, but if you want to make new friends in a maid cafe, this is your chance.

If you want a local to show you around…

For those new to Tokyo, taking a private guided tour is an easy way to get a close up and insider’s view of the city’s quirks and iconic spots. Consider this guided tour by the company Magical Trip. It’s geared towards geeks and gamers, and includes a visit to a maid cafe.

If you want a traditional-meets-modern fusion…

The Sengoku (Warring States) era–themed Mononopu in Akihabara might be up your alley. Here, you are addressed as noblemen and noblewomen/princesses, and the maids wear a kimono-style top with frills (like that of a maid outfit) and armor. It’s a cafe and bar, so it has all-you-can-drink promos. The food isn’t traditional Japanese cuisine, though—they’ve got pasta as well!

If you want to meet crossdressing maids…

Otoko no Musume Cafe and Bar Newtype (that name is a mouthful!) in Akihabara is the place to go. Otoko no musume is the term for men who crossdress as women. Their table charge of ¥1,500 doesn’t come cheap, but if there’s any consolation, it already includes a drink. Frequent visits earn you points, and the higher the level you reach, the lower the table charge gets for subsequent visits. Food portions are a bit on the small side, but if you’re just there for the maids and drinks, you’re all good, as they’ve got a decent selection of alcohol and cocktails.

While Honey Honey and JAM Akihabara both serve food that is still considered overpriced (¥680 for five tiny spring rolls at Honey Honey, for instance), they’re reasonable for a maid cafe as they don’t impose a table charge. JAM Akihabara has a large menu—it claims to have over 300 menu items. Both cafes also hold events every so often.

The most reasonably priced maid cafe we’ve seen so far is The Granvania, which is a very short walk away from Akihabara Station. With the ambiance of a tavern, not unlike those in RPGs and fantasy series, Granvania doesn’t impose a table charge before 6 pm, after which it’s bar time, and patrons have to pay a table charge of ¥300.

Lack of table charge aside, this is also a cheapo option because of its food—they have weekday lunch sets with large portions for ¥810, and, in general, their menu is decently priced and, taste-wise, not too bad either. (Their cakes, priced at ¥567, are delicious, and the cafe staff recommend them.)

It helps that Granvania used to be an actual cafe before it became a maid cafe. In line with its tavern-like ambiance, the cafe has a selection of European beers, too. And if you like your peace and quiet, you’ll be glad to know that Granvania isn’t as gimmicky as Maidreamin or @home, what with the maids not being overly perky. However, if gimmicks are your thing, they do have a few too—join their daily “missions” (mini-games/challenges such as charades or finishing a large amount of food within a set amount of time) to win prizes such as a Polaroid photo with a maid.