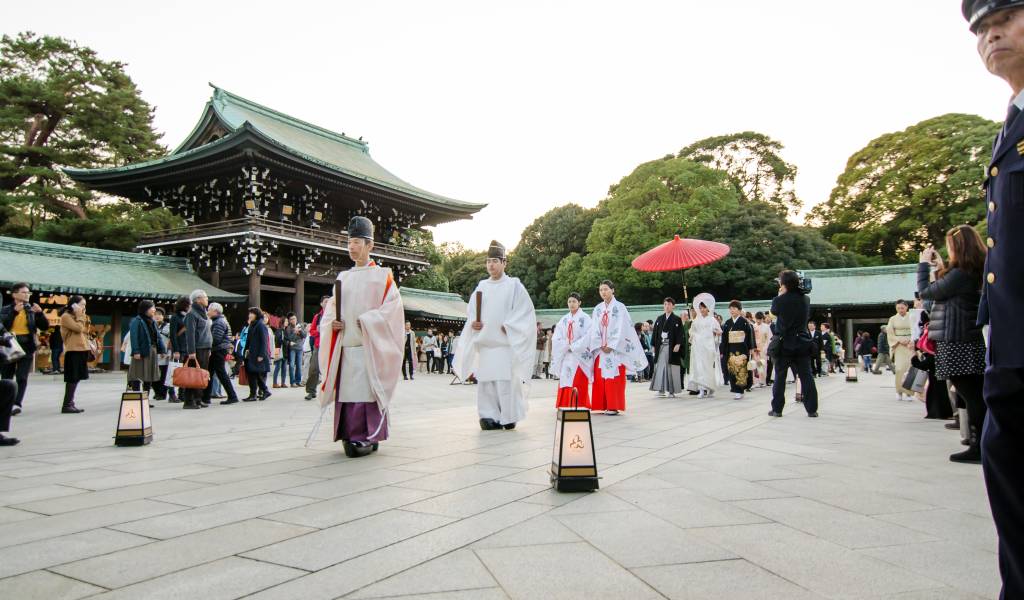 Budget Weddings in Tokyo: Getting Hitched on the Cheap

Thinking about getting married in Tokyo but freaking out about the costs? You’ve no doubt seen the prices of wedding packages—anything from 250,000 yen to 5 million and more. But as always, we’ve got your back. That’s why we’ve put together this guide on budget ways to get hitched. We shook the branches of the cheapo tree for advice and insights from friends who’ve had a wedding in Tokyo. And, without further ado before you say “I do”, here are their tips.

Need to send money home? Likely the cheapest and easiest method for transferring your yen out of Japan is TransferWise.

Getting married in Tokyo: Japanese or Western-style?

Lots of foreigners here, particularly if they are marrying a Japanese person, go for a traditional Japanese wedding, which is done at a shrine (more about that below). Western-style receptions afterwards are popular.

But a fair number of people (Japanese included) opt for an all-inclusive Western-style ceremony, bypassing the shrine and bringing in an officiant (church-affiliated or random innocent-eyed-and-rosy-cheeked foreign man) to do the job. Regardless of which option you go for, you and your spouse-to-be will need to stop by your city hall to make it official.

In Japan, marriages actually take place, as far as the law is concerned, at the city hall. You and your partner need to rock up in person to register your marriage in the presence of witnesses. To do that, you’ll need a document confirming your competence to get married—speak to your embassy for more details. Your marriage will be recorded in the koseki—the official family registry of the country, and then it’s happily ever after (we hope). If all your paperwork checks out, the registration should be a fairly straightforward process. It’s also virtually cost-free. If you’re marrying another foreigner in Japan, you won’t go into the koseki (since neither of you is Japanese), but it will still need to be noted at the city hall.

The great thing is that once you’ve sorted out your business at the city hall, you’re free to have a ceremony wherever you like. You could book a shrine, but be warned that it’s not cheap. You could have a picnic at Yoyogi Park, or even hang out in a parking lot (classy). You could skip the celebrations altogether, if you’re stony broke. But where’s the romance in that?

British Cheapo of Note Rob Horn, who splashed out to get hitched at Meiji Jingu in 2012, had a party with friends at a local restaurant to celebrate his newly-wed status. Being a strategically stingy sort, he recouped much of the reception cost by charging people 6,000 yen at the door. Before you judge that to be too high a level of scroogery, it’s actually standard practice in Japan—wedding guests will usually give you an envelope of cash to offset your expenses.

Horn says that you can make the wedding as low-cost or expensive as you like. “There’s nothing to stop you hiring out your own venue, your own self-employed ‘vicar’ and doing your own catering too,” he says. “This may end up costing you more, but might allow for a few more of your own creative touches—blind ferrets, shaved cats, and small children dressed as onions, for instance.” Sage advice if ever we heard it.

Hotels are a popular choice for wedding venues, and they often feature their own “chapels” – unconsecrated buildings or rooms that resemble the real thing.

While a full-scale event can easily cost over a million yen, there are sometimes budget wedding packages available for 100,000 to 200,000 yen. These tend to be the bare bones, though. We once saw a special offer at a hotel in Okinawa, where you could rent the clothes, say your vows in front of a for-hire not-so-reverent reverend and have a whole six photos taken for around 80,000 yen.

To avoid high fees, USA-born Distinguished Cheapo James Dunn recommends looking one or two train stops away from the big locations when getting married in Tokyo. He had a Western-style wedding ceremony and reception in 2009 at the Shin-Yokohama Kokusai Hotel, a less-expensive option than the hotels in Yokohama proper. He managed to save some yens in other ways too—as detailed below.

Outfits, MCs and everything else

Of course, there’s a lot more to a wedding than a nice venue. And it’s all the bits and bobs like invitations and name cards, MC fees, photographers, swanky threads, bubbly and so on that can add up to a zero bank balance. Dunn suggests tapping into the talents of your friends and family to cut costs. He and his wife made their own wedding cards, and family members helped them to make extras like the ring pillow and welcome board.

They also added a low-budget touch of fun to the photography on the day. “We put disposable cameras on each table so the guests could take photos,” he says. “Those turned out really well and we could keep some nice memories.” Dunn recommends asking a friend to MC the event to avoid hiring someone from the venue. The added bonus is that it makes the whole thing more familiar, he says.

For clothes, you can easily rent a suit, dress or more traditional wear for a few hours from any number of stores in Tokyo. And when it comes to booze, you can fill a basket with discount (but legit) sparkling wine at the Liquor Off stores. Giving gifts to your guests is customary in Japan, but you can get creative and either make or buy small but awesome token presents like soaps, sweets or packs of bath salts.

For same-sex couples looking to wed in Japan, it gets a little more complicated. Same-sex marriage is still not recognized in the country, though cities like Sapporo are taking steps to change that. Most shrines and temples are, sadly, likely to turn LGBTQ+ couples away, though there is (if you have a stash of monies) this option in Kyoto. Some other hotels are happy to take the pink yen too—you just have to ask.

There doesn’t seem to be a standard protocol for registering a legally recognized same-sex partnership that has been solemnized abroad in Japan—you’ll have to ask your embassy and city hall for advice.

Lastly, if you’re thinking about sticking around Tokyo after the nuptials, be sure to read our cheapo honeymoon guide.