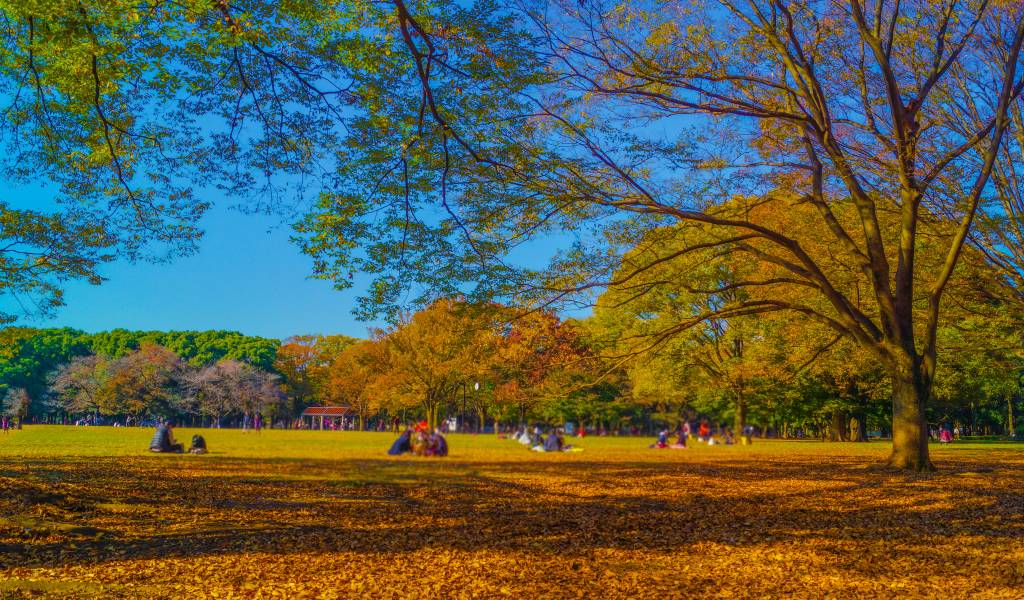 The Cheapo Guide to Yoyogi Park

Tokyo is full of parks, but Yoyogi Park is the true people’s park. Not only is it free, it’s lively and full of people — an excellent place to unwind after a busy week. At 54.1 hectares, Yoyogi Park is among Tokyo’s largest. But unlike the city’s other large parks, this one has a convenient location next to Harajuku. Here’s everything you need to know to make the most of your visit.

Yoyogi Park (Yoyogi-kōen in Japanese) officially became a public park in 1967, but prior to that it had a interesting history. It was once a military parade ground, and it was the site of military barracks when the US occupied Japan. In preparation for the 1964 Tokyo Olympics, the Yoyogi National Gymnasium was built, and the main athletes’ village was also in the park.

What is Yoyogi Park known for?

Part of Yoyogi’s charm is that it attracts all sorts of fascinating people. Since it’s quite close to Harajuku — a trendy place for both mainstream and alternative fashionistas — you’ll occasionally see those fashionistas in and around the park. You can also see street performers, people playing bongo drums and ukuleles, and people walking their pet ferrets…

But some of the most interesting people you’ll see are the rockabilly dancers, who gather there on Sundays. With their leather jackets and slicked-back hair, these dancers rock out to all the best 1950s hits. There’s no fixed time for their performances, so seeing them is partly a matter of chance. The dancers put on an energetic, entertaining performance, but they’re just doing it for the enjoyment of it, and not for money. Taking photos and videos of them is very much welcome.

Speaking of photography, while you might want to start snapping away, keep in mind that not everyone is there to perform. Some people just really want to practice — which is hard to do in a tiny apartment — so they head to Yoyogi Park. Even though it’s a public park, some people just want privacy. If you’d really like to snap a pic, there’s no harm in asking, but don’t take it personally if they say no.

Yoyogi Park is divided into two parts, separated by a road. ‘Section A’ is commonly known as the forest park area, while ‘Section B’ has an outdoor stage and stadium.

The forest park area is what most people think of when you mention “Yoyogi Park.” It’s the larger of the two areas and suitable for picnics and outdoor activities like skating and jogging. There are plenty of grassy open spaces and shady trees, perfect for relaxing under. In fact, the whole forest park area is very nature-y, with lots of different gardens, a pond with some fountains, and a bird sanctuary. There’s even an observation deck that gives you a view over the entire forest park area.

The smaller part of Yoyogi Park is less about nature and more about bringing people together. Home to an event plaza, outdoor stage, and sports stadium leftover from the 1964 Olympics, it hosts events throughout the year. If you hear of an event happening at Yoyogi Park, it’s probably being held here. And let’s be honest, there’s almost always an event of some kind happening at Yoyogi Park.

In between Yoyogi Park and Meiji Shrine is a small pocket of greenery, which fellow author Chris calls a ‘secret’ park. It’s actually part of the large forest surrounding Meiji Shrine, and is the more roundabout path leading to the shrine. If Yoyogi Park is too rowdy or mainstream for you, this area is a quieter alternative.

Things to do in Yoyogi Park

What you can do at Yoyogi Park is really only limited by your imagination (and what you’re willing to carry there). But that being said, the park does lend itself more to certain types of activities.

In the northern corner of the park, you’ll find the cycling center. It’s open Tuesday to Sunday from 9 a.m. to 4:30 p.m., with prices for an adult bike starting at ¥210 for the first hour. They even have tandem bikes, and bikes for kids (with training wheels), making it a fun activity for the whole family.

Exercise your dog at the dog run

This is one of the few places you’ll be able to let your furry friend off lead in Tokyo. The dog run is divided into sections according to the size of your dog, and once inside your dog is free to romp around. You do need to register ahead of time though, and part of that includes proving your dog has had its Rabies vaccination. If you don’t have a dog, this is a great place to dog-watch.

Join a fitness class (or work out by yourself)

On weekends especially, the forest park area of the park plays host to a good number of outdoor fitness groups and classes. You’ll find yoga, HIIT, and kickboxing classes, as well as casual games of soccer or badmington. Some groups might be happy for you to join on the day, but others might prefer that you reserve in advance. Similarly, whether or not participation is free depends on the group. Searching online on places like Meetup and other social media sites should give you a good idea of what’s out there. If fitness groups and classes aren’t your thing, you can always just stake out a spot and work out by yourself.

Given all the grassy open spaces, Yoyogi Park is a perfect place for a picnic. Depending on the weather of course — there aren’t many sheltered areas so be sure to check the weather forecast. Arrive early (before 10 a.m.) to secure a good spot, lay out your mat, and you’re set for the day. Seriously, despite how busy it can get, Yoyogi Park is a very chilled out spot for a picnic.

Where to eat and drink

Food options are a little limited within Yoyogi Park. There are three cafés but they’re quite spread out. One is located near the Harajuku gate entrance, one near the Sangūbashi gate (and dog run), and the other is near the event plaza.

If an event is happening, there will usually be food trucks and vendors at the event space. This is especially true for the cultural festivals — the annual Vietnam Festival, for example, will see pop-up stalls from many Tokyo area Vietnamese restaurants.

From time to time there are also food trucks, pop-up food stalls, or food vendors walking around the forest park area. If you’re picnicing or planning to be in the park for a while though, you’re better off bringing food with you.

Note: The nearest convenience store is at Harajuku Station.

There are great cafes in Harajuku if you need a pick-me-up.

There’s almost always something happening in Yoyogi Park. The park is home to many major events throughout the year including Tokyo Rainbow Pride, one of Tokyo’s biggest (though irregular) fleamarkets, and the Harajuku Omotesandō Super Yosakoi dance festival. There are also a good many international cultural festivals, such as the Philippine Festival, the Arabian Festival, and the Brazilian Samba Dance Festival, to just just a few.

In terms of seasonal displays, Yoyogi Park is pretty ordinary. While there is some lovely fall foliage, Yoyogi Park is not one of the Tokyo parks and gardens famous for fall leaves. There are a lot of cherry trees, but Yoyogi Park is popular for spring cherry blossom viewing mostly for its anything goes attitude.

Things to know before you go

Like many other parks and public places in Tokyo, there aren’t many trash bins around. There are a few large ones near most of the major entrances, but during busy periods these can get very full. Be prepared to carry your trash back with you either way. Smoking is permitted but it is requested that you refrain from it in crowded areas or areas where others might be impacted by secondhand smoke. On the otherhand, alcohol is allowed.

There are also a fair few water fountains and vending machines dotted throughout the park, as well as a few public toilets.

Since you’re already in the area, be sure to visit Meiji Shrine, one of Tokyo’s major shrines. If you like fashion and shopping, head over to Harajuku. Takeshita Street is a popular shopping street (often incredibly crowded on weekends). It’s a great place to pick up trendy clothes and accessories, as well as stuff your face with sugary, rainbow-colored cotton candy. If you’re into classier, more expensive things, go to Omotesandō. It’s on the opposite side of Yoyogi Park to Harajuku.

Getting to Yoyogi Park

The main entrance to the park is in Harajuku, just a few minutes’ walk from Harajuku Station, a stop on the JR Yamanote line. Use the Omotesandō ticket gates and the west exit. Coming from the subway, take the Chiyoda line to Meijijingūmae.

The park can also be entered via the West Gate, which is nearest to Yoyogi-kōen Station on the Chiyoda subway line.

What time does Yoyogi park open?

How much is entry into Yoyogi Park?

Entry to the park is free, however some events and festivals might charge an entry fee.

Can you barbeque in Yoyogi Park?

Unforutunately, there is no dedicated barbeque area in Yoyogi Park.

While we do our best to ensure it’s correct, information is subject to change. Last updated in October 2022 by Maria Danuco.