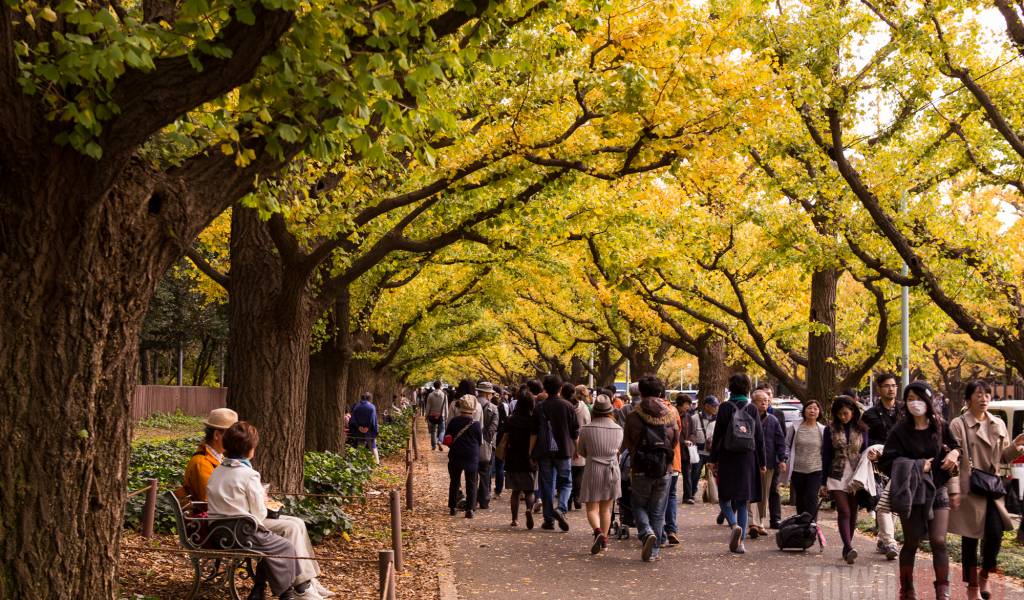 The fall version of cherry blossom, changing leaves transform Tokyo into an autumnal haven (even if you’re just popping to Lawson for some milk).

Koyo time is here! 紅葉, meaning the changing of the leaves, is an important seasonal marker in the land of FOUR (count ‘em!) seasons! While perhaps not quite as widely celebrated as cherry blossom season, the arrival of autumn leaves in Tokyo (from October to early December) is still an excuse to get out into the great outdoors and marvel at the stuff that Mother Nature does with her pigment palette. Here are some of the best koyo spots in and around Tokyo.

Rikugi Gardens (“en” means garden) is trying to have it all, and is succeeding, with their combination of autumn foliage and “illuminations” evenings.

The Edo-era landscape garden, a beautiful place to stroll while you mentally compose the next cryptic scroll message to your kimono-clad lover, is resplendent in this season and is artfully arranged for you to be able to snap that perfect picture.

A pretty regular street the rest of the year, this avenue transforms into an autumnal dreamland from late November to early December each year. Towering above the walkers beneath, the gingko trees are a fabulous golden color and provide the perfect setting for the annual Jingu Gaien Ginkgo Festival.

The 300m stretch is located on the south side of Jingu Gaien Park and is part of the larger area known as the Meiji Outer Garden. The distinctively-shaped leaves are found on many a Japanese school and family crest, notably Tokyo University (Todai) and Osaka University (Handai).

Once you’ve explored Meiji Jingu Shrine, head into nearby Yoyogi Park to see another vast collection of fiery maples and ginkgo trees doing their autumn thing. Tip: make for the south part of the park for maximum foliage.

If you want a really regal experience, head down to the palace. The Ninomiya Garden, a sub-garden of the East Gardens, is replete with Japanese maples (momiji) and a few ginkgos, bending gracefully over ponds and meticulously manicured topiary.

Get out of the city into the REAL nature and leave behind all those manufactured parks. Mount Takao is only somewhat manufactured, and by that we mean it’s well tended and carefully managed, but it’s still at least 35% wilder than any of the parks within spitting distance of downtown Tokyo.

Also, if you’re impatient to get your koyo on and Tokyo is just still too stinking warm, the mountains are sure to be a couple of degrees chillier and the leaves don their autumn robes earlier. During November there’s an autumn leaves festival—be careful you don’t miss it!

For more out-of-the-city koyo reveling, Mount Mitake is another great option. Its popular hiking trail is peppered with shrines, a temple, a village, waterfalls and a great view of the surrounding landscape.

This Japanese garden in the heart of Tokyo is a picturesque winner—so much so that on any given day you might find an artist perched on a flat stone by the pond finding her muse under a weeping cherry tree (whose leaves are certainly bright and pretty in their fall incarnation, though not as come-hither-y as the neighboring maples and ginkgos) or brilliant scarlet maple.

The whole scene is reflected in the glassy surface of the pond, and the skyscrapers in the near distance remind you that this kind of beauty exists side by side with the urban jungle that is Tokyo. Ah. Now to Instagram it all.

Hidden in plain sight, Mizumoto Park is one of Tokyo’s autumn treasures. Head to one of the biggest parks in the metropolitan area to take in the transformation of nearly 2,000 dawn redwoods (living fossils), reflected in the surface of the surrounding water. The park, which is in Katsushika Ward, covers more than 68 hectares, so crowding is not usually a concern.

Take a stroll through the ever-lovely Shinjuku Gyoen this fall to see exquisite maple trees and other autumn highlights. Seek out the Japanese garden and Momijiyama (“Maple Mountain”) in particular—and pack a picnic to enjoy on the sweeping lawns when you’ve had your fill of the foliage.

If you’re on the western side of Tokyo, set aside a day to explore Showa Kinen Koen—it’s well worth a ramble any time of year, but is especially beautiful during autumn. The huge park welcomes you with a display of ginkgos, and once inside you’ll see heaps of Japanese maples too.

Consider renting a bicycle and taking a slow meander along the extensive network of paths through the park.

So of course there are more than ten spots to enjoy the leaves—Tokyo is a big place after all! Here are some bonus ideas on spots to spend an autumn afternoon.

One of Tokyo’s very first public parks, Ueno is home to 8,800 trees and although it’s more famous for cherry blossom, it’s pretty stunning in fall too. Head to the gates of the Tokyo National Museum to see gingko and Zelkova trees or spot some maple leaves at Kiyomizu Kannon Temple.

You can boat on the lake amidst the leaves or stroll through the park grounds—both are pretty cute date ideas.

Inokashira is the park that has it all, and that includes autumn leaves. Whether you paddle past them on the boats or enjoy some streetfood beneath them, you can be sure to get all your fall feels in an afternoon spent here.

The park has a small zoo, performers at the weekend, a shrine and plenty of picnic spots. The park has plenty of momiji trees and golden-leaved cherry trees to admire scattered throughout the park.

Not as jam-packed with autumn leaves as other parks on the list, but that also means it isn’t quite as jam-packed with people either. Beautiful on a good day and even better in fall, the gardens have some maple trees—especially around the tea house and lake. The reflectsions help with the impact and you can sip on matcha while you enjoy the view.

A beautiful escape from the city, Todoroki is the only valley in Tokyo—forged by the Yazawa River and pleasingly untamed. Come autumn, the lush greenery is replaced with golden browns and deep reds—especially around the Todoroki Fudo Temple. As well as strolling along the waterside, you can enjoy some tea at the Setsuga Teahouse and forget you’re in Tokyo for a few hours.

Cheapo bonus: Looking to get out of the city? Check out our article on awesome fall day trips from Tokyo.

This post was last updated by Lily Crossley-Baxter on October 4th, 2018.

Hachioji Harajuku Jingugaien Katsushika Ome Otemachi Shinjuku Tachikawa Yoyogi
Written by: Selena Hoy
Filed under: Outdoors and Nature | Things to do
Tags:
Sharing
Questions or comments about this article?
Start a thread on our community forum
Ask our local experts about Tokyo