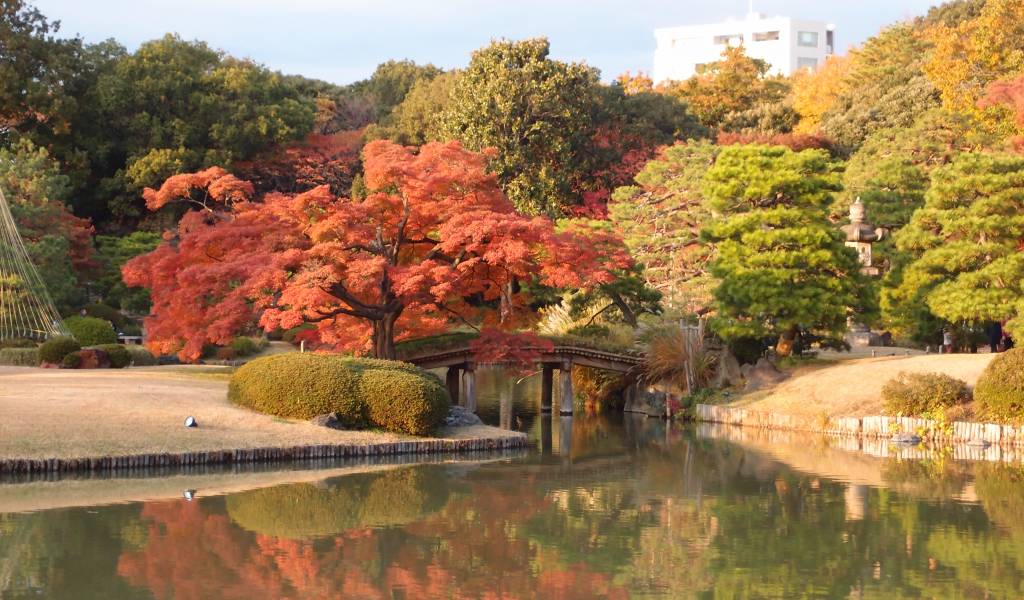 Meaning ‘6 Poem Garden’, Rikugien is often considered Tokyo’s most beautiful landscaped garden. Established by feudal lord Yanagisawa Yoshiyasu in 1702, the garden reflects 88 scenes from classical Japanese and Chinese literature. It has a traditional Edo-period design with a pond, small hill and trees.

After the fall of the shogunate and the abolition of the feudal system, the garden fell into disrepair until it was acquired in 1878 by the owner of Mitsubishi, Iwasaki Yataro. Subsequent generations of the Iwasaki family restored and maintained the garden until it was donated to the government and opened to the public in 1938.

Spread over 8.78 hectares (21.7 acres), Rikugien is one of Tokyo’s more spacious parks and takes roughly an hour to explore – longer during cherry-blossom and autumn-foliage viewing seasons. Fukiage Chaya, one of the tea houses constructed by the Iwasaki family, is located on the edge of the pond and serves traditional tea and sweets. Depending on the season, the tea may be either hot or cold. The menu includes barley tea for ¥150, amazake for ¥350 or matcha green tea for ¥510.

Seasonal flowers are a major attraction even in spring and summer, with plenty to explore and admire throughout the year. There are free guided tours in English on the first and third Sunday of each month starting at 11am and 2pm.

The gardens are open throughout the year except for a four day period from December 29th until January 1st. There are free admission days on Greenery Day (May 4th) and Tokyo Citizen’s Day (October 1st).