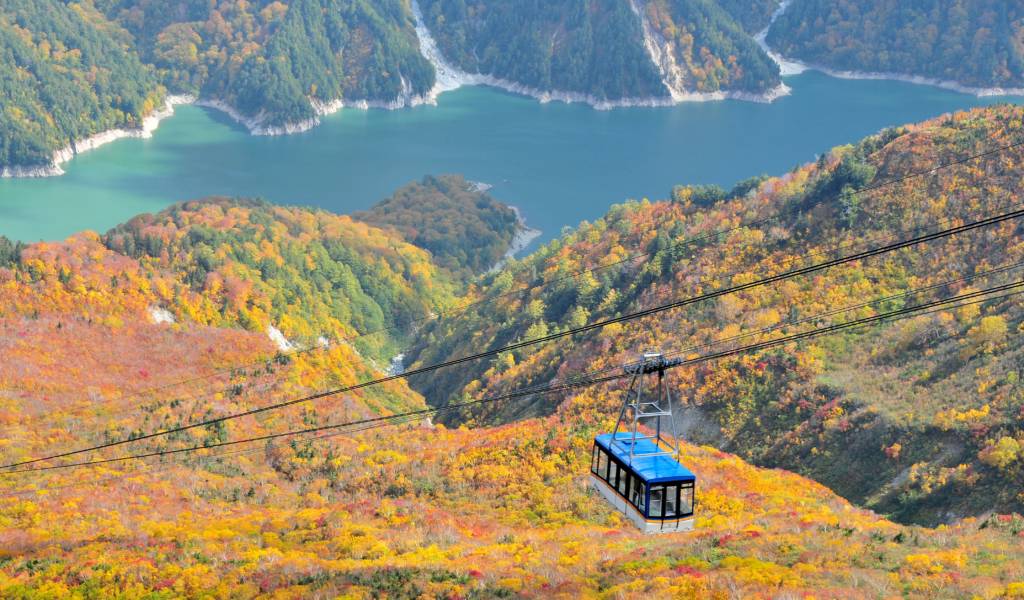 Autumn Day Trips from Tokyo to Give You Those Fall Feels

If parks just don’t do it for you, here are some great autumn leaves day trips from Tokyo to give you those fall feelings.

Autumn leaves give cherry blossoms a run for their money in our opinion—and what better way to escape the busy streets of the capital than with a relaxing day trip to enjoy them? Whether you prefer a hike, want an easy stroll or love seasonal festivals, there’s a Tokyo autumn destination perfect for everyone here.

The first 2022 forecasts have now been released by the Japan Meteorological Society, so we can all get planning our fall sightseeing.

1. Karuizawa and Agematsu: Famous bridges, golden ponds and a festival

Deep in the valleys of Nagano are plenty of beautiful autumn leaf viewing spots, from famous bridges to quiet towns. The easiest is Karuizawa, with a bicycle rental making the perfect method to explore the forests and streets.

Be sure to cycle to Kumoba Pond, which has incredible reflecting views of golden leaves and blue skies. You can also catch the Karuizawa-Kusatsu Line bus from the station to see the famous Shiraito Falls (pictured above), which are amazing throughout the year, but especially so in autumn.

Note: The Karuizawa Momiji Festival usually takes place from early October to early November, but it has not yet been confirmed for 2022 – keep an eye on the event below for details.

For a more natural day, head to Agematsu, an area famous for forest-bathing—and when better to do so than in the season of golden, amber and red leaves? The Kiso Valley is home to gorgeous landmarks such as Nezame no Toko, strange rock formations in the river bed, as well as many carefully preserved walking routes through the protected forests. Agematsu is a post town on the Nakasendo Trail, with traditional Edo-style buildings and an open-air logging train.

Getting there: Agematsu can be reached on the Chuo Line, with buses from the station taking you to Nezame no Toko or the forest.

A popular day trip throughout the year, Nikko really comes into its own during fall, with flowing waterfalls and mountains blanketed in golden-hued trees. There are countless falls, gorges, lakes and mountains to explore here, so take your pick!

The Kegon Falls provide one of the most stunning views in Japan during autumn, with water rushing down a 97 m drop from Lake Chuzenji. This is the highest natural lake in Japan, with views of Mt. Nikko and Mt. Nantai from the walking path surrounding it as well as from the ferry. The leaves here peak from late October to mid-November.

The Shinkyo Bridge is another popular spot for Tokyo autumn day-trippers—the traditional curved red bridge meets colorful leaves on either end as it crosses the bright-blue Otanigawa River. Slightly lower, the Nikko town area peaks from early to mi-November, slightly later than the falls and lake.

Alternatively, you could visit the Ryuokyo Gorge and walk along a 6 km nature trail with hot springs at each end. This area is expected to peak around mid-November.

Have a read of our full article on Nikko for more information, including discount travel passes.

Getting there: There are a few different travel discount passes available for the Tobu Line, or you can travel for just under ¥1,980 from Tokyo Station to Tobu-Nikko, taking just under 2.5 hours with two changes.

Enjoy the mountain views of Okutama while you stroll alongside the lake or rivers, feeling a million miles away from the frenetic streets of Tokyo. The Hikawa Keikoku Valley is a few minutes’ walk from Okutama Station, and there is a 4 km promenade along Nippara River, Tama River and Mt. Atago, with stunning views of the surrounding autumn leaves.

There are boat rides available across the lake, which is a whopping 45 km in circumference. With views of Mt. Kumotori, Kawanori and Gozenyama, you won’t be short of breathtaking moments, especially if you are a fan of hiking. You can take the 10 km Mukashi-Michi Trail from the station, which takes you towards the lake—it is a largely paved route, with some steep sections (catch a bus back from the lake if you prefer).

Although a popular summer destination thanks to the river activities, autumn is a stunning time to see the area, as towns string persimmons and weatherwise it’s still pleasant enough for a picnic!

Getting there: It takes under two hours from Shinjuku with one or two changes, depending on your route and costs around ¥1,100.

Although this spot is more famous for its impenetrable walls of snow, it is also stunning in autumn as the Tateyama mountain range undergoes a jewel-like transformation. The route stretches between Toyama City in Toyama and Omachi Town in Nagano, with incredible views of the Japanese Alps along the way. The highest points often begin changing color in early October, with the transformation reaching the lower areas from mid to late October.

The Murodo is the highest point, with walking trails of varying difficulty and incredible views. There is also a cable car and ropeways, as well as buses running along the alpine route—meaning you don’t have to do too much walking if you don’t want to.

The Tateyama Kurobe Option ticket offers a discounted price for foreign travelers only, including the bus from Nagano Station to Ogizawa and a one-way trip along the route. Although travel here can be quite pricey, if you have a JR Pass you can enjoy it without a second thought!

Getting there: Multiple routes via Nagano, Toyama or Shinano-Omachi, costing around ¥12,000 one way.

5. Mt. Takao: An easy hike with an autumn festival

November is set to be the Kanto region’s prime fall foliage period this year, and the Mt. Takao Momiji Matsuri is a great way to see more flaming-red maple leaves than you can shake a stick at. Mt. Takao, on the outskirts of Tokyo, is listed (by the Michelin Green Guide, no less) as one of the best places to see the momiji.

Even if koyo (autumn leaf viewing) doesn’t do it for you, you can hike the scenic trails, check out Biwa Falls, visit Takao Yakuo-in Temple and the Ju-Itchome Teahouse, get a delicious lunch, gaze upon the summit of Mt. Fuji (on a clear day), and soak your weary bones in an onsen, all within 50 minutes of Shinjuku Station.

Note: As of this writing, we have not yet confirmed if festival events (music and dance performances) will take place in 2022. In past years, many of the festival’s events were scheduled for the weekends. As well as many musical events, a highlight of the festival is sake served in the traditional square wooden masu, and an exhibition of Tokyo kokeshi (traditional wooden dolls).

There is parking available, but the area gets crowded, so it’s best to use public transport. The nearest station is Takaosanguchi Station on the Keio Line, and from there it’s a three-minute walk to the festival venue. There is a cable car and a chairlift to the top of Mt. Takao, as well.

Getting there: Mt. Takao is less than an hour from Shinjuku by train and costs just ¥390 if you stick to the Keio Line!

6. Lake Kawaguchiko: Views of Fuji and the Maple Corridor

You can kill two birds with one stone here: what better way to see Fuji than surrounded by stunning autumn leaves? The area is transformed with shimmery lake reflections and maple leaves galore ready to leave you in awe.

There is also a Momiji Tunnel near the Kawaguchiko Natural Living. Kawaguchiko makes for a great day trip whatever the season—here are some extra ideas for what to see.

Getting there: Trains and buses are available from Tokyo, taking approximately 2 to 2.5 hours, with tickets ranging from ¥1,750–¥3,900.

It helps that Kamakura is an awesome place to visit anyway, but throw in some spectacular autumnal leaves and you’ve got an extra-great day out. Due to the coastal location, the autumn leaves in Kamakura start to turn a little later, meaning the best time to visit is around late November to mid-December.

The famous temples and shrines of the area all look amazing with a backdrop of gold and red leaves, so be sure to visit Kotokuin Temple—the home of the giant Buddha, as well as the pathway up to the main hall of Hasedera Temple, which lined with beautifully lit maple trees in the evening.

Meigetsuin Temple is famed for a unique view through a circular window into the bright autumnal foliage, and Engakuji Temple is surrounded by aged trees glowing with fall colors. There are multiple hiking routes through the area if you want to get right into the forests.

Getting there: Between ¥500–¥900 from Tokyo depending on your starting station and takes around 1 hour.

While we do our best to ensure it’s correct, information is subject to change. Post first published in 2017 and last updated in September, 2022. Special thanks to Kylie Van Zyl for her contribution in the Takao section.

Hachioji
Written by: Lily Crossley-Baxter
Lily's Tokyo favorites are: Shirohige Cream Puff Factory, Anata No Warehouse, Todoroki Valley
Filed under: Outdoors and Nature | Things to do
Tags:
Sharing
Questions or comments about this article?
Start a thread on our community forum
Ask our local experts about Tokyo