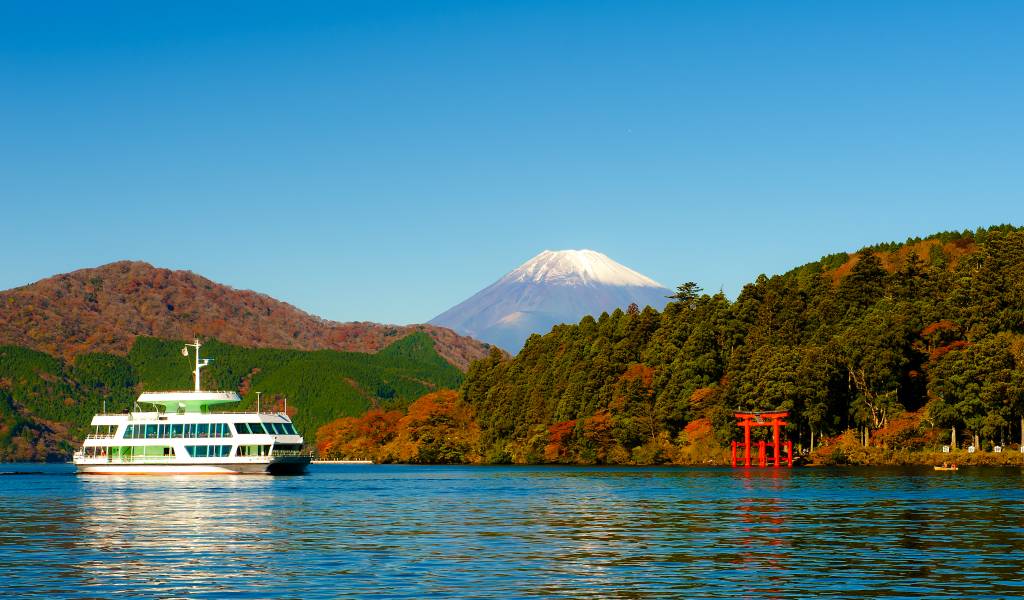 Tokyo to Hakone: Getting There and Back

Planning a day trip or weekend break to Hakone, the hidden hot spring (and art) paradise a couple of hours south-west of Tokyo? Here’s a quick guide to the various rails and wheels that will get you there, so you know which way to go, and how much it will cost. Your best bet is most likely something called the Hakone Free Pass, which gives you access to eight types of transport (one of which is the pirate ship you see in the photograph above), as well as discounts to all sorts of attractions in the area. But we’re getting ahead of ourselves—let’s begin with the basics. Tokyo to Hakone, here we go!

Hakone Safety Advice: Following increased volcanic activity and area closures in mid-2019, the Hakone ropeway has now resumed full operations and the Owakudani area can also now be visited, although some pathways are closed. As it remains a level-two warning area (determined by the Japan Meteorological Agency) it is advised that you check for updates before traveling – just in case.

Easiest way of getting from Tokyo to Hakone: Odakyu trains

By far the most comfortable and convenient way of getting from Tokyo to Hakone is taking the Odakyu Line from Shinjuku Station (central Tokyo). You can either take an express train, which requires a transfer at Odawara Station (tip: go see Odawara Castle en route to Hakone), or pay in a bit for a direct ride on the fancy-pants Romance Car (a limited express).

A regular express costs ¥1,190 one way and gets you there in about two hours. To get your butt onto the Romance Car, you’ll need to cough up an extra ¥890, and reserve your seat in advance (at either a ticket counter or machine). This option gets you to Hakone-Yumoto Station, the gateway to the broader region, in under 90 minutes. From there, you can take a bus or railway to whatever it is you want to see in Hakone.

If you’re heading to Hakone, it’s silly not to pick up one of these passes before you set off. Priced at ¥5,140, the two-day pass covers a round-trip on Odakyu express trains, as well as rides on eight types of transport in the Hakone area. That’s the Tozan train, bus and cable car, the ropeway, uber-kitsch pirate ship, and three other buses. Transport-wise, the only thing you’ll need to pay in for is the Romance Car. The pass also gives you discounted admission to over 50 attractions, including seven hot springs, 15+ museums and art galleries, and all manner of other places and services (including luggage porting). It’s a cheapo win.

If you have a JR Pass, you can get from Tokyo to Hakone using JR trains to save yourself some money. If you don’t have the pass, allow us to redirect you to the Odakyu options detailed above, as they are much quicker and simpler (as well as more economical). Since JR trains will only get you as far as Odawara (the Kodama and some Hikari shinkansen will get you there in about 30 minutes from Tokyo), it’s a good idea to grab a Hakone Free Pass to cover the rest of the way. The ones starting at Odawara are a bit cheaper than the ones that take you to and from Shinjuku.

Taking a bus to Hakone

The third option is to take a highway bus from Shinjuku Station. These are also operated by Odakyu, and are pretty comfortable. The journey, which goes via Gotemba, takes roughly two hours and costs about ¥2,000 one way. The Hakone Free Pass covers part of the journey. You can buy bus tickets at the Odakyu Highway Bus office in Shinjuku Station—you’ll find it at the West Exit, on the first floor. Buses run every 30 minutes, but it’s best to reserve your seats in advance. There are also a few buses running from Haneda Airport to Hakone, via Yokohama, as well as Tokyo Station to Hakone. These terminate at Togendai.

Before you dash off to Hakone, it’s a good idea to plot your sightseeing routes—especially if you’re considering busing. This will make your choice of transport easier. Our advice, however, remains firmly that the Odakyu trains are your best options for a Hakone holiday.