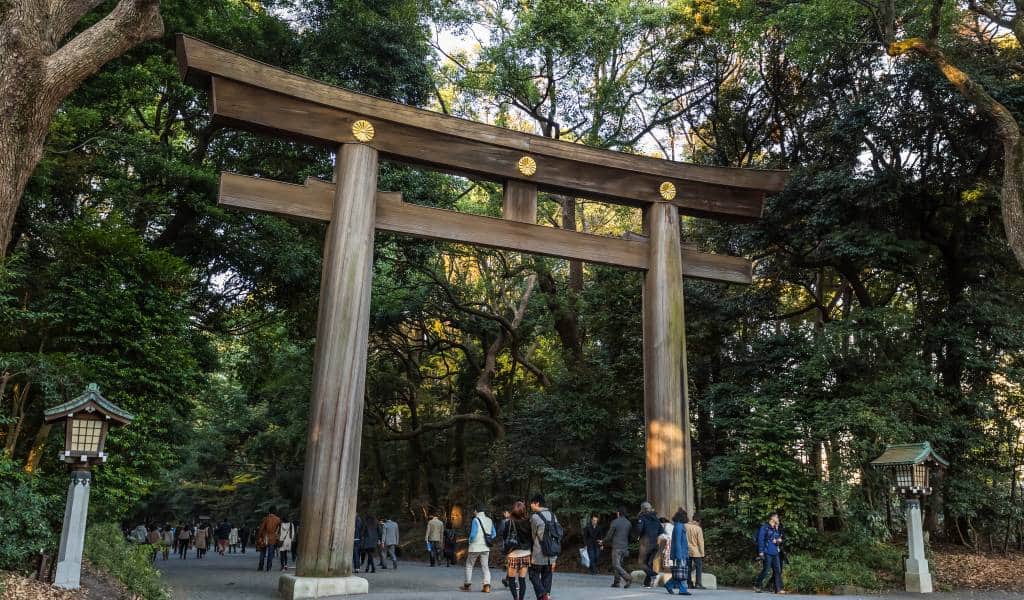 Surrounded by cedar forests and beautiful gardens, Meiji Jingu has an austere grandeur that serves as the perfect escape from the crowds as well as an intriguing history of welcoming the West.

Founded in 1920 to commemorate Emperor Meiji and his wife Empress Honten, it is now the most visited religious site in Japan, drawing crowds of up to a million on special occasions.What gives Meiji its charm, however, is the dedication to the philosophy of the Emperor it commemorates: the harmony of Japanese spirit and Western knowledge. Having presided over the opening of Japan’s borders to the world and being a staunch supporter of industry and development, Emperor Meiji left a strong legacy and helped create the Japan of today. Throughout the shrine are tokens and gestures to this belief and it turns an impressive but simple shrine into a much-loved and fascinating reflection of Japan.

Having ascended to power at the tender age of 15, Emperor Meiji was extremely popular, as was his wife—the Empress Honten during his reign as the 22nd emperor. She was a keen promoter of national welfare and women’s education, and died two years after her husband. Although the couple are buried in Kyoto, following their deaths it was agreed that the shrine would be built for their souls to rest in, with plenty to commemorate their achievements. The presence of the 22nd emperor and his consort are still felt in the area, with fortunes using their personal waka poetry, museums displaying their possessions and annual celebrations of their lives.

The original buildings were mostly destroyed during the bombing raids of World War 2 and rebuilt in 1958, but the Shukeisha and South Gate survived.

The huge surrounding forest was created in memory of the emperor and empress for their souls to dwell in and was planted entirely by hand.

All 10,000 trees were donated to their memory from across Japan and the world, and was carefully planned to form an eternal forest. There are now over 170,000 trees and it is hard to distinguish from a natural forest with dozens of different endangered species calling it home.

Suggested Activity
Book a Hands-on Kintsugi Experience
Looking for a totally different experience in Tokyo? Take a class in kintsugi - the revered Japanese art of repairing old pottery. Stemming from a belief that breakage is part of the history of an object, rather than a reason to throw it away, your class involves fixing damaged items with lacquer mixed with gold. It's a unique lesson - and an equally unique ...
Click here for details

There are two areas of the shrine, but the central is the most important for visitors. The inner precinct covers 700,000 square meters and is called the Naien. It mainly includes the shrine buildings and the Treasure Museum as well as the surrounding gardens and forests. The Gaien is the outer precinct which stretches out to include the Meiji Memorial Picture Gallery, the nearby National Stadium and the Meiji Memorial Hall which is often used for meetings and weddings. Unless you have a keen interest in stadiums and very long walks, we suggest you stick to the Naien…

Stepping into the inner precinct

Once you turn into the cooling forest, towered over by ancient cedar trees and hopefully a cool breeze if it’s summer, you will see your first looming torii gate. Standing tall at 12m, the gates are made from 1,500-year-old cedar wood and represent the entrance to a sacred ground, where the everyday should be left behind. Once you reach the gate, you should bow once to it before stepping through, if you are keen to follow tradition.

Kazaridaru: From France and Japan

Further into the forest you’ll notice two walls of decorative barrels, the first display of the dedication to combining values and traditions of Meiji himself. Perched on top of each other, the sake barrels are each covered in designs and names of breweries.

Called Kazaridaru, they are bound in straw and displayed at every shrine, having been donated by sake brewers. Sake is intrinsically tied to Shinto religion and practice—the brewers donate the sake used in ceremonies whilst the shrines conduct rites asking for the brewer’s prosperity. While most shrines accept donations form local brewers, Meiji Jingu and Ise Jingu accept donations from every brewer in the country. With over 1800 brewers in Japan, this requires careful coordination and brewers often provide a token bottle or empty barrel rather than overloading the shrine.

The second display, however, is not of sake, but of French wine from Bourgogne—donated and displayed as a reminder of international ties. Emperor Meiji would encourage Western culture in everyday life and would often drink wine with his meal as well as wearing Western dinner clothes.

The central complex and courtyard

The spacious main complex will give you a sense of breathing space like no other, allowing you take take in the view of the impressive Hoden directly ahead (when not obscured by selfie sticks).

To your right is the Kaguraden, the hall of Shinto Music and Dance which is used for performances. On the same side is the Nagadono Juyosho—the amulet office where you can get stamps for your shrine book, lucky charms of fortunes (more on that below). There are plenty of benches for a rest in the shade (definitely needed in the summer) and you can take your time reading people’s wish-inscribed ema, or adding your own.

The Honden is built in the Nagerezukuri style using Japanese cypress wood and copper and you can pray if you like, following the simple steps below. The inside of the temple is stunning with amazing decorations, but the general rule for photography is that if there is a roof above you, no pictures.

If you visit on a Sunday, you are quite likely to see a wedding procession solemnly making its way through the courtyard. There is a sacred rope attached to two-century-old trees to the left of the courtyard for couples who wish to pray for a strong relationship. Since the shrine is equally dedicated to the empress, and their mutual strengths are recognized and dedication reflected in gardens, etc., it should be a pretty good place to ask for luck!

Treasure Museum (Homotsuden) – ¥500: Personal belongings and clothes of the two as well as portraits of emperors. The current exhibition has the magnificent horse carriage used by the emperor himself 120 years ago. The design is reminiscent of the Japanese National Treasure House in Nara and was completed in 1921. Please check before you visit as the treasure house is currently undergoing earthquake-proof construction and will open again shortly.

The Treasure Museum Annex (Homotsuden-Tenjishitsu) is a more modern building which has exhibitions as well as a snack bar, a souvenir shop and other conveniences. Despite being called the annex, the two treasure halls are at opposite ends of the park and are about 15-minutes walk away from each other.

The Meiji Jingu Inner Garden is one of the oldest parts of the precinct and some parts of the gardens were actually designed by Emperor Meiji himself for his wife’s enjoyment. The iris garden, tea house, small paths and fishing spots were created for her invigoration and the garden takes on new life with every changing season.

You can see azaleas in spring, 150 species of iris in summer, autumn’s leaves and snow-covered yukitsuri protecting pine trees in the winter. If you’re lucky you may spot a tanuki napping on the grass or scampering through the gardens—the raccoon-type animals live here and are pretty cute as well as being prominent in Japanese folklore. Entry to the gardens cost ¥500.

The legend of Kiyomasa’s well

Said to have been dug by Kato Kiyomasa, a famous feudal warlord who lived in the area during Edo times, the well has grown in popularity relatively recently. It has gained quite the reputation as a powerspot following appearances on TV shows where people claimed to have had good luck after visiting and keeping the picture as their phone background. The well is the fountainhead of the south pond and is located in the inner gardens which require an entry fee.

Similar to any other shrine you may visit in Japan, there are some simple rules to follow for a respectful visit:

Choose your ema: these are wooden tables you can write wishes on for the future. There are two kinds, the Kigan-ema which has the crest of the shrine on, and the Eto-ema which has the zodiac symbol of the year on. You can either hang your ema from one of the wooden hooks around the camphor tree on the Eastern side of the main shrine building, or you can take it home.

Good-luck charms: You can get many different omamori, for things like safety, health or study—you tend to keep them until their purpose has been fulfilled. If you choose one that is a small bag, it is not meant to be opened—it has a small emblem of the shrine inside, called an ofuda.

A hand-printed goshuin is a memorial seal available for shrine books, and has the emblem stamped and the date inscribed by hand. You can have it done directly in your shrine book, or you can have a single sheet. There are also free stamps in the shrine for regular books or notepaper if you would like a souvenir.

Fortune: You can collect your omikuji in Japanese or in English and see what the world has in store for you in the future. The shrine has chosen 10 waka from the works of the Emperor Meiji and the Empress Shoken in order to provide visitors with the divine grace of the imperial couple. You can find the English fortunes in a box right in front of the main building.

Host to a lot of great festivals, performances and celebrations, it can be a great (but busy) place to see some of Japan’s traditions in action. There are certain days that attract upwards of a million people—for example the Emperor Meiji’s birthday and New Year’s Eve/Day.

They have detailed schedules (link in Japanese) of all events taking place including times for the spring and autumn festivals and main anniversaries. Some of the main dates are as follows: