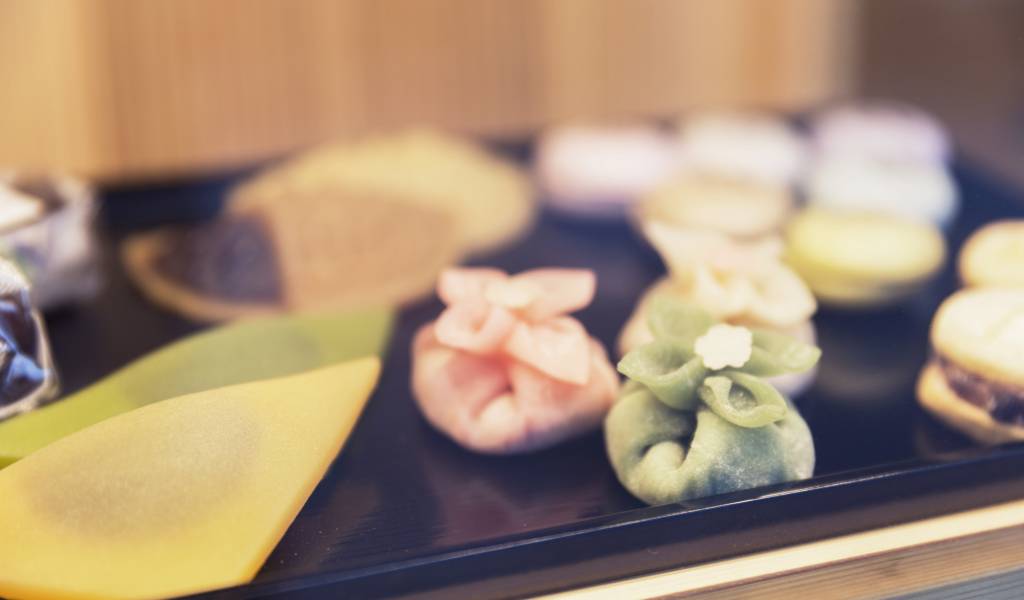 Wagashi: The Japanese Sweets (Almost) Too Beautiful to Eat

Beautifully crafted, delicate and delicious, wagashi might well be your new-found obsession in Tokyo, and we wouldn’t blame you one bit.

Whether you see perfect cherry blossom decal in spring or the warm oranges of chestnut in autumn, wagashi are one of those little treats in life that never fail to bring a smile to your face. Crafted to be as pleasing to the eye as to the tongue, the miniature perfections are often paired with green tea. Typically made from plant ingredients, there is an element of simplicity to them, and they often reflect this in designs inspired by nature. With dozens of different types, from crystallized sugar to steamed buns, you can do some real experimenting to find your favorites—life is a trial sometimes. Many will feature the ever-popular (in Japan at least) anko—red bean paste that is sweet and looks (deceivingly, some might say) like chocolate from a distance.

The introduction of sugar from China was a game changer. Sugar was a common ingredient by the end of the Muromachi period and wagashi became popular in the Edo period when tea was imported from China along with Chinese confectionery. Nowadays you will see street stalls, convenience stores and fancy department stores selling a myriad of sweet treats, all waiting to be savored and enjoyed—from street food like taiyaki to seasonal treats like sakura mochi.

Some popular ones to keep an eye out for include:

There are plenty of variations though, so experiment where you can and see which you like best. Namagashi is the term for fresh wagashi, and relates to the level of moisture in them (meaning they won’t last as long).

Where to find wagashi in Tokyo

Ubiquitous as they are, some wagashi are better than others, and there’s no reason to settle for a FamilyMart version when you could enjoy a luxury one for a few yen more. You have a few options, with specially devoted shops selling the sweets alone, or tea houses serving them with green tea. If you would like to experience them in their natural habitat, choose from our list of tea houses in Tokyo. Otherwise, here are some of the best spots to get your sweet tooth its fix.

A local favorite with queues snaking from the door a common occurrence, Gunrindo is renowned for its mame-daifuku: red bean paste wrapped in mochi with slightly salty whole beans kneaded in. The complementary flavors are unlike anything you’ve tried and are addictive, so maybe get an extra to take home with you (or three)—t only 170 yen each, there’s nothing stopping you! Thanks to their reputation, they simply close up when sold out of the day’s supply though, so head over early to avoid missing out.

Founded in 1899, Akasaka Aono has been perfecting the art of wagashi for over a century, and you can tell. With a variety of treats including mochi and yokan, this is an excellent place if you’re looking for a gift, as they wrap them beautifully. Collections of mochi, warabi mochi and their signature Akasaka mochi (made with brown sugar and walnuts) are packages in furoshiki (Japanese fabric wrapping) and they were the first store to use this wrapping method. It is a tad pricey, so if you’re looking for a small token gift you can get a three-piece of the specialty for just under 700 yen in a mini-wrapping. As this store also sells a variety of namagashi (the fresh wagashi) it also has an eating area to avoid customers eating them on the street. You can try dango here  for a little over 200 yen and keep an eye out for seasonal special editions!

With 500 years of experience creating the most delicate of wagashi, Toraya would originally only serve their sweets at the Imperial Court. Luckily nowadays they are available to the public and you can enjoy them yourself at one of the eight locations across Tokyo. All but the Nihombashi branch have a cafe inside, although their flagship Akasaka store is undergoing refurbishment until 2018. The stores are a pleasure to browse, with beautiful creations and plenty of options if you’re looking for a gift. If you have time to dine in, try their Anmitsu—the bowl of anko, agar cubes and fruits in syrup.

One of the simpler and more comfort-foody kinds of wagashi, dorayaki is the favorite of children’s character Doraemon. Credited with inventing the double-layered version which is now commonplace, Usagiya is a popular spot for the dedicated dorayaki fans and a good place to start your love affair with the treat. The sweet pancake is filled with anko and is almost impossible to beat when eaten warm and fresh from the store. Established in 1940, they sell the ‘Big 3’ types: plain, turtle and Higashijujo Sougetsu. They sell a variety of other treats too, so you can try a sample while you pick up your dorayaki!

Known for their seasonal designs, Shiono’s treats look (almost) too beautiful to eat. With a wide variety from small sugar sweets to fresh mame-daifuku, warabi-mochi and dango, this is a great place to go if you want to try a bit of everything. Their prices are a little high, but you’re paying for quality—with each larger fresh piece costing 370 yen. The produce 12 kinds of seasonal sweets each month so there’s always a good reason to visit again. They also produce special boxes for Japanese festivals such as New Year and Setsubun, in case you’re looking for something specific.

Known to be the foody havens of Tokyo’s underground levels, depachika have pretty much every type of food you can imagine, and wagashi is no exception. Although there tends to be a focus on European desserts, there are still plenty of places offering top-quality Japanese confectionery too. From the simple pleasures like mochi to beautifully presented gift boxes, you’ll find whatever it is you need, and more than you didn’t even know you wanted. Whenever you find yourself in a large train station or near a department store, you’ll no doubt find a depachika below it, so have a look at our full guide to find out which are closest to you.