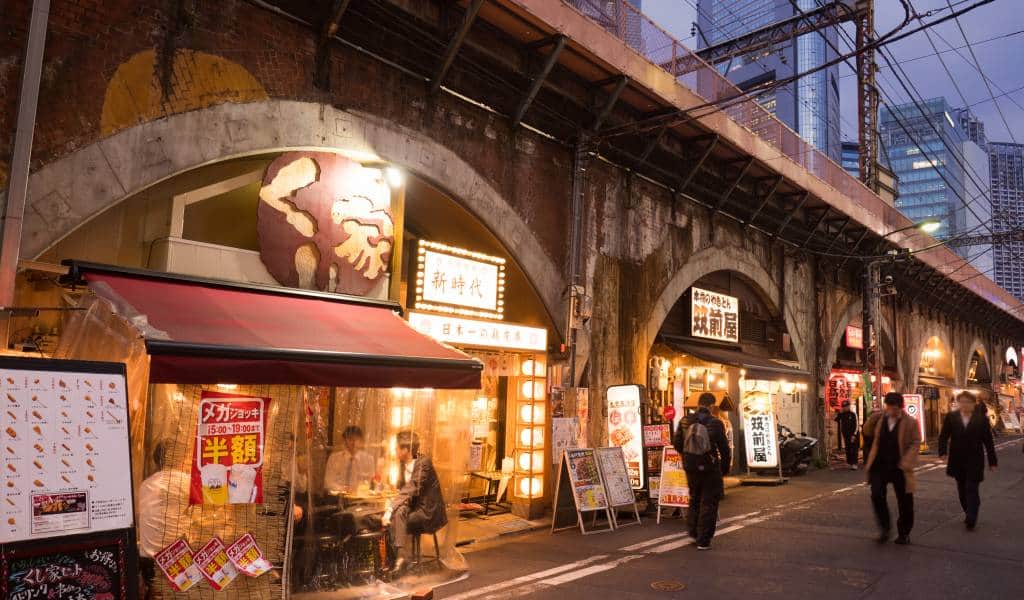 Shinbashi is the salarymen capital of Tokyo; so that means one thing—it’s full of people and it’s one of the most hectic parts of the city come rush hour. Outside of the commute, it’s a hub for some of the most rustic izakaya in the city and boasts great entertainment. With its super central location and heap of bars that are well dispersed over the area, it’s a popular hangout spot. Shinbashi also happens to be home of the oldest ‘pink cinemas’ which started the beginning of the very successful porn industry in Japan. Take that as you will. On a very different note, Shinbashi is also known for being Tokyo’s first railway terminal.

The area is just south of Hibiya Park and the Imperial Palace grounds.

What to eat and drink in Shinbashi

Shinshuu Osake Mura is the place to be on a Friday night in Shinbashi. It’s very busy so expect queues when ordering drinks, but the selection of beer is said to be very impressive here. It even considers itself to be a local sake museum! Good music, an interesting decor and that essential feature air conditioning for the summer months—this place is a winner.

Shinbashi Dry-Dock is another one of those distinctive beer joints in Tokyo. The owner has a great selection of lager on offer, but there is also a heap of wine to choose from too. There are also over 60 bottled beers, if you’re a beer drinker. Spoiled for choice, hey. There are the Japanese pub foodie classics (random as they are) on the menu too, such as fried chicken, hot dogs and ‘Napolitan’ spaghetti. It’s advised to book ahead though if you want to grab some food here too.

Shinbashi proudly presents eateries for a range of budgets. But this is Tokyo Cheapo right? So here are your budget restaurants to go to! The big one for cheap eating is the New Shinabshi Building. This is a building on the west side of the JR Shimbashi Station and has multiple izakaya in the basement. They can get quite smoky and cramped—and a word of advice: if you don’t like the smell of broiled fish, maybe avoid here!

Going on to more mid-range options, we have Don Blanco. This is as Mexican as it gets for Tokyo. You’ll find this foodie joint two minutes southwest of the train station and is the most authentic Mexican food you’ll get in the capital with the owner actually making regular trips to the country! The range of burritos is impressive, as are the homemade tortillas. Go here for something different and if you’re craving another cuisine.

What to do in Shinbashi

Shinbashi’s most distinctive feature is the display of the steam locomotive at the SL Plaza that is situated outside the Hibiya Exit of the JR Shinbashi Station. It is made up of a C11 292 model steam train and was constructed by Nippon Sharyo back in 1945. Still standing strong, it is a popular meeting place, so expect this area to be busy after working hours. At the end of the year, the landmark is very sweetly decorated in a dancing light display.

Another top thing to see in this area is the Karasumori Shrine, which has a grand history dating back to more than 1000 years to the Heian period. It is a small shrine, but that doesn’t take away from its beauty. There are all the traditional features that you would expect from a Japanese temple. There is a local festival here in May too.

Get your sake fix at the Sake Plaza. Explore anything and everything related to this Japanese drink at this joint. Unfortunately it’s closed at the weekends and on bank holidays, so is a must for a weekday itinerary . It is a complex comprised of four floors and is run by the Central Brewers’ Union. You can find cups, books, glasses, hydrometers and of course the drink itself. ¥315/515 will allow you to try either 3 or 5 sake and these change everyday, so you never know what you’re going to get. A must for any sake drinker.

Where to stay in Shinbashi

Hotel Sunroute Shinbashi is a top place to stay in the area. It is reasonably priced in the center of the neighborhood. Rooms are compact, but clean and comfortable too. With standard room features including free wifi, this hotel is key for its super close location to Shinbashi Station. It is also surrounded by restaurants, bars and convenience stores.

Tokyu Stay Shinbashi is a hotel that has only just opened in 2014. Located south of the station, it is within walking distance from the station and there is a bus stop out front of the hotel, so has good transport links.

Check In Shinbashi is only three minutes away from the train station. It is a small place for accommodation being quite cramped, but it is tolerable nonetheless. The rooms are fully equipped but go for the old-school style internet option of using LAN in all the rooms. Singles go from 7,500 yen, doubles from 10,000 yen for weekend rates. Interestingly, expect weekday rates to be slightly higher than this.

All Articles about Shinbashi
Do you want all our best tips on Tokyo? Download our ebook guide!

Things To Do in Shinbashi