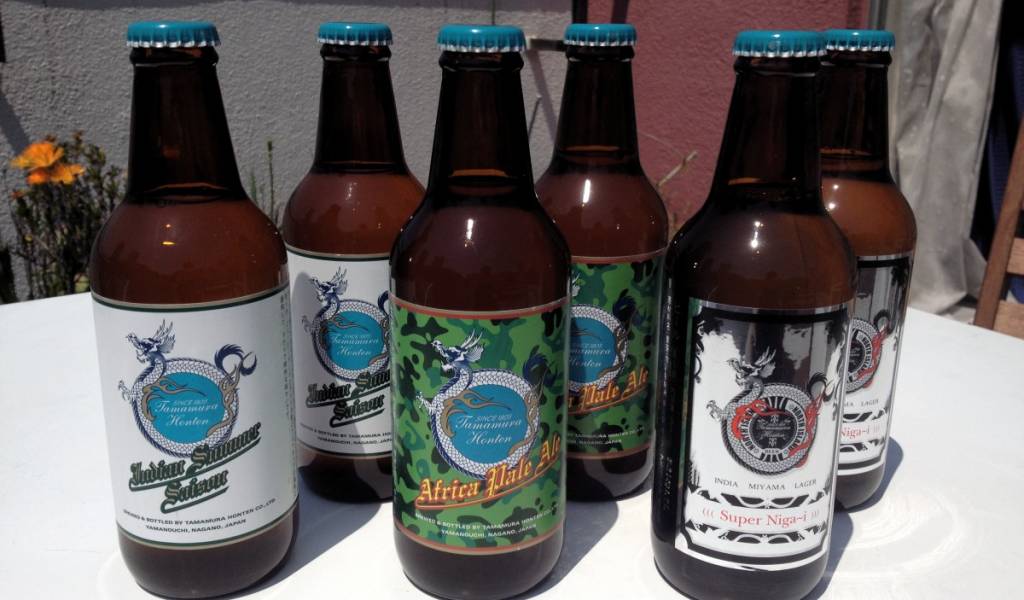 The barman means business. There is a big, thirsty Friday night crowd in at Shinshu Osake Mura and making sure everyone gets a satisfying fill of quality alcohol is a serious task.  The Japanese businessman at the counter in front of me seems to be dithering in his order and the long line of patrons waiting to order don’t seem particularly impressed.  The businessman eventually asks for a recommendation and gets his three very generous glasses of Nihonshu in a wooden holder, and then it’s my turn to order.

In my (admittedly not very cheapo) hobby of sampling as many Japanese craft beers as possible,  I’d come across what I thought was a particularly good beer – Shiga Kogen – and I also thought I’d found a place to pick it up for a reasonable price. I was soon informed by a friend that the beer could actually be picked up cheaper than wholesale at a bar – Shinshuu Osake Mura.  Shinshu, is the former name for what we now call Nagano Prefecture and is one of the major producers of craft beer, nihonshu and even wine in Japan. Shinshu Osake Mura (Shinshu Alcohol Village) bills itself as a ‘Local Sake Museum’.  Calling it a museum is apt as it’s all about the booze – everything else (music, decor, good air conditioning, seats) is a distraction.  Finding the place is also something of a mission – it’s on the ground floor mall of the Shimbashi Ekimae Building. If you exit Shimbashi Station, look for a sprawling building that looks like the future of architecture circa 1968. If that isn’t enough of a clue, there is a big statue of a tanuki in front of the entrance.

So how much? A complete range of the standard Shiga Kogen beers is available for 390yen – that’s more than 20yen cheaper than you can get it at Bic Camera’s discount alcohol corner. You can also pick up Yonayona from Yaho Brewing for 260yen, Ao Oni and Tokyo Black for 280yen – the same price that it goes for at Yamaya.  Additionally, they have slightly more expensive beers from Oh!La!Ho! Brewing, Minami Shinshu Beer, Kisoji Beer and Hotaka Beer.

I’m not a big nihonshu drinker, but the jizake tasting set for 1,100yen is extremely good value – especially when you consider that a single glass costs 700yen.

Although the store was packed with a mix of Japanese and non-Japanese drinkers the first time I visited Shinshu Osake Mura, on later visits I had a chance to chat with the bar staff. Despite the serious appearance, they are lovely people who are hugely enthusiastic about the beer and nihonshu they are selling. The aforementioned barman speaks English enthusiastically and is happy to explain the various drinks and how they are made.

Given their huge range, you’re likely to taste beer and nihonshu that you’d like to drink again. Luckily, Shinshu Osake Mura aren’t just a regular bar – you can also buy beer, nihonshu and wine to take home. Hightly recommended is their members club – free to join and you get 5% off all purchases. You’d be a mug not to sign up for it, even if you’re just visiting Tokyo.