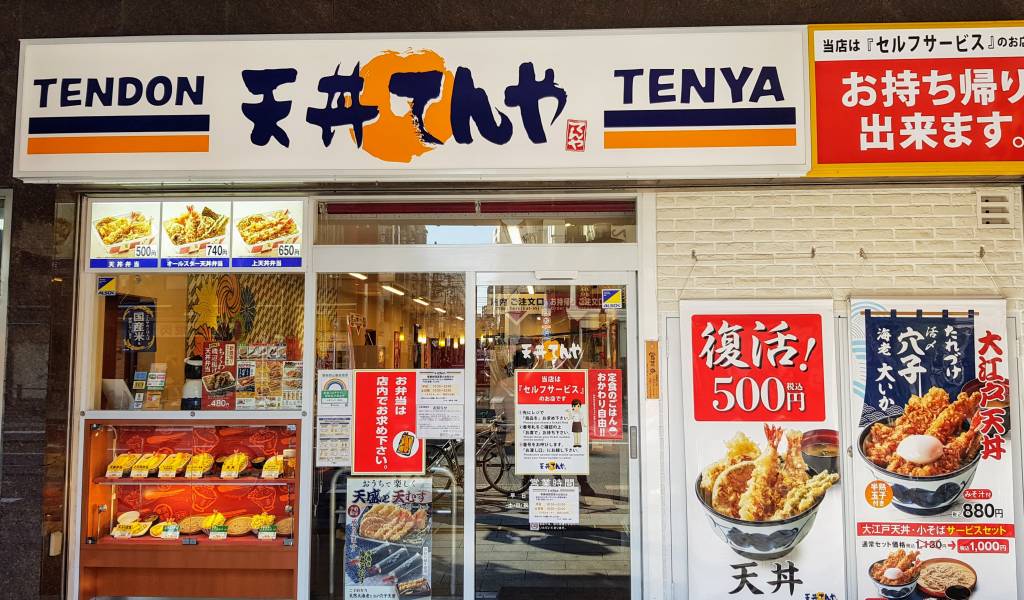 Adopted and adapted from a Portuguese recipe in the 16th century, tempura has become a signature part of Japanese cuisine. Thin slices of veggies and seafood are lightly battered then deep fried, and the (ideally) hot and crispy product is served on rice, soba or udon noodles. When it comes to chomping this tasty stuff in Tokyo, it doesn’t get much cheaper than Tenya.

Like most things in Japan, tempura has become something of an art. You can savour top quality stuff, ultra fresh and handmade, at a classy inn or fancy restaurant – and if you have yen galore, you should – but you can also experience a budget version that’s not half bad (and no, that doesn’t mean that it’s more than half bad).

It may have been dubbed a “soggy greasebowl” by certain other Cheapos, but I’ve been pleasantly surprised when I’ve eaten at Tenya, finding it both wallet and tastebud-friendly. The restaurants are simple, in a similar style to Matsuya or Coco’s curry – not exactly the type of place you’d take someone on a date, but clean and sufficient for a quick meal.

500 yen will get you their classic “One Coin Tendon” – a small assortment of tempura (usually squid, a small piece of fish, eggplant, prawn and green beans) on rice (the “don” part), with miso soup on the side. If you’re not that hungry, you can save 50 yen by asking for a small serving of rice – or if you’re starving, you can get a big portion for 100 yen extra. It’s a better idea to fork out 180 yen extra (so your total is 680 yen) for a set  instead though – you’ll get a mini veg dish and free rice refills.

Every month on the 18th, the One Coin Tendon is discounted and becomes a “san kyuu” don at 390 yen. Tenya evidently like word play – they apparently chose the 18th for this special because the figure can be broken down into “ten” and “ya” (a Japanese reading for 8). Punny, but perhaps they should stick to the fried stuff.

If you’re after something more substantial than the standard tendon bowl, you can get their “All Star Tendon”, which has more and fancier tempura, for 720 yen. It comes with miso too. Vegetarians can get the Vegetable Tendon for 520 yen, which typically includes lotus root, sweet potato and mushroom tempura, though some of the ingredients vary with the seasons. If you’re a strict vegetarian, keep in mind that seafood will probably be fried in the same oil as your veg.

There are a bunch of other “don” dishes and tempura sets – including soba and udon options, though these are a bit pricier. You can also get your order as a takeaway bento box.

You can add extra tempura to your dish – green beans are 40 yen, pumpkin and eggplant 70 yen, squid (which was my favourite) 100, and prawn 210 – the priciest option. There are also a few small side dishes – a tiny salad for 120 yen, cold tofu for 100 yen (ask them to take off the katsuo flakes if you don’t eat fish), and eggs for 60 yen a piece. A word of warning – the eggs are only half-boiled (on purpose – it’s a Japanese thing), so if you don’t like them runny, steer clear!

Tenya punts their tempura as “authentic”, but it does get fried in special “auto-fryers”, which we suspect churn out masses of the stuff , every day. For this reason – and on the advice of my ever-reliable back massage guy – it’s probably better to go early in the day (or find out what time they change their oil, and go straight afterwards). Think a mid-morning lunch, rather than a greasy late-night dinner.

Cheapo Tip: Check for coupons on their website before you go – they often have specials on.

Random fact: Cheapo tempura coming to a country near you – Tenya is looking to open stores outside Japan.