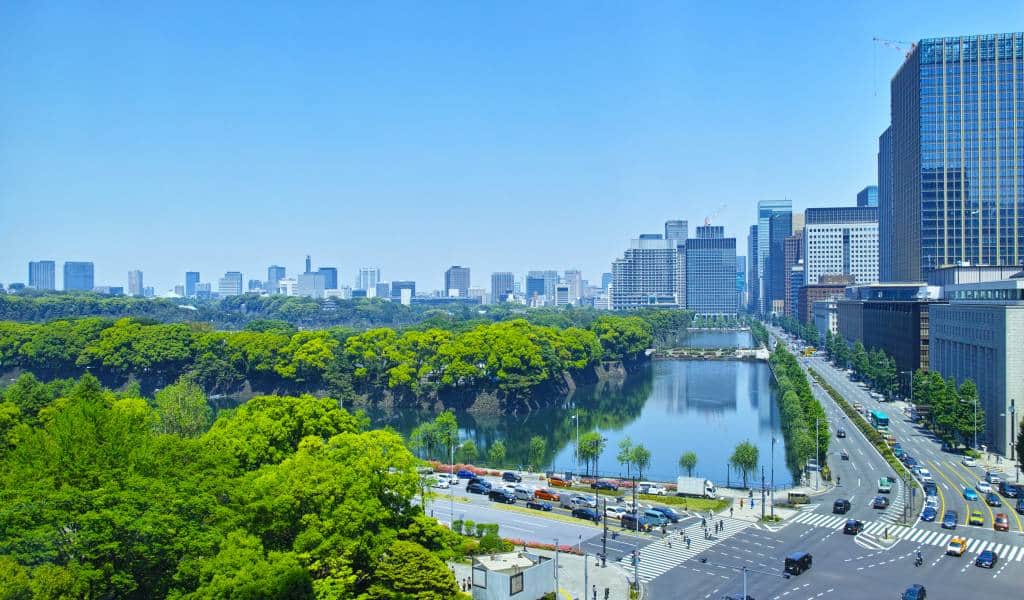 Hibiya is a little slice of Tokyo that lies between Hibiya Park (a great spot for picnics and bento) and Yurakucho. But while it’s small in size, it’s big on politics. You can see just about every important national government building around here. It’s also got its quirks, like the tiniest Godzilla statue you’ll ever see.

Where to eat and drink in Hibiya

A good place to find food is on the street of restaurants under the Yamanote Line tracks close to Yurakucho. Known in Japan as Gado-shita (meaning ‘below the girder’), it just goes to show that Japan does NOT waste space. They’ve got everything from izakaya to foreign cuisine, as well as great atmosphere.

At the Imperial Hotel in front of Hibiya Park, you’ll also find lots of fine dining (and shopping). Built by an emperor, the ‘Imperial’ is a dead giveaway that meals are big on luxury AND price. Not a real cheapo habitat, but definitely delicious.

What to do in Hibiya

Hibiya is a great place for just walking around. You can go to see the Imperial Palace East Gardens and see the remaining ruins of Edo Castle. Another beautiful park is Kokyo Gaien, which surrounds the palace’s main entrance. Warning: you can’t enter some parts of the park for security reasons.

We recommend also stopping by Hibiya Park, the first Western-style city park built in Japan (founded in 1903). It hasn’t changed much since then, which you can tell from certain details like the water fountains for horses. Many big festivals are held here annually. There are international festivals celebrating tons of different countries, as well as Bon-odori. They also have Oktoberfest and a Christmas Market.

The performing arts are also a big part of the neighborhood. One of the area’s major theaters is the Imperial Theater, which usually hosts productions of Western musicals. Another is Nissay Theatre. Its start goes back to the 60s, and now it’s a great place to see musicals and opera performances. And the famous Takarazuka troupe’s Tokyo theater is also here.

Where to stay in Hibiya

Hibiya is pretty central, but train-wise it’s actually not very accessible. That’s why we recommend staying somewhere else so that it’s easier to get around. You can stay at the Imperial Hotel if you want, but as we said before, the price tag of a night here goes pretty high by cheapo standards.

All Articles about Hibiya

Things To Do in Hibiya