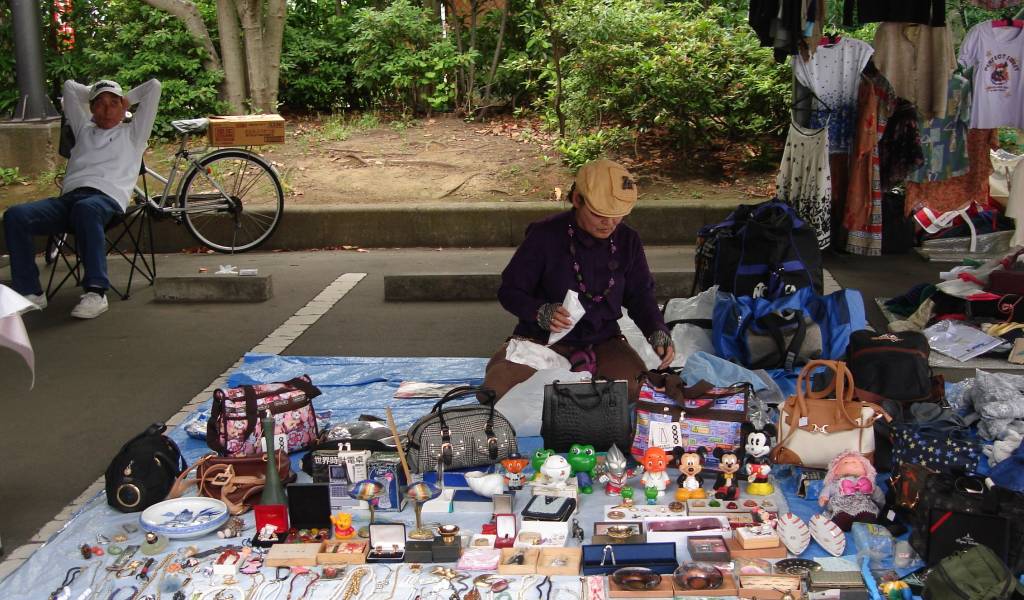 Tokyo may seem shiny-shiny and new – and parts of it are. It can feel like everyone has new stuff all the time and you certainly wouldn’t be the first one to look, agape, at what people are putting on the curb for trash pickup. In a country that honors tradition and has such a long history, it can sure appear like Tokyo doesn’t have much respect for the aged (stuff).

But as we’ve chronicled here, there IS a secondhand current running through Tokyo.

What are known as thrift stores or op shops elsewhere are called recycle shops (リサイクルショップ) in Japan. These can be anything from a little hole in the wall only a few meters square with a few tired blouses to megaplex chains with multiple floors with catch-all inventory. The most well-known chains are the shops run by Book Off, such as Hard Off (not porn; electronics and hardware), Off House (furniture and home goods), Mode Off (clothes), and Liquor Off. Kinji is another big secondhand chain, as is Treasure Factory, selling mostly clothing and accessories. And there are lots of independent shops too; we’ve written about shops in Harajuku, Shibuya, and Shimokitazawa.

If you’re looking for brand goods and higher end stuff, a few things can often be found at recycle shops, but the real deal for the expensive loot can be found at pawn shops. Daikokuya is a major chain with shops all over Japan, but look out for 質屋 (pawn shop) or just 中古 (second hand, literally says “medium old”).

Flea and antique markets are a great way to find some serious treasures for rock bottom prices. And even more than in recycle shops, bargaining is possible. Since vendors are often eager to offload their goods that they’d rather not drag back home, there are some serious deals to be had: clothing items for 50 or 100 yen are quite common at some of the larger markets. Read more here.

While the aforementioned Book Off chain is probably the king of secondhand books, music, and other media in Japan, Jimbocho is the district to go to if you’re looking for old tomes.

Where do all the confiscated bikes go when their owners have parked them illegally and then neglected to pick them up from impound? Well, maybe some to bike heaven but others are spruced up and resold at the used bike markets.

Tokyo is heaven for shutterbugs – some of the world’s very best cameras are made in Japan and by Japanese companies, and people are constantly updating their gear, leaving a glut of really good second-hand equipment out there for people who want a deal or are looking for some classic clickers. A few shops are Nisshin Camera, Kitamura, (permanently closed), Shimbashi Camera, and Akasaka Camera. A definite bonus to most of these places is the cool old signage, as well as the atmosphere of expertise you’ll find. Japan Camera Hunter has some great resources for photo nerds.

For those who prefer shopping from home, there are a few outlets for you. First off, Zozotown sells new and used clothing at crazy discounts of up to 80%. Yahoo Auction is also a popular site for picking up nearly-new goods (but you’ll need to make an account and be able to use the local lingo). Tokyo Craigslist and Japan Garage Sale (a Facebook group) are some good sources for English speakers, as well as classified rags like Tokyo Notice Board that have lots of “sayonara sale” ads.

Have a favorite second hand haunt? Let us know!

Written by: Selena Hoy
Filed under: Fashion | Shopping
Tags:
Sharing
Questions or comments about this article?
Start a thread on our community forum
Ask our local experts about Tokyo