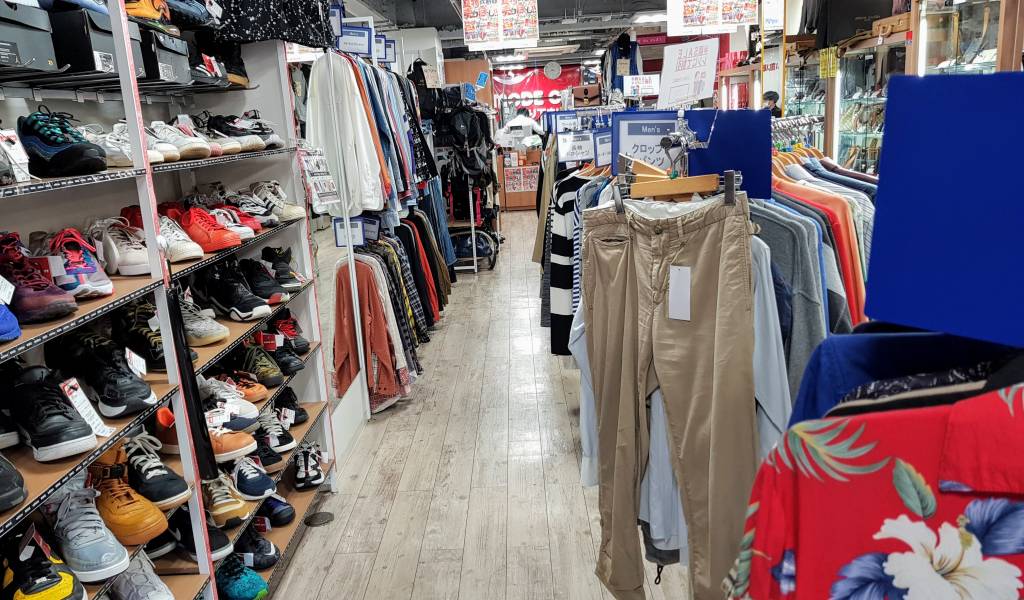 Mode Off - Clothes so Cheap, the Hardest Part is Carrying Them all Back Home

The most difficult part of living in Japan is the fact that everyone looks so presentable, all the time. And by presentable, I mean absolutely immaculate, with flawless make-up, and chic or edgy fashion.

However, the problem with chic or presentable is that both chic and presentable costs money. Looking fashionable in Japan can be a serious financial burden if you only shop at Shibuya 109 or other high-end fashion stores in Harajuku, Shibuya, and Shinjuku.

So the first time I heard about Koenji, the land of vintage shops and cheap clothes, I immediately dragged my fiancé on what ended up being a six hour shopping excursion. I have no regrets. Koenji is famous for vintage: both cheap and incredibly expensive. Being a Cheapo I, of course, ended up looking solely at the cheaper shops and discovered the best indicator on price is, in fact, the smell of the store. In Koenji, if it smells like a normal, clean store, it probably has cheap clothes. If it smells rustic and warm, like the inside of a used bookstore, get out. Fast. Worn out jackets and shoes can easily be up in the tens of thousands of yen.

And then there’s Mode Off.

Mode Off is the hidden gem of Koenji, and hands-down the cheapest clothing store I have ever had the pleasure of visiting. It is one of the “Off” chains, like Hard Off (cheap hardware and electronics), Off-House/Home-Off (cheap home appliances and clothing), Hobby Off (cheap stuffed animals, figurines, and collectable cards), Garage Off (larger appliances), and Book Off (cheap books).

The women’s clothes section was, of course, the largest. It took up the entire bottom floor. Things were divided based on type (skirts, pants, dresses, jackets) with a special section for brand-named clothing. I originally skipped the brand-name section, thinking it would be too expensive.

Then I went back and realized that, brand-name or not, everything in Mode-Off was incredibly cheap. To make it even better, some of the (already cheap) clothes were on an even further sale.

The second floor was divided equally between the 300 yen rack and the men’s section. Surprisingly, the men’s clothing was much more expensive than the women’s section, due to the fact that all of the men’s clothes were either vintage or from a famous brand.

However, expensive at Mode Off is still a great deal cheaper than anywhere else in Tokyo. Rather than 500yen for a jacket, it was closer to 1,500yen. My fiancé was a little disappointed, but was still able to walk away with a wonderful baby blue, wool pullover for only 1,000 en.

The 300yen rack was a miracle in itself. They had dresses, skirts, blazers, shirts, and full-length winter coats. They even had a faux fur section. And everything was still only 300 yen.

At checkout, they were kind enough to provide us with two large cloth bags so we could lug our purchases all around Koenji. No crinkly plastic bags for us, we were shopping in style. I spent the rest of the day as a walking billboard for Mode-Off.

At Mode Off I got:

Total: 4,600 yen for 9 items. It turns out it is possible to buy cheap clothes in Tokyo.

Mode Off
Official Website ⚠️ Link in Japanese
Depends on location, but mostly 11:00 - 21:00
Written by: Grace Buchele Mineta
Filed under: Shopping
Tags:
Sharing
Questions or comments about this article?
Start a thread on our community forum
Ask our local experts about Tokyo