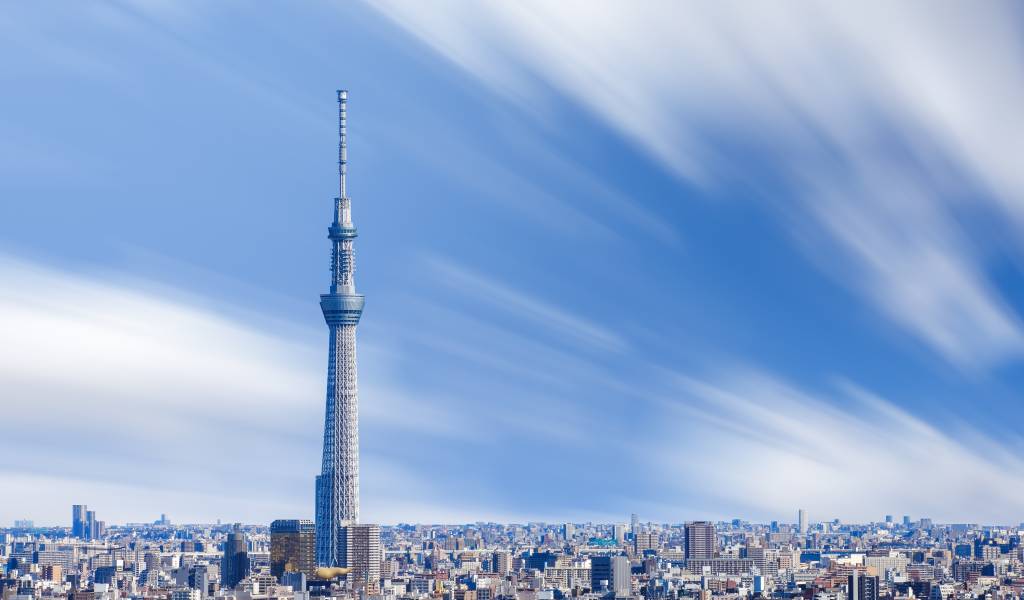 Tokyo Skytree - Everything you need to know before you visit

We usually recommend free, less-crowded alternatives to Tokyo Skytree, but if you’re set on visiting the tallest tower in Japan. Here’s our list of tips and tricks that you can use to save money at the super-tall tourist attraction. One could say we’ve reached new heights with this article (we can’t promise not to be punny, but you should keep reading anyway).

Tokyo Skytree: What to know before you go

You’ve probably heard that Tokyo Skytree is the tallest structure in the world, built like a pagoda, and all sorts of other stories. Parts of these are true. Firstly, it is the tallest structure in Japan, currently, at 634m. It’s the second-highest in the world, falling short of the 829.8m Burj Khalifa tower in Dubai — but since the Middle Eastern building is technically classed as a skyscraper, Tokyo Skytree wins the title of the world’s tallest tower. Now you know. And yes, it was built using the same principle as pagodas; relying on a central pole to keep everything nice and stable.

Despite the massive crowds that suggest the contrary, Skytree’s primary use is that of a broadcasting tower. It beams out both TV signal and radio waves for national broadcaster NHK, as well as TV Asahi, TV Tokyo, and a number of other channels. Until Skytree officially opened in 2012, the 332.9m Tokyo Tower was the main structure in the business of transmission.

Right, now for the money-saving part. No matter what you do, Tokyo Skytree is, at the end of the day, one of the city’s pricier tourist destinations. That said, there are ways to slash the costs.
tl;dr: This discount Skytree ticket is a good hack.

Walking around the bottom bit of Skytree and window shopping in Skytown, or Solamachi (the surrounding shopping and entertainment area), is free. A lot of people go no further than this, happy to crane their necks skywards and snap pictures from the tower’s base. If you want to see the view from the top, you have different ticket options.

Basic tickets to Skytree in Tokyo

A basic adult ticket for Tokyo Skytree that you buy on the day costs ¥2,100 on weekdays and ¥2,300 on holidays, and gives you access to the first of 2 observation areas, the Tembo Deck. At 350m, this gives you an awesome view over the city — and all the way to Mount Fuji on clear days. If you buy the Combo Ticket for ¥3,100 on weekdays and ¥3,400 on holidays you can ascend another 100 meters to the Tembo Galleria. Here’s the first way to save money — make do with the 350m deck. The views from the higher one aren’t much different.

Food and souvenirs at Skytree

There are restaurants on the observation levels of Tokyo Skytree, but our yen-preserving tip is to skip ’em, taking in nothing but the view. It usually works out cheaper to eat at one of the places in Solamachi, like frugal family favorite Denny’s. If that’s not your jam, the food court is a better bet than the fancy joints. Serious cheapos, however, take their own snacks like sandwiches and rice balls, pre-packed or bought from a supermarket or convenience store.

As for souvenirs, you’ll be tempted to take home a cute plushy, Skytree-shaped cake or some other memento — but this is not the place to do the bulk of your gift shopping for friends and family back home. Instead, take a look at these 25 cheaper souvenir ideas.

If you want to appreciate the architectural feat from a little further away, and save your blood pressure and bank balance in the process, you can head to nearby Asakusa, which is just across the Sumida River. Pro tip: Head to the free viewing deck at the Asakusa Culture Tourist Information Center where you can enjoy views of the Tokyo city skyline, including Tokyo Skytree.

Asakusa is Tokyo’s old downtown area, home to the must-see Sensōji Temple, as well as Japan’s first cinema and lots of other cool things. It’s well worth taking a couple of hours to explore.

While we do our best to ensure it’s correct, information is subject to change. Post first published in July, 2017. Last updated September, 2022 by Maria Danuco.

Written by: Carey Finn
Carey's Tokyo favorites are: artless craft tea & coffee
Filed under: Sightseeing
Tags:
Sharing
Questions or comments about this article?
Start a thread on our community forum
Ask our local experts about Tokyo