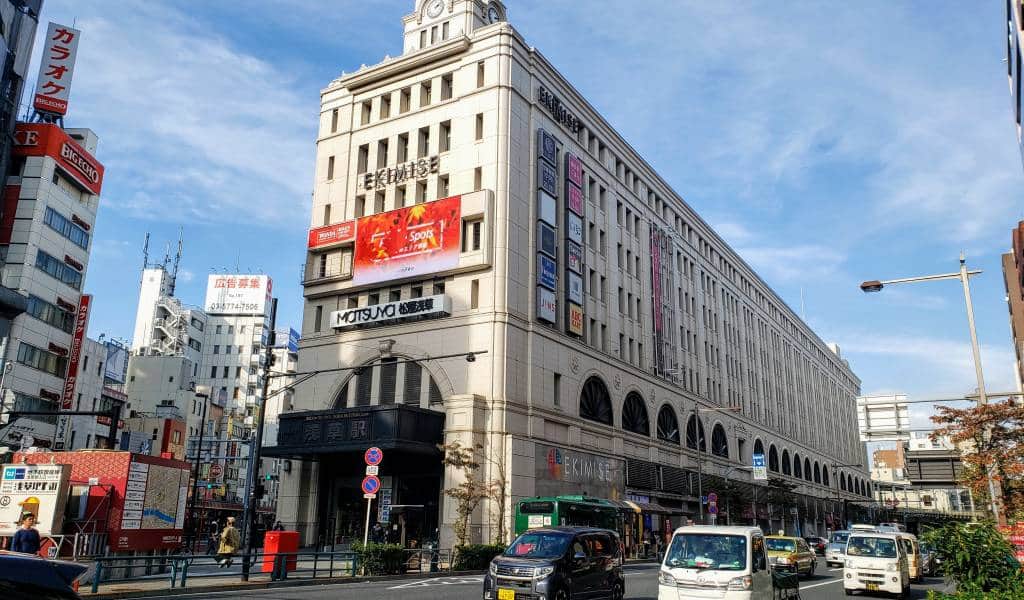 Whether you’re here on vacation or living in Tokyo for the long haul, there’s a very high chance you’ll spend a little time in Asakusa. The area has Sensoji (the city’s most famous temple), the towering Tokyo Skytree and the foodie mecca of Kappabashi Street, offering plenty of reasons to make a visit. There’s one extra reason to add to that list: the Matsuya Asakusa shopping center (not to be confused with the restaurant chain).

Sitting just a three-minute walk from Asakusa Station, this impressive piece of architecture was groundbreaking in terms of design, concept and cultural influence. It’s also home to a whole bunch of modern and classic Japanese retail outlets, but its biggest drawcards are a little less obvious, here’s everything you need to know.

The history of Matsuya

Without getting too caught up in the dropping of names and reciting of dates, it’s worth at least getting a quick rundown of how Matsuya Co., Ltd became one of Japan’s longest-serving retail names. There are a few interesting little tidbits along the way.

The company was founded in 1869 when the first store, the Tsuruya Gofuku Store in Ishikawa-cho, Yokohama City, was opened. The store ran as many of their contemporaries did at the time, but 30 years down the track in 1901, the company started to branch off from other typical retail outlets. They began flirting with Western-influenced fashion and culture, and during this time started showcasing international trends. For men, this meant lavish Inverness coats (think frilly, almost Dracula-style coats) and for women Panama hats, and low pompadours.

The early 1900s was a time of many ‘firsts’ for the company, in 1906 Matsuya employed their first ever female staff member, then in 1907 the store expanded and became the first real department store in Tokyo.

Another fun fact is that the company masterminded the famous New Year’s mystery grab bags known in Japanese as ‘fukubukuro’. Like an adult-style lucky dip, fukubukuro have become a staple of the Japanese retail landscape and are still usually sold during the New Year’s period. Customers can’t see or select what’s inside these mystery bags, but the cost of the bag is significantly cheaper than the retail price of the accumulated items, making them a bargain hunter’s delight.

A little later on (1925), the Ginza store was launched and was such a roaring success that it wasn’t long before our star of the piece, the Asakusa Store, was opened in 1931.

When it opened, the Asakusa store was designed to incorporate the Tokyo terminal (Asakusa Kaminarimon Station) of the Tobu Railway, which connected the city to Nikko. At the time, the two-in-one design concept (transport and shopping hub) was the first of its kind and was considered a little out there. But in retrospect, it paved the way for the transport shopping hubs we see in Shibuya, Shinjuku, and Ikebukuro—and practically everywhere else—today.

When it first opened, Matsuya Asakusa also featured a rooftop amusement park and was the first of its kind. Known as ‘Playland’ it featured a petting zoo and a gondola ride, and ran from the birth of the center up until 2010.

So with the history covered, now it’s time to get to the practicals of Matsuya Asakusa. The store is home to an eclectic family of long-loved Japanese retail outlets. To be perfectly honest on a surface level, when it comes to fashion and retail offerings it’s not that much different to many of the city’s other major retail outlets, like say the Takashimaya department store, or Isetan. However what makes Matsuya Asakusa special is what’s tucked below ground level.

On the first floor and in the basement is where you’ll find Asakusa Sweets Komachi (L1) and Asakusa Gochiso Yokocho (BF). As its name alludes, Asakusa Sweets Komachi is home to one of the best, most comprehensive collection of sweets outlets in the area. From traditional offerings like mochi (rice cakes), dango (sweet rice dumplings) and the most delicate-looking little cakes you’ve ever seen, there’s no better place to rack up that dentist bill or grab some gifts to take home.

The sweets highlights reel includes Asakusa macarons from Boul’mich, macarons with photo-realistic images of the Asakusa printed on them. Funabashiya, a store that sells simple but delicious mochi covered in sugar syrup and kinako (soybean powder). Finally, don’t miss Mangando, home to ‘potato’ kintsuba a rather subdued-tasting sweet made from sweet potato, usually made from red bean paste; this version is an Asakusa specialty.

Asakusa Gochiso Yokocho is a little broader reaching regarding offerings. A more traditional incarnation of a depachika (basically food section of a department store) you’ll find an endless array of bento boxes, fresh fish, meat, picture-perfect fruit and enough sake to keep you buzzed for the next decade.

For those just here on vacation, the department store is definitely worth marking on your map as it’s home to all your practical tourist necessities. On the first level, you’ll find a tax refund counter. If anything you buy in the store exceeds ¥5, (excluding tax) you pop by here and can get your consumption tax refunded.

Also on the first floor, you’ll find a currency exchange counter and ATM that accepts international cards which is still a surprising rarity here in Japan. There’s also a YAMATO Transport Service Counter, so if you do go overboard with the shopping, you get everything sent straight to your hotel.

Although it’s one of the oldest underground shopping streets in Japan, The Asakusa Underground Street (Asakusa Chikagai) is still a relatively well-kept local secret shared between the local Asakusa community. Sitting practically right underneath Matsuya, it’s a charmingly dilapidated labyrinth of classic, usually super-cheap restaurants, and old shops that look like they haven’t been renovated or redesigned for the past 50 years because they probably haven’t. If you do make your way to Asakusa, be sure to put aside some time to explore this untouched corner of old Japanese street culture.

A visit to Matsuya is a natural addition to your Asakusa itinerary, as it sits right by so many of the other major tourist attractions in the area. From Matsuya, Sensoii Temple is a five-minute walk north, Sumida Park and Sumida River are both literally right next door. Also worth visiting for a little old-world Tokyo adventure is Hanayashiki Amusement Park which is less than 10 minutes away. Tokyo Skytree is about a 20-minute walk east across the river.

How to get to Matsuya Asakusa

From Shibuya: It’s an easy 36-minute journey on the Ginza Line from Shibuya Metro Station to Asakusa Station. From there it’s a three-minute walk.

From Shinjuku: Take the Chuo or Chuo Sobu line to Asakusabashi Station Subway, then switch to the Asakusa Line and get off at Asakusa Station.