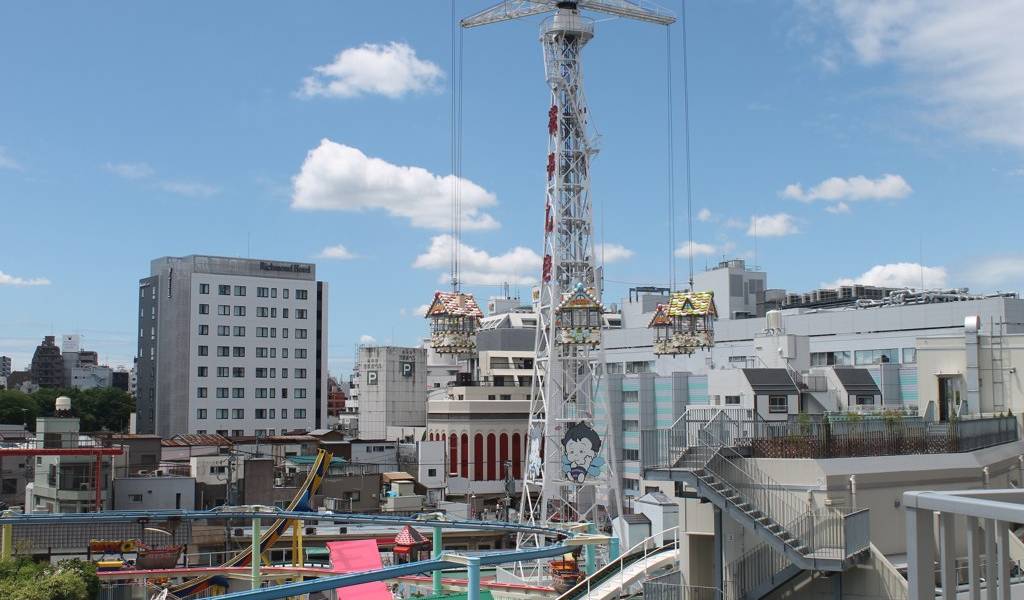 Quick! Name an amusement park in Japan. Tokyo Disney Resort and Universal Studios Japan (USJ) will probably come to mind. But what about we focus on a homegrown Japanese theme park for a change? It’s time to get acquainted with Hanayashiki, Japan’s first and oldest amusement park.

A mere 5-minute walk from Asakusa Station, also where you can find the famous temple Senso-ji, Hanayashiki has been around since 1853, when it originally began as a flower park. Its management gradually added more attractions, including a mini-zoo (which no longer exists today), until it became an amusement park. Nowadays, being a tiny, densely packed amusement park surrounded by tall buildings that are extremely close to the rides, and with rides that have seen better days, its age is evident, but it’s worth a visit for a glimpse of an old-school Japanese amusement park.

Admission is 1,000 yen for visitors aged 13-64 years old, 500 yen for elementary students and senior citizens, and free for the handicapped and children below 6 years old. In addition to admission, you have to pay per ride, with a ticket costing 100 yen (although most rides require at least 2 tickets). At times, they also offer student discounts, but only for those who can present a valid Japanese school ID. If you intend to make the most of your visit, you might want to get a free ride pass, which costs 2,300 yen. Note, though, that you’ll still have to pay for admission. Since not all attractions are worth checking out, we recommend just paying for admission and each ride.

Hanayashiki is one amusement park that knows how to maximize its minimal space, with some attractions weaving around one another. They’ve got your standard amusement park fare: a merry-go-round, panda cars that go around the park, a ferris wheel (which is quite small, so don’t expect it to be scenic), a dark ride called Thriller Car, a not-so-scary haunted house, a 3D theater, some kiddie rides, a drop ride called the Space Shot, a spinning ride called Disk ‘O’, and a roller coaster. Built in 1953, its roller coaster is the oldest steel-track type in Japan, and it operates at a maximum speed of 42 km per hour. It’s quite old-school in that it’s a short, simple ride — no crazy loops or anything.

Be sure to check out the Bee Tower, which is considered as a symbol of Hanayashiki. You board cars shaped like candy houses, and are taken to a height of 45 meters, giving you a scenic view of Asakusa. You can see Senso-ji, the Tokyo Sky Tree, and the golden flame (which doesn’t really look like a flame) atop Asahi Breweries.

Perhaps as a homage to or remnant of its days as a flower park, there’s also a tiny garden and pond area, which you can view from the Bridge of Happiness. The park also holds performances and shows, although non-Japanese speakers might have difficulty understanding them. Sometimes, the park has cosplay events, so you just might run into cosplayers posing for photos at Hanayashiki!

While Hanayashiki is more kitschy fun than important national heritage, it makes for a fun trip down memory lane, especially for small children. While it’s obviously not of the same scale as Disneyland or USJ, it’s an alternative worth considering if your goal is just to keep your kids entertained. Adults should also be able to appreciate Hanayashiki for the sense of nostalgia it evokes.

Open with Maps
Hanayashiki
Asakusa 2-28-1, Taito-ku, Tokyo
Asakusa
Official Website
03-3842-8780
10:00 am-6:00 pm (subject to change depending on seasons and weather)
Written by: Tiffany
Filed under: Family | Lifestyle | Things to do
Tags:
Sharing
Questions or comments about this article?
Start a thread on our community forum
Ask our local experts about Tokyo