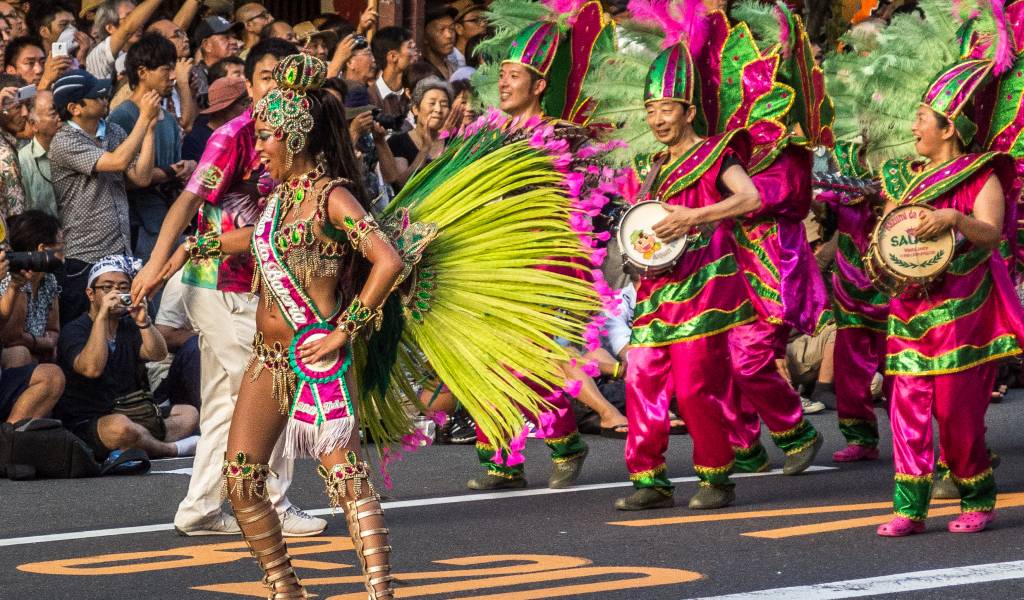 Pic: Grigoris Miliaresis
Sharing
We are yet to confirm the dates and details of this event.

The 39th Asakusa Samba Carnival originally scheduled for August 2020 was postponed in that year, again in 2021, and sadly, in 2022 as well. However, in its place we have an alternate event—the Asakusa Samba Festa.

This year, instead of a parade on the streets of Asakusa, there will be a show, talks, and exhibition in the Asakusa Culture Tourist Information Center. Exhibition from 11 a.m. to 5 p.m. on both days.

Note: They will be watching numbers, so get there early for admission.

<!–At Asakusa's 39th Samba Carnival, you are guaranteed to see the most dazzling array of beautiful telephoto lenses that you have ever witnessed—and the dancers are quite nice too! But seriously folks, this has become one of the major summer festivals in Tokyo.

Reflecting Japan’s close ties with Brazil (Brazil has the largest Japanese diaspora in the world) the festival sees 18 ‘teams’ compete for the title with samba floats, drummers and of course dancers with tiny costumes and enormous feathered head dresses.

The carnival kicks off at 2:00 pm on Saturday, September 25th, 2021—and should be all over by 6:00 pm. The parade route follows a dogleg through Asakusa with Asakusa Station right in the middle so if you don’t want to be stuck in the crowds, either turn up early or go to Tawaramachi Station on the Ginza Line which is located close to the finishing point of the parade.

And now a word from our man on the ground Grigoris

–>
The tips below are from Asakusa and samba enthusiast and photographer extraordinaire Grigoris. They apply to the carnival rather than the festa, but the photos are too good not to include.

As happens with its cousin, the Rio Carnival, the Asakusa Samba Carnival takes place on one street—in this case, Kaminarimon Dori, the street passing in front of Sensoji Temple’s Kaminarimon Gate. Most people opt for a spot near the Kaminarimon, in the intersection with Namiki Dori so they can take a picture of the dancers with the gate in the background (everyone loves a cliché).

The actual length of the “sambodrome” is rather small—5-6 blocks’ worth—so pretty much anywhere along it will be good. Both sides of the street are OK but the seats for the judges are on the side opposite of the Kaminarimon (i.e. left as you face Kaminarimon Dori with the Sky Tree in your back) so any place close to these seats is good (plus, on that side of the street you get a little more shade—this is a 5-6 hour event, remember?)

Personally, I prefer that area since the dancers put up a big show there because (a) this is where the judges are and (b) because after that it’s only a few meters until the entrance of Sushiya Dori and the finishing line so it’s their last chance to shine (and pose).

If you care for more candid photos of the dancers, I’d suggest going either to Umemichi Dori (at the entrance of Kaminarimon Dori) where the crews make their entrance from or to Kokusai Dori (at the end of Kaminarimon Dori) which is where most exit from. You’ll miss the actual dancing but you’ll get a chance to see the dancers from up close and probably take a picture with them (if taking a picture with a 180 cm/5’9 samba queen is something you’re interested in).

Also good for such pictures are the streets running parallel to Kaminarimon Dori in the south—many crews return to their accommodations using these. By the way be prepared for a culture shock/stereotype demolition: despite their unmistakably Brazilian appearance these girls (and guys of course; I’m not making any assumptions here) are Brazilian-Japanese who either live in Japan or have flown in for the event so their Japanese is pitch-perfect.

Standard warnings apply: many, many people (conventional wisdom estimates them at 500,000) and most of them arrive early to get the good spots so if you want to have a good view, come early. Oh, and unless you are a camera otaku, find a spot allowing you to stand—the samba spirit is contagious so at some point you’ll definitely want to dance (or at least sway) and you can’t do that sitting down.

Have a great time!